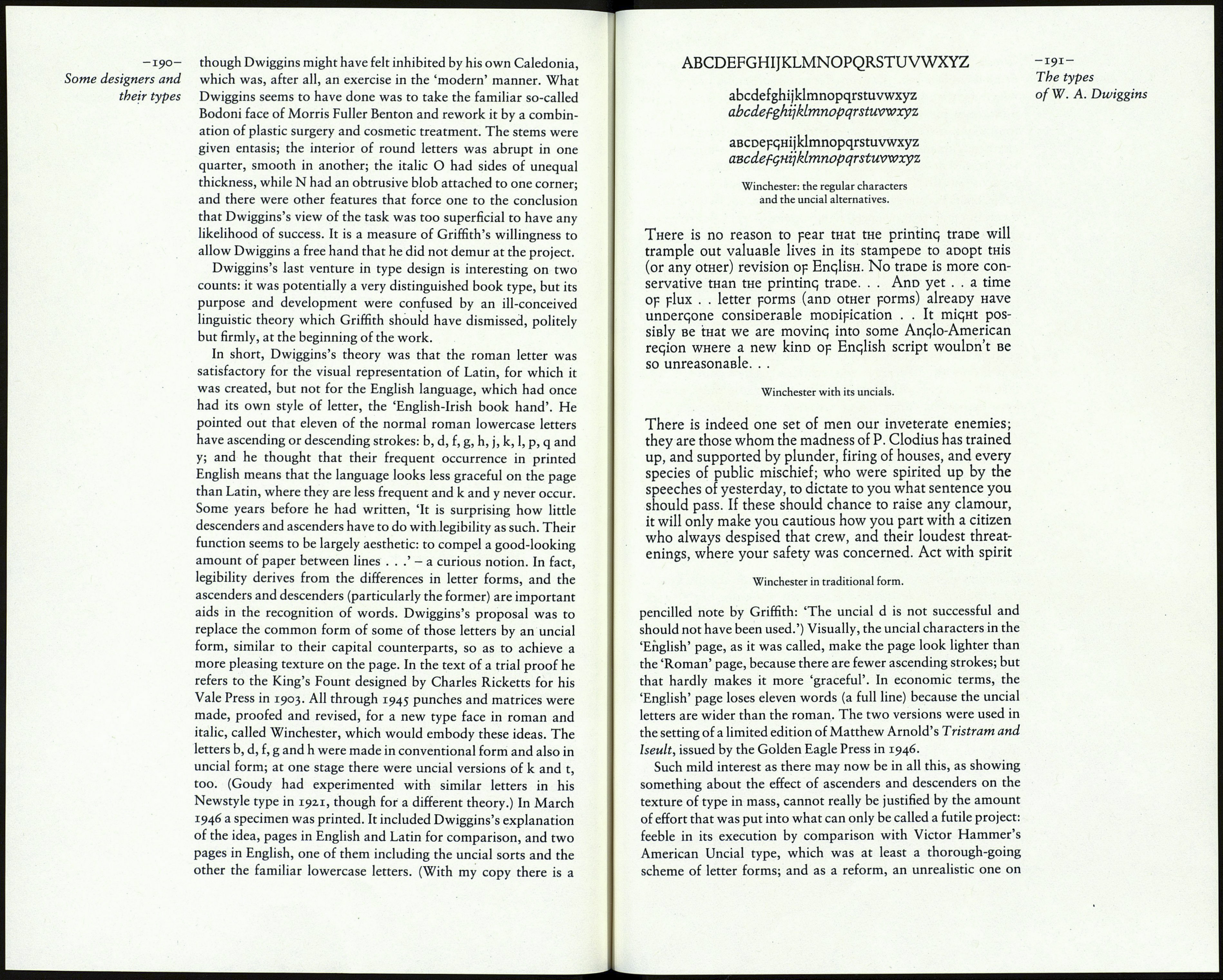 -i88- another book type. Once again Updike's Printing Types had pro-
Some designers and vided Dwiggins with a line of thought: the few lines of roman
their types shown at the foot of a page in the specimen book issued by J.F.
Rosart in Brussels soon after 1760 (Updike, figure 214). It is a
clumsy piece of punch-cutting, but Dwiggins liked the 'metallic'
look of the face and the 'fat terminal bulks - these come out as
little black accents . . .' After a long period of trial and revision
the type that emerged, named Stuyvesant by Dwiggins, had little
evidence of 'metallic' quality in its roman; but the emphatic blobs
are there, in the terminals of a, f and r, and the dots of i and j.
Apart from those the roman, a narrow old style, has no distinc¬
tive characteristics; it is a pleasant enough face, but it has none of
the 'well-fed robustness' that Dwiggins said he saw in the Rosart
type. The italic is less attractive -noticeably 'modern' in style and
therefore at odds with the roman. The C, G and О are awkwardly
angled. Postscripts says Stuyvesant was used in The Shirley
Letters published by Knopf in 1949, but the design was never
developed beyond the 12 point pilot size.

As already said, Stuyvesant was an old style. It appears to be a
contradiction, then, to read in Postscripts that, commenting on
the early trial letters of the Arcadia design which were proofed in
June 1943, only a few weeks after the trial characters of Stuyves¬
ant, Dwiggins wrote, 'I am convinced that a narrow, soft, old
style treatment doesn't belong. The letter needs to be round and
crisp . . .' But what he probably meant and Griffith understood
was that if Arcadia was continued in the style of its first trial
letters the type would turn out too much like Stuyvesant; so it had
better be revised. A surviving proof shows a distinct reduction in
stroke weight and contrast in the redesigned version of the trials.
The finished type face, when the 12 point roman and italic were
completed in 1947, was a design that could only have come from
the hand that created Electra, lacking the subtle modelling ofthat
type but with an agreeable italic. Its most serious fault was in its
numerals: the 2, 3, 5 and 9 are surprisingly inept. Arcadia was
used for the text of Alfred Knopf's Some Random Recollections,
issued by The Typophiles in 1949; but the face was never made
for general sale.

On the title page of Knopf's book the readers had a glimpse of
another experimental face, called Tippecanoe. It was an essay in
'the Bodoni-Didot theme', as Postscripts puts it - though there is
little sign of any of the Didots in it. Dwiggins was right to assert
that all the available versions of Bodoni seemed 'stodgy', making
a book page look stiff and lifeless. That opinion should surely
have sent him back to the originals, to Bodoni's own designs and
to those of Firmin Didot in particular, and his followers Léger,
Mole and Walbaum. A study of the 'classique' types created by
them might have stimulated Dwiggins into producing something
original and interesting, as Imre Reiner did in his Corvinus type -

Mencken and Nathan for The American The types

Mercury and it was only natural to turn over °* ' WiSgtns

the complete design of the magazine to El¬
mer, who also did the initial prospectus and
much other printed matter that we got out in
connection with it. We had planned to have
the magazine printed by the Rumford Press
and, indeed, they had set a good deal of the
matter bought for the first couple of issues.

From Alfred Knopf's Some Random Recollections.

separation from Beacon Street and the Province Club?
There is a tendency among non-New Englanders, we be¬
lieve, to associate Bostonese—at least Bostonese of the
Apley brand—with an English accent of broad "a's,"
slow syllables and shortened vowels. But a writer in a
current bulletin of "The Atlantic Monthly" warns New

Tippecanoe, compared with Bodoni, below.

from Beacon Street and the Province Club ? There is a
tendency among non-New Englanders, we believe, to
associate Bostonese—at least Bostonese of the Apley
brand—with an English accent of broad "a's," slow
syllables and shortened vowels. But a writer in a cur¬
rent bulletin of "The Atlantic Monthly" warns New