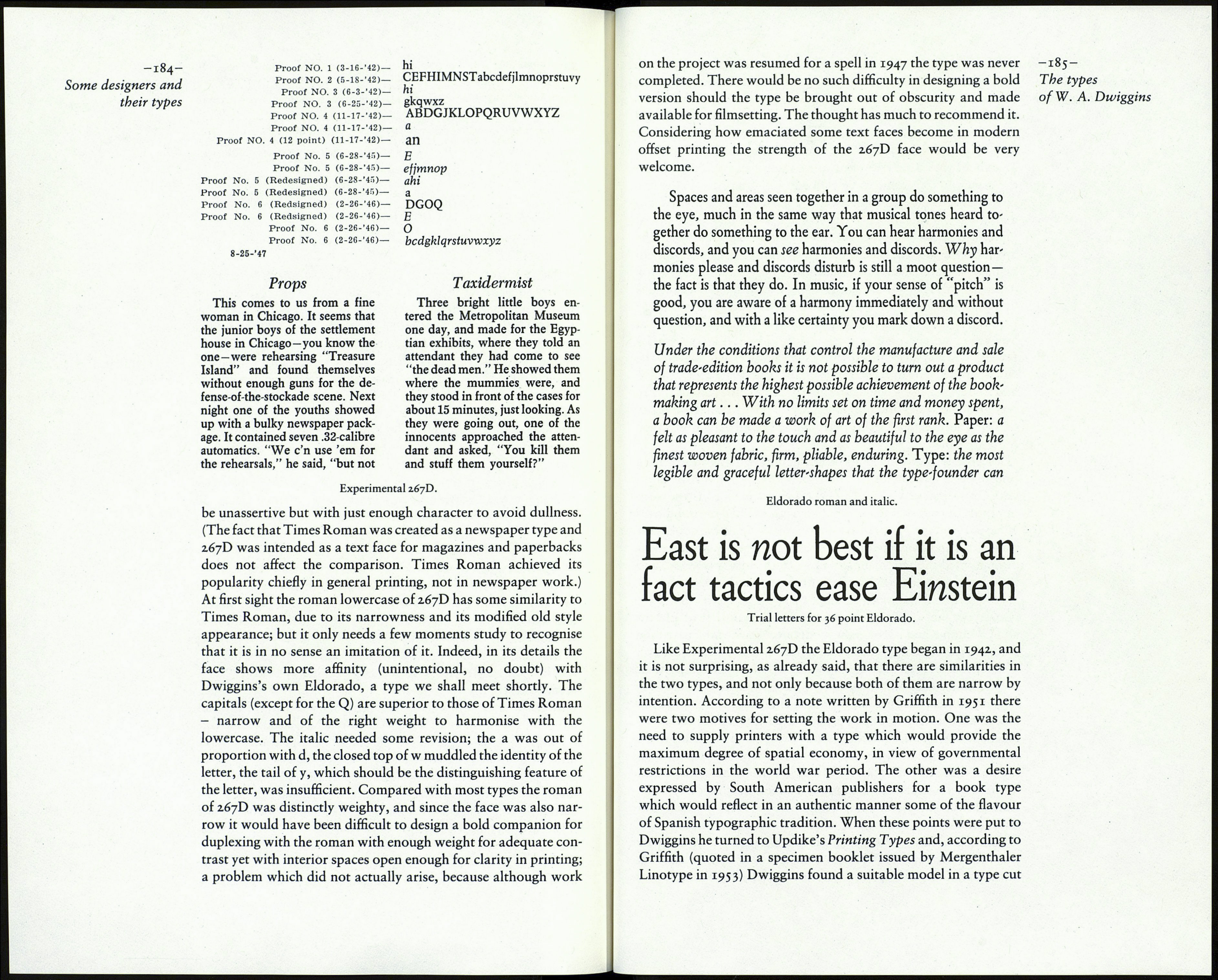 -i82- American name for Koch's Locarno.) That suggests a type inten-
Some designers and ded for the text of advertising material for, say, a fashion house
their types or a hotel chain. But the type seems too decorative for anything
more than a line or two. There is another possibility. Griffith may
have told Dwiggins that Linotype did a steady trade with the
printers of wedding and other social stationery, and an alterna¬
tive to the well-known Card Italic and Lino Script would be
useful. Charter was an informal letter (except for e), upright but
suggestive of script, though the letters did not join. Only the
lowercase was made; trials of an ornamental 'Tuscan' T and V
and a script M were not taken further. In 1946 the type was given
a selective public showing in (surprisingly) book form - a limited
edition of Andrew Lang's Aucassin and Nicolete, produced by
the Golden Eagle Press at Mount Vernon, New York. In place of
the non-existent font capitals the small capitals of Electra were
used. The general effect is charming at first sight, affected at a
second view, and not very useful as a specimen of what was
obviously not a book type. Charter was never completed for sale
to the trade.

Soon after Dwiggins began his association with Linotype he
evidently felt that he should contribute to their activity in news¬
paper type designing. Griffith, who was much involved in the
development of variations of the Ionic type and anxious about
their commercial success, firmly asked him to stay away from
the subject. It was not until 1936, when the 'legibility group' of
newspaper text faces - Ionic, Textype, Excelsior, Opticon and
Paragon - were clearly on the way to dominating newspaper
typography in America (and, indeed, in most of the world), that
Griffith felt able to attend to Dwiggins's ideas and experiments.
But on this subject it appears that Dwiggins was able to say more
than he was able to perform. In a letter to Griffith in 1937 he
referred to Ionic and the derivatives as 'the first intelligent effort
in the line ever made . . . You have taken the style of letter est¬
ablished by custom as "the" newspaper face, and have modified
it step by step until it will print under modern conditions, and can
be read when printed . . . This style was taken over for historical
reasons. It was the style of type-letter in fashion when news¬
papers began their expansion after the Civil War, and when
Linotype began its career. There wasn't any other kind of letter to
work on, so far as body matter went. So, naturally, Linotype's
experiment fastened upon this style, and by so doing fixed it as
the only kind of type face proper for newspapers to use. The style
was (and is) a much-modified bastard descendent of an original
"Scotch modern". In its post-bellum form it was not what one
could call a highly legible face.' That was sound enough, and
Stanley Morison would have applauded it - having expressed
similar ideas (though not so well) when his Times Roman was
introduced five years before. Unfortunately, the implication in it

The captain was still prowling about
the deck. Hubbard heard him lift up
his voice in a hail, "Masthead, there!
Keep your wits about you!"

The poor devil of a lookout up there
was the most uncomfortable man in
the whole ship, Hubbard supposed,
without sympathy for him. It was in¬
teresting to note that the captain was
apparently a little uneasy still about
the possible appearance of British
ships. Peabody had brilliantly brought
the Delaware out to sea—the first
United States ship to run the blockade

was a touch of elaboration about his
gesture which conveyed exactly
enough contempt both for the cere¬
mony and for the first lieutenant to an¬
noy the latter intensely, and yet too
little to make the captain's clerk liable
to punishment under the naval regula¬
tions issued by command of the Presi¬
dent of the United States of America—
not even under that all-embracing reg¬
ulation which decided that "all other
faults, disorders and misdemeanors not
herein mentioned shall be punished ac¬
cording to the laws and customs in
such cases at sea." The young cub

- that any alternative news face would have to arrive from an
entirely new direction — was not borne out by the result. In spite
of much experimental work, recently described in detail by
Gerard Unger, it looks as though Dwiggins was unable to put the
Ionic out of his mind, and could only think of altering its details.
In the event, the Hingham design was so much like the Ionic it
was meant to surpass that it is now chiefly interesting as evidence
that he was being allowed by Griffith (rather reluctantly, in this
case) to free-range over a wide area of typographic possibilities.
(As it happened, it was Griffith himself who carried the design of
newspaper text types to a new level, with the Corona face of
1941.)

A design not mentioned in Bennett's Postscripts and never
named - it was known only by its factory number Experimental
267D - is a type of particular interest, for several reasons. In
February 1942 Griffith sent Dwiggins a number of working
drawings for study purposes, including a projection of a letter
of 9 point Times Roman; and in a covering note he said, 'On the
whole I think we have made a sound approach to the original
problem of finding a face with the reading qualities of Bookman
and a style somewhere in the region of Caledonia and Times
Roman.' Plantin must also have been in their minds, because later
in that year Griffith thanked Dwiggins for his analysis of the type
and himself remarked on its 'dry and "engineery" effect'. But it
seems to have been Times Roman that concerned them most.
(Griffith was occupied in supervising the production of Times
Roman for the Crowell-Collier company which adopted the face
for the text of its magazines at the end of 1942 in a considerable
flutter of publicity.) Dwiggins referred to 267D in a letter in
December 1943: 'I was always sorry that it had to be laid aside to
make way for the Times Roman cutting, because I think it is a
better reading letter than T R and more useful. As a matter of fact
it is one of the most successful designs in our list, right through
the alphabet . . .'

I think he was right; 267D was potentially a much more
attractive and effective type than Times Roman - plain enough to