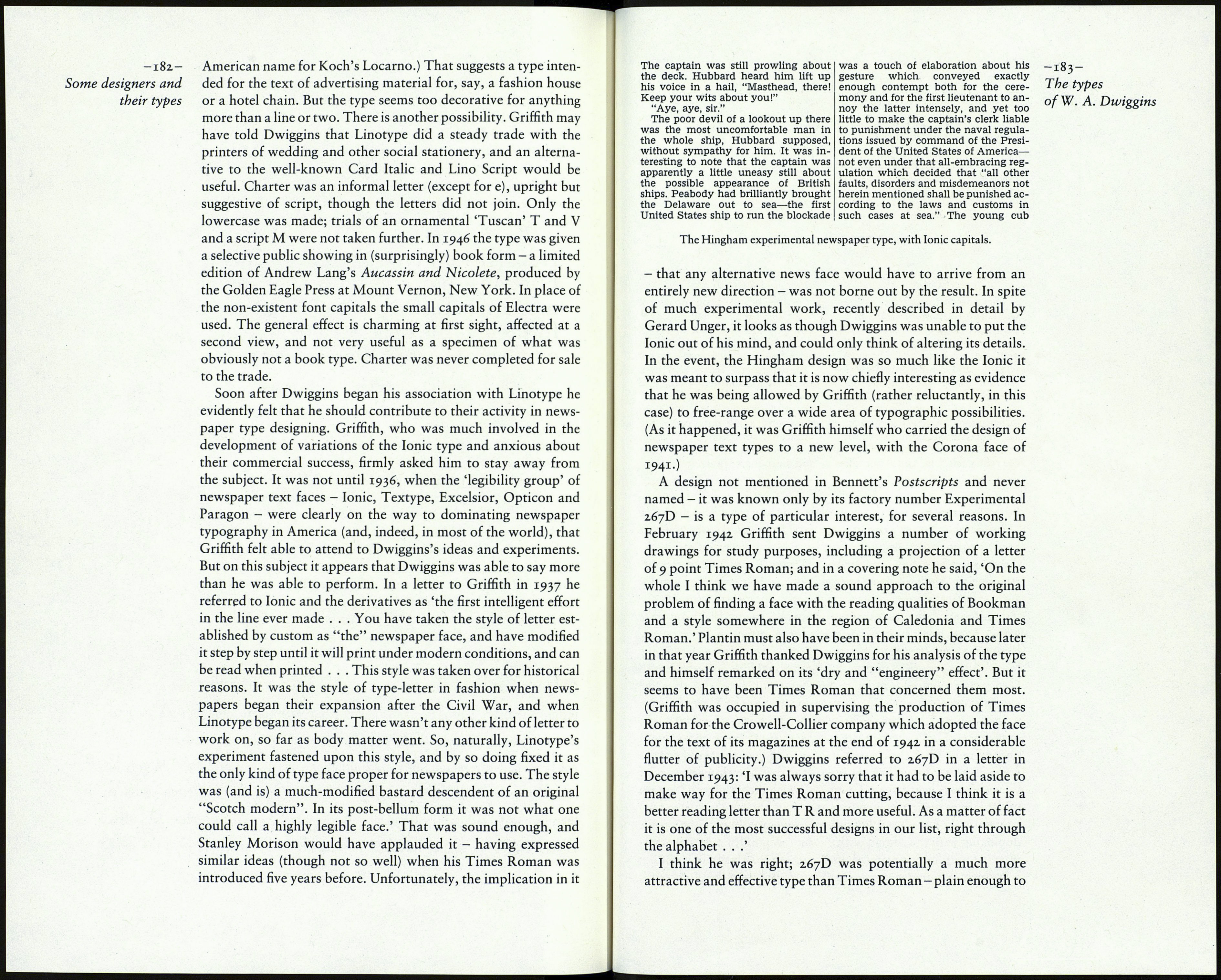 -i8o- Morison's theory, propounded in The Fleuron v, that the proper
Some designers and form for the secondary companion to a roman was a sloped
their types roman. That is what the first 'italic' for Electra was - a sloped
version of the roman, without any concession to the letter forms
of traditional italics, the flowing f, the round a, the looped e, and
so on. Linotype did nothing to inform the printing trade that the
italic of Electra was designed according to a new doctrine. Even if
they had done so it is most unlikely that the face would have
gained total acceptance. It did not; and Griffith and Dwiggins
evidently felt it necessary to produce an alternative italic in

Electra with Electra Cursive, 12 Point. Electra Cursive has sufficient
stress to use with texts for emphasis, as may be noted here. So clever is its
design that only the lower-case letters and the usual T ligatures need be
added to convert outstanding fonts in use. The new Cursive is shown here
in five sizes: 8 to 12 point, inclusive. Linotype's Electra Family comprises

Electra Bold with 'italic' and Cursive.

traditional style. Electra Cursive, as it was called, appeared early
in 1940. It consisted of lowercase and the f ligatures. It was
Dwiggins's first attempt at a normal italic; he was to do better
later. The a looks small; d and u are flat-bottomed; the face lacks
the 'action' that Dwiggins was so keen on. It is this Cursive which
is supplied in the current digital fonts; the original sloped roman
is no longer made. Electra was also given an attractive bold com¬
panion for display setting.

The third type from Dwiggins's hand, his Caledonia, was also
a book face. It appeared in 1938. He wrote that the design of the
roman grew out of a liking for the sturdy version of the modern
face which was developed by some Scottish type foundries in the
early years of the nineteenth century (hence the name Caledonia),
together with his liking for a type cut by William Martin about
1790 and used by Bulmer. Those were severely impassive faces;

Twelve point on foubteen point body. The fine printer begins where
the careful printer has left off. For 'fine' printing something is required
in addition to care—certain vital gifts of the mind and understanding.
Only when these are added to a knowledge of the technical processes
will there result a piece of design, i.e. a work expressing logic, con¬
sistency, and personality. Fine printing may be described as the
product of a lively and seasoned intelligence working with carefully

Dwiggins's design is decidedly more vital and expressive. Much
of its character is due to the slight curve in the terminal of the
stems, easily seen in the display sizes. Even in text sizes that
feature does a great deal to ensure that the face avoids the dour-
ness of Scotch Roman. To my eye Caledonia roman is not so
refined and unassuming as the roman of Electra, which I regard
as one of the best text types designed in this century, but the italic
of Caledonia is better than Electra Cursive. Electra and Caled¬
onia have a permanent place in the American book designer's list
of text types; and Caledonia, which has a good bold companion,

Here is a new type of vigor and dis¬
tinction-sharp, clean-cut, crisply
modern in feeling, with fine letter-
forms and the necessary degree of
emphasis to arrest the reader's eye.

is also frequently used in publicity work on both sides of the
Atlantic.

In 1937, when Caledonia was off the drawing board and in
course of manufacture, Griffith may have asked Dwiggins to turn
his mind to areas of American printing in which the line-casting
machine had an important role. The next two items in the list of
Dwiggins's designs are certainly very different from his previous
work. Charter, a kind of script type, hardly seems the sort of
design that Dwiggins would have thought of without prompting.
It is an interesting effort, though not an important one. In Post¬
scripts on Dwiggins Paul Bennett referred to it as a 'special pur¬
pose' face, but did not specify the purpose. It may be the type
referred to in Dwiggins's letter to Griffith of January 1937: 'I send
a start on the Eve/Cochin/Egmont project. A brochure type
somewhere between Eve and Nicolas Cochin.' (Eve was the

ФТке Council kaue thought meet to appoint c% set apart the 29th. day of this
instant June, as a day of solemn Tkanksgiuing c% praise to God for sucia lais good¬
ness and faoour, many particulars of uukick mercy migkt be instanced, but we doubt
not tkose iwko are sensible of God's afflictions, kaue been as diligent to espy kis
returning to us; and tkat tke Lord may bekold us as a people offering praise c%
tkereby glorifying kirn; tke Council dotk commend it to tke respective Ministers,
Elders and people of tkis Jurisdiction; solemnly and seriously to keep tke same.

The Charter experimental face. The capitals are Electra.