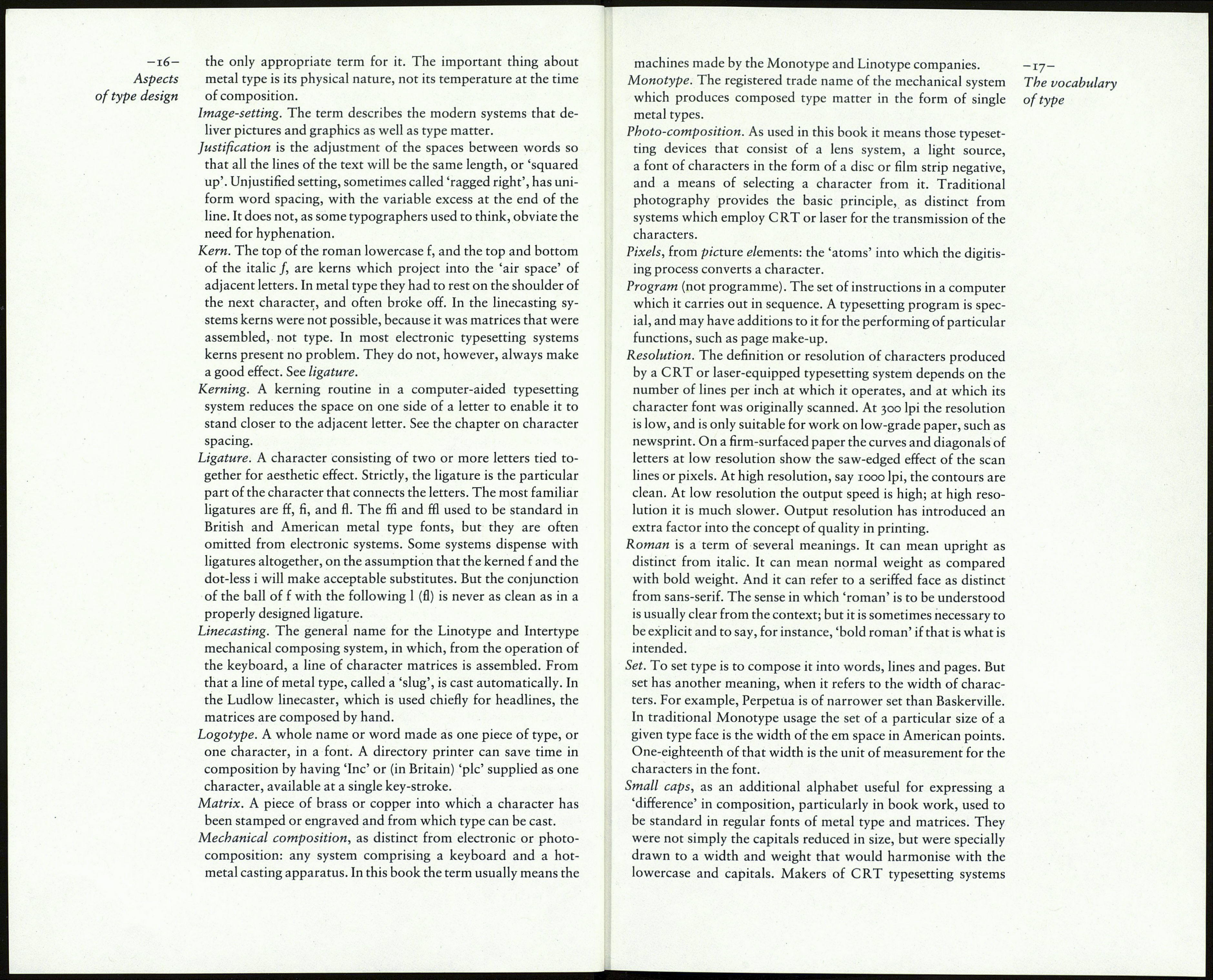 -14- CRT stands for cathode ray tube, the electronic device in some
Aspects high-speed machines which transmits the letter images, formed
of type design of lines or dots, on to the output film or paper.

Digitising. The process of converting the contour of a character,
or the whole of it, into coded data for storage in a computer's
memory. See chapter five for various methods of digitising.

Display. When used in regard to size, it means sizes of type over
14 point. When used about the design of type it means a face
other than a traditional text face, a type of highly-developed
individuality, or an inlined or shadowed version of a basic face,
intended for publicity use.

Dot-less i. An extra character now included in most modern
systems so that accents can be automatically 'floated' into
position over it.

Electronic typesetting. A term of convenience used in this book
for 'cold type' machine typesetting as distinct from metal type
composition. See filmsetting and photo-composition, and parti¬
cularly image-setting.

Face has the same meaning as type, but can be used more pre¬
cisely. Strictly, a type face is one of the sets of characters in a type
family: thus Baskerville roman is one face, the italic is another,
the bold is the third. This point is important when the capacity
of a typesetting machine is being considered.

Film advance. In electronic typesetting, the distance from the
baseline of one line of type to the baseline of the next. Common¬
ly this means that type of say 10 point nominal size will be set on
film advance of 10 point (often called 'solid' setting) or larger,
say iof or n point - though the increment can be by quarter-
point or even one-tenth-point steps, according to the make of
machine. Since the face size and film advance are separately
controlled, 'minus' film advance is possible. It is occasionally
useful in the setting of headlines, but makes a bad effect in text
setting, as the classified advertisement columns of some news¬
papers demonstrate.

Filmsetting. An inaccurate but convenient term for 'cold'
typesetting.

Fitting is the manufacturer's spacing of the characters. See the
separate chapter on the subject.

Fixed spaces. In justified composition the spaces between words
vary in width according to the width of the characters in the line
and whether or not the last word is breakable. Those spaces are
'variable'. Fixed spaces have a definite and unvariable width.
The two basic ones are the em, which is usually the width of the
type size, and the en, which is either one-half the em or as wide
as the numerals in the font. (See the essay on numerals.) The
other fixed space is the thin, generally related in width to the en.
The full-point and comma are usually given that width in faces
that are possibilities for tabular setting.

Font (in Britain it is so pronounced, but spelt fount) is a type -15-
founder's term of quantity: the total number of letters and The vocabulary
other items needed for a particular purpose, capitals, lowercase, of type
numerals, punctuation marks, ligatures, monetary signs, and so
on. The font needed for the composition of a telephone direc¬
tory, with its several kinds of numerals, is different from the font
needed for the setting of a novel. Font is not another word for
type face or design, as some writers have thought - Stanley
Morison, for one.

The strip of negative film on which the characters are arran¬
ged in some photo-composition machines is called a font. The
term is also used for the sets of digitised characters in more
recent systems. Because of the international marketing of such
systems the four-letter spelling of the word (which was the
original form, according to an editor's note in Moxon's
Mechanick Exercises, second edition 1962) is becoming familiar
in Britain and Europe. It is used in this book.

Frisket. Sunday printers will know that the frisket was, and is, a
metal frame with a sheet of paper stretched on it and cut away to
the type area, the frame being affixed to the tympan of a hand
press to hold in place the sheet to be printed. The word has been
borrowed for the piece of transparent laminate, one side red in
colour, on which an enlarged type character is cut out, so that
this 'frisket' can serve as a ready-made negative for photo¬
graphic transferal to a master disc or film font, or as the artwork
in the digitising process. Most current type designs exist in fris¬
ket form.

Gothic. Traditionally, the word has been used for two quite
different sorts of letter: the pen-made letters sometimes called
'black-letter' or 'Fraktur', and the sans-serif form. In this book
gothic means only the first sort, as in the review of Rudolf
Koch's types.

H and J stands for 'hyphenation and justification'. For a com¬
puter justification is a simple matter of addition and subtrac¬
tion. Hyphenation is a different matter. In proper typesetting
words are hyphenated at the ends of lines according to their
syllabic structure. The computer must be provided with a com¬
prehensive list of prefixes, suffixes and roots if it is to hyphenate
the words correctly at the line endings as part of the justification
process. It is sadly clear that in some electronic typesetting the
'dictionary' store is inadequate, or not working properly, or has
been deliberately by-passed.

Hot-metal means composed type matter produced by a
Monotype or line-casting machine. Anyone who has handled
line-cast correction slugs straight from the machine knows that
they are certainly hot. The term can hardly be applied to
foundry-made type, which may have lain in store for a long time
before being put to use by the hand compositor. Cold metal is