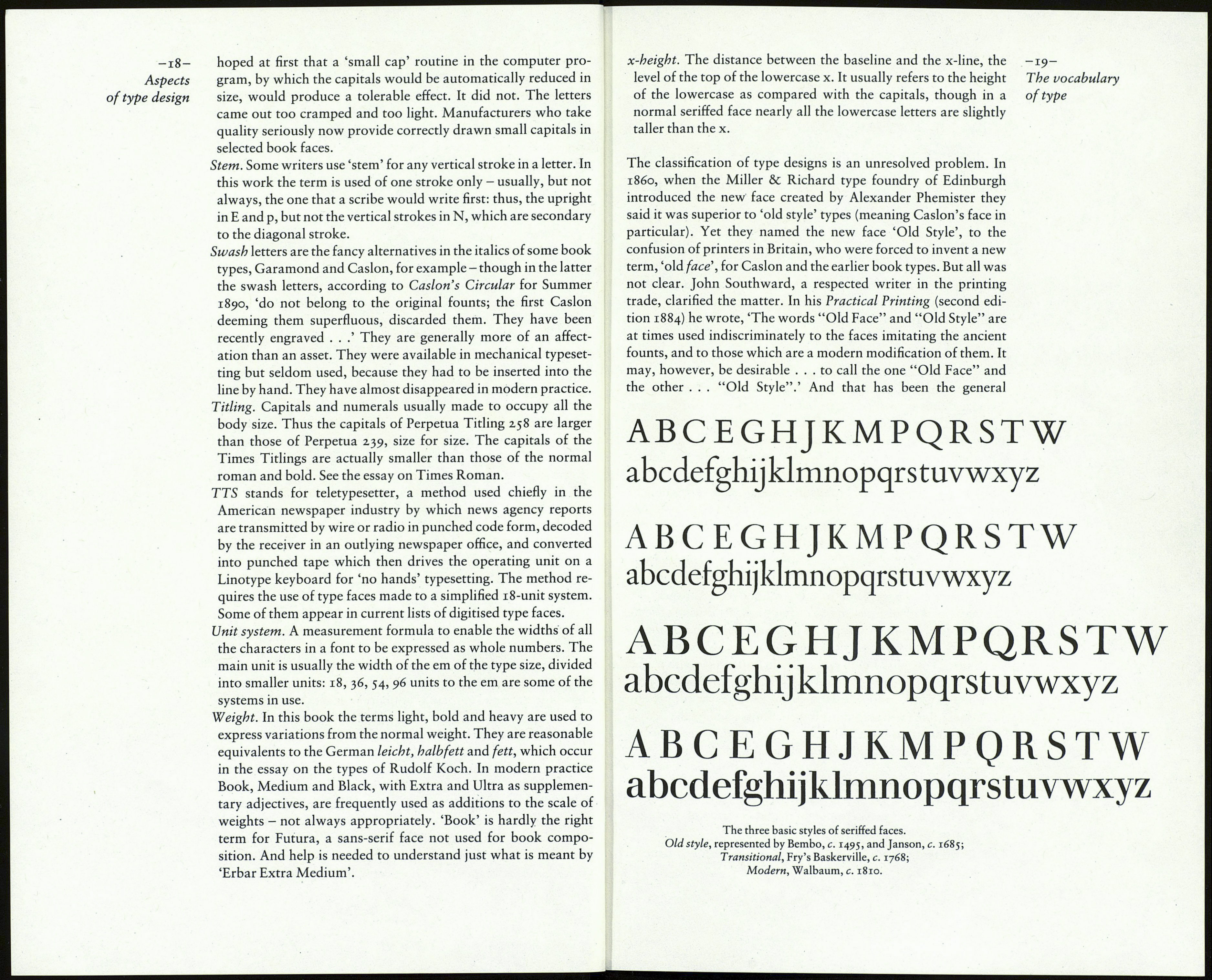 -гб- the only appropriate term for it. The important thing about
Aspects metal type is its physical nature, not its temperature at the time
of type design of composition.

Image-setting. The term describes the modern systems that de¬
liver pictures and graphics as well as type matter.

Justification is the adjustment of the spaces between words so
that all the lines of the text will be the same length, or 'squared
up'. Unjustified setting, sometimes called 'ragged right', has uni¬
form word spacing, with the variable excess at the end of the
line. It does not, as some typographers used to think, obviate the
need for hyphenation.

Kern. The top of the roman lowercase f, and the top and bottom
of the italic /, are kerns which project into the 'air space' of
adjacent letters. In metal type they had to rest on the shoulder of
the next character, and often broke off. In the linecasting sy¬
stems kerns were not possible, because it was matrices that were
assembled, not type. In most electronic typesetting systems
kerns present no problem. They do not, however, always make
a good effect. See ligature.

Kerning. A kerning routine in a computer-aided typesetting
system reduces the space on one side of a letter to enable it to
stand closer to the adjacent letter. See the chapter on character
spacing.

Ligature. A character consisting of two or more letters tied to¬
gether for aesthetic effect. Strictly, the ligature is the particular
part of the character that connects the letters. The most familiar
ligatures are ff, fi, and fl. The ffi and ffl used to be standard in
British and American metal type fonts, but they are often
omitted from electronic systems. Some systems dispense with
ligatures altogether, on the assumption that the kerned f and the
dot-less i will make acceptable substitutes. But the conjunction
of the ball of f with the following 1 (fl) is never as clean as in a
properly designed ligature.

Linecasting. The general name for the Linotype and Intertype
mechanical composing system, in which, from the operation of
the keyboard, a line of character matrices is assembled. From
that a line of metal type, called a 'slug', is cast automatically. In
the Ludlow linecaster, which is used chiefly for headlines, the
matrices are composed by hand.

Logotype. A whole name or word made as one piece of type, or
one character, in a font. A directory printer can save time in
composition by having 'Ine' or (in Britain) 'pic' supplied as one
character, available at a single key-stroke.

Matrix. A piece of brass or copper into which a character has
been stamped or engraved and from which type can be cast.

Mechanical composition, as distinct from electronic or photo¬
composition: any system comprising a keyboard and a hot-
metal casting apparatus. In this book the term usually means the

machines made by the Monotype and Linotype companies.

Monotype. The registered trade name of the mechanical system
which produces composed type matter in the form of single
metal types.

Photo-composition. As used in this book it means those typeset¬
ting devices that consist of a lens system, a light source,
a font of characters in the form of a disc or film strip negative,
and a means of selecting a character from it. Traditional
photography provides the basic principle, as distinct from
systems which employ CRT or laser for the transmission of the
characters.

Pixels, from picture e/ements: the 'atoms' into which the digitis¬
ing process converts a character.

Program (not programme). The set of instructions in a computer
which it carries out in sequence. A typesetting program is spec¬
ial, and may have additions to it for the performing of particular
functions, such as page make-up.

Resolution. The definition or resolution of characters produced
by a CRT or laser-equipped typesetting system depends on the
number of lines per inch at which it operates, and at which its
character font was originally scanned. At 300 lpi the resolution
is low, and is only suitable for work on low-grade paper, such as
newsprint. On a firm-surfaced paper the curves and diagonals of
letters at low resolution show the saw-edged effect of the scan
lines or pixels. At high resolution, say 1000 lpi, the contours are
clean. At low resolution the output speed is high; at high reso¬
lution it is much slower. Output resolution has introduced an
extra factor into the concept of quality in printing.

Roman is a term of several meanings. It can mean upright as
distinct from italic. It can mean normal weight as compared
with bold weight. And it can refer to a seriffed face as distinct
from sans-serif. The sense in which 'roman' is to be understood
is usually clear from the context; but it is sometimes necessary to
be explicit and to say, for instance, 'bold roman' if that is what is
intended.

Set. To set type is to compose it into words, lines and pages. But
set has another meaning, when it refers to the width of charac¬
ters. For example, Perpetua is of narrower set than Baskerville.
In traditional Monotype usage the set of a particular size of a
given type face is the width of the em space in American points.
One-eighteenth of that width is the unit of measurement for the
characters in the font.

Small caps, as an additional alphabet useful for expressing a
'difference' in composition, particularly in book work, used to
be standard in regular fonts of metal type and matrices. They
were not simply the capitals reduced in size, but were specially
drawn to a width and weight that would harmonise with the
lowercase and capitals. Makers of CRT typesetting systems