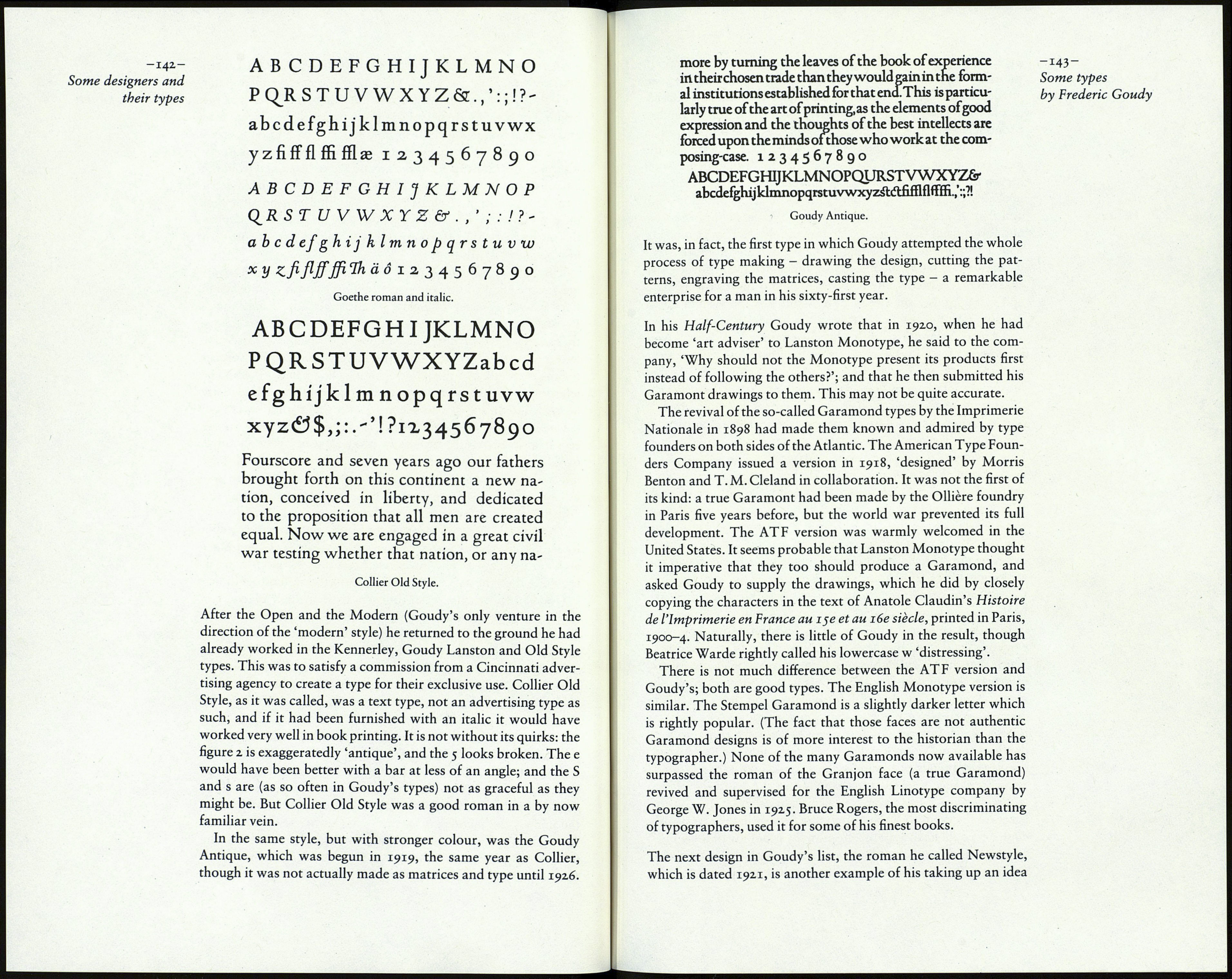 Some designers and J

Fourscore and seven years ago our fathers
brought forth on this continent a new na'
tion, conceived in liberty, and dedicated to
the proposition that all men are created
equal. We are now engaged in a great civil
war testing whether this nation, or any na'

the w and z so wide that they seem to belong to different type
faces. When they occur in text, especially when they are doubled
in words like 'common' and 'dazzle' or they are adjacent to let¬
ters of normal width, the disproportion is obvious and the effect
disagreeable. The nose in a and s is close to the belly, which
produces a clotted effect. The fitting of the type is strangely irre¬
gular; the letters collide or separate in a most erratic way. Taken
together, these defects produce a noticeably uneven texture that
makes the reading of even a short text an uncomfortable
experience. It is allowed that perfect regularity in all respects in a
type design is not an absolute requirement; indeed, it may pro¬
duce a sterilised effect, a lack of vitality. Irregularities in a design
are acceptable if they are an ingredient in its charm, do not affect
its texture, and are unobtrusive. In Goudy Modern the irregular¬
ities of proportion and fitting, however caused, have gone too far.
As already said, the Modern is simply Goudy Open made
solid: hence its weight. Goudy wrote that the starting point for
the Open was the eighteenth-century French engraving repro¬
duced as the frontispiece in A. F. Pollard's Fine Books, which was
published in London in 191г. That tells us how Goudy began the
design, but not why. In 191z the Deberny & Peignot foundry in
Paris issued a type called Cochin. It had considerable success. In

1916 it was reproduced by Lanston Monotype in the United -141-
States where, according to McMurtrie, it was deservedly popular Some types
(he rightly deplored Monotype's diminution of the vivacity of the by Frederic Goudy
original italic). Goudy must have been aware of the Cochin face
and the fact that it was derived from lettering in engravings pro¬
duced in France in the eighteenth century. As we know, Goudy
was an opportunist, alert to the advantage to be gained from the
circumstance of the moment. (This is said to define, not to decry
- to use a phrase of Holbrook Jackson's.) It seems possible that
the popularity of the Cochin type directed his mind and hand to
the nearest example of a French engraving, the frontispiece in
his copy of Pollard's book.

The engraving is from a painting by Hubert Gravelot illustrat¬
ing a scene in an edition of Ovid's Metamorphoses, published in
Paris in 1767. The legend below the picture reads, 'Deucalion et
Pyrrha repeuplant la Terre, suivant l'Oracle de Themis'. Since
there are only four different capitals and seventeen lowercase
letters in that wording, Goudy must have looked to other sources
for the remainder of the letters - or else he invented them. The
lettering in the caption is neat and regular. The a and s are
normal, and the inner spaces of m are only slightly narrower than
those in n (and the same is true of the Cochin type). So the
eccentric letter widths in Goudy Modern seem to be Goudy's
own. A particular feature of the lettering in the engraving is the
unusual proportion of the heights of the capitals and lowercase -
tall ascenders, long descenders and short capitals, characteristics
which Goudy retained in his own design.

The italic of Goudy Modern is quite different from the Cochin
italic; Goudy said it was entirely original. The C, G and S are
awkwardly shaped. The lowercase has a more obviously 'mod¬
ern' look than the roman. It is a little too wide, and rather dull.

Goudy Modern has been much praised in high places; too
much so, to my mind. I prefer the lighter version of it which
Goudy designed in 1932. He called it Goethe, because he pro- See overleaf,
duced it specially for a piece of printing which he contributed to
the Goethe centenary exhibition held in Leipzig in 1932. The face
was also used for the Limited Editions Club edition of Mary
Shelley's Frankenstein (for which Bertha Goudy set the type - all
three hundred pages of it).

The peculiarities of letter width in Goudy Modern are also
present in Goethe; but because of the reduction in weight they are
less noticeable. Its vertical shading and its sober appearance,
which set it apart from Goudy's other book types, are reminis¬
cent of the face made by Binny & Ronaldson in Philadelphia at
the end of the eighteenth century, issued as 'Oxford' by the
American Type Founders Company, and used by Updike for the
text of his great two-volume work on Printing Types: their
History, Form and Use.