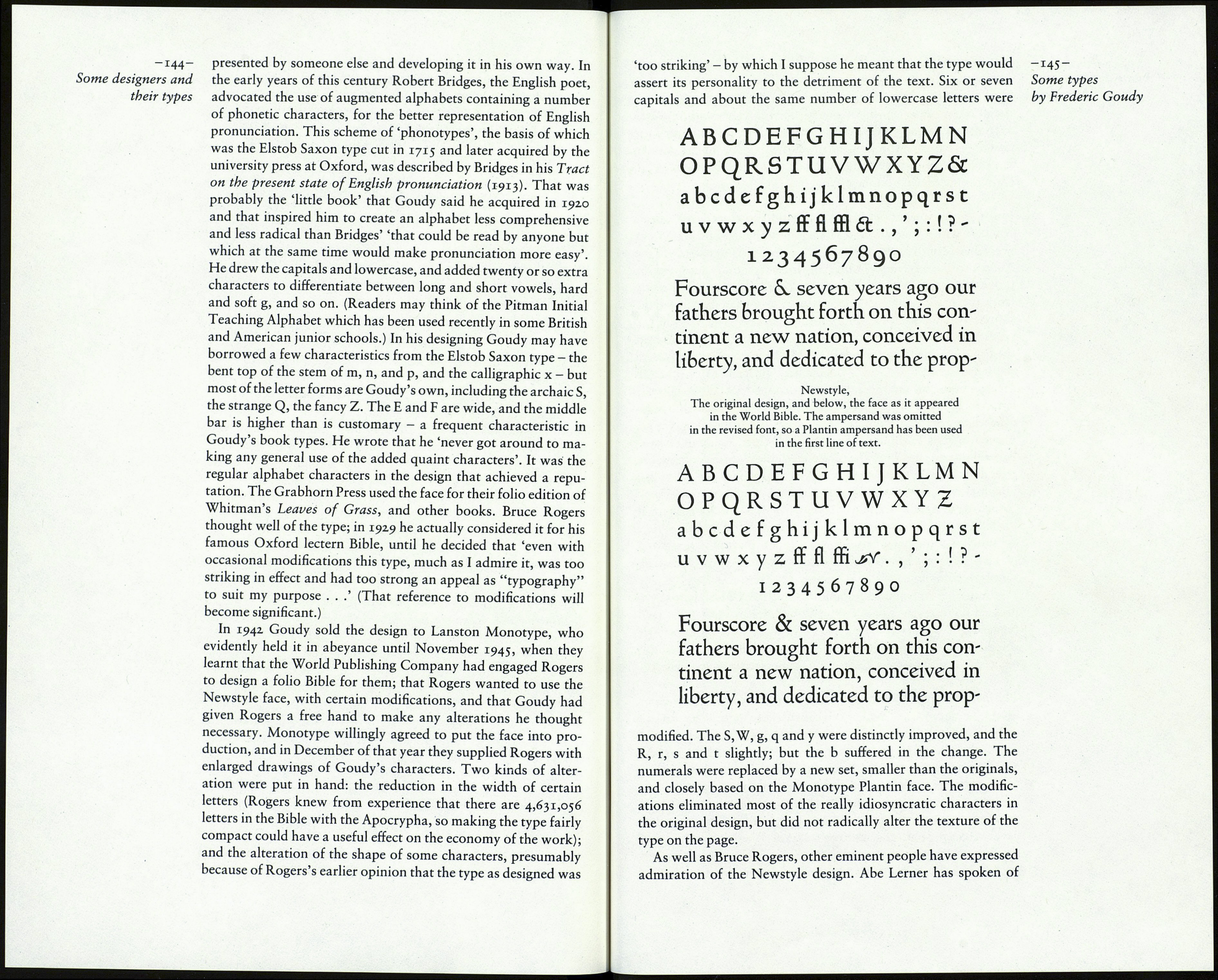 Fourscore and seven years ago our fathers
brought forth on this continent a new na-
tion, conceived in liberty, and dedicated
to the proposition that all men are created
equal. Now we are engaged in a great civil
war testing whether that nation, or any na-

After the Open and the Modern (Goudy's only venture in the
direction of the 'modern' style) he returned to the ground he had
already worked in the Kennerley, Goudy Lanston and Old Style
types. This was to satisfy a commission from a Cincinnati adver¬
tising agency to create a type for their exclusive use. Collier Old
Style, as it was called, was a text type, not an advertising type as
such, and if it had been furnished with an italic it would have
worked very well in book printing. It is not without its quirks: the
figure 2 is exaggeratedly 'antique', and the 5 looks broken. The e
would have been better with a bar at less of an angle; and the S
and s are (as so often in Goudy's types) not as graceful as they
might be. But Collier Old Style was a good roman in a by now
familiar vein.

In the same style, but with stronger colour, was the Goudy
Antique, which was begun in 1919, the same year as Collier,
though it was not actually made as matrices and type until 192.6.

more by turning the leaves of the book of experience
in their chosen trade than they would gain in the form¬
al institutions established for that endThis is particu¬
larly true of the art of printing,as the elements of good
expression and the thoughts of the best intellects are
forced upon the minds ofthose who work at the com¬
posing-case. 1234567890
ABCDEFG^KLMNOPQURSTVWXYZfir
abcdefgHjWrnnopqrstuvAvxyzslcif^flfTffi.,':;?!

It was, in fact, the first type in which Goudy attempted the whole
process of type making - drawing the design, cutting the pat¬
terns, engraving the matrices, casting the type - a remarkable
enterprise for a man in his sixty-first year.

In his Half-Century Goudy wrote that in 1920, when he had
become 'art adviser' to Lanston Monotype, he said to the com¬
pany, 'Why should not the Monotype present its products first
instead of following the others?'; and that he then submitted his
Garamont drawings to them. This may not be quite accurate.

The revival of the so-called Garamond types by the Imprimerie
Nationale in 1898 had made them known and admired by type
founders on both sides of the Atlantic. The American Type Foun¬
ders Company issued a version in 1918, 'designed' by Morris
Benton and T. M. Cleland in collaboration. It was not the first of
its kind: a true Garamont had been made by the Ollière foundry
in Paris five years before, but the world war prevented its full
development. The AT F version was warmly welcomed in the
United States. It seems probable that Lanston Monotype thought
it imperative that they too should produce a Garamond, and
asked Goudy to supply the drawings, which he did by closely
copying the characters in the text of Anatole Claudin's Histoire
de l'Imprimerie en France au 15e et au 16e siècle, printed in Paris,
1900-4. Naturally, there is little of Goudy in the result, though
Beatrice Warde rightly called his lowercase w 'distressing'.

There is not much difference between the AT F version and
Goudy's; both are good types. The English Monotype version is
similar. The Stempel Garamond is a slightly darker letter which
is rightly popular. (The fact that those faces are not authentic
Garamond designs is of more interest to the historian than the
typographer.) None of the many Garamonds now available has
surpassed the roman of the Granjon face (a true Garamond)
revived and supervised for the English Linotype company by
George W. Jones in 1925. Bruce Rogers, the most discriminating
of typographers, used it for some of his finest books.

The next design in Goudy's list, the roman he called Newstyle,
which is dated 1921, is another example of his taking up an idea