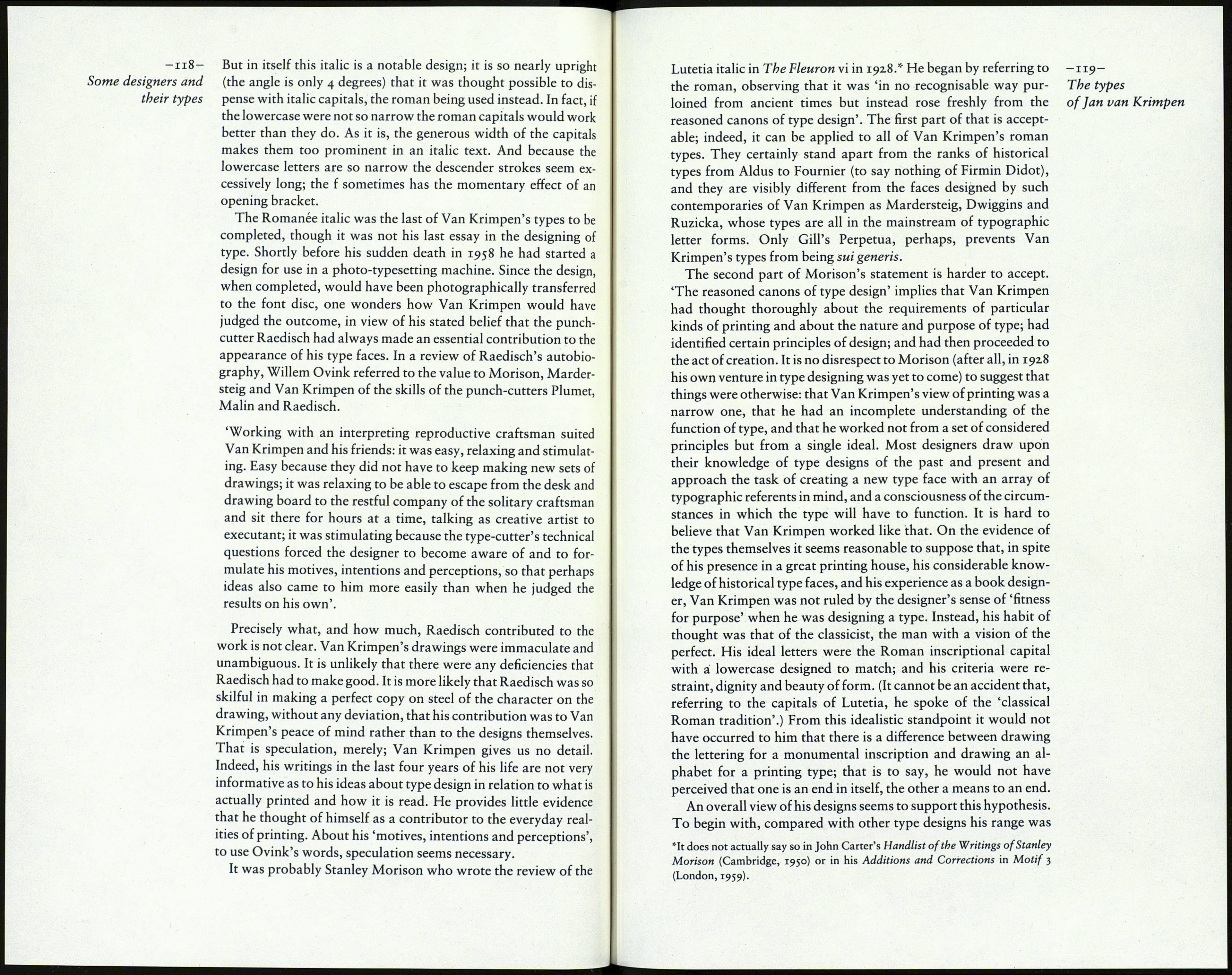 -né- In August i86i-1 wrote another novel for the

volume in length, and was called The Struggles
of Brown, Jones, and Robinson. In this I attempted
a style for which I certainly was not qualified,
and to which I never had again recourse. It was
meant to be funny, was full of slang, and was
intended as a satire on the ways of trade. Still
I think that there is some good fun in it, but I
have heard no one else express such an opinion.

general publishing. But it is not without faults. The f ligatures are
too narrow (the fact that the letters are tied at the top is no reason
for reducing the space between the uprights). That can be toler¬
ated. So can the narrow cross-over W - though it is not so easy to
accept it in the italic. It is the non-lining numerals which are hard
to take-cramped and diminished, looking as though they belong
to a type two sizes smaller. Van Krimpen gave no explanation fot
this curious departure from normal proportion. It was certainly
not an accident: the numerals were included on his original draw¬
ing of the lowercase alphabet. An alternative set of numerals, in
natural scale with the lowercase, is certainly desirable.

The Sheldon design was Van Krimpen's response to a com¬
mission from the University Press at Oxford in 1947 for a type to
be made in 7 point and used for the composition of an octavo
Bible, the text to be in two columns. He decided to make the
lowercase unusually large and to centre it on the body, shorten¬
ing the descenders and ascenders considerably. This, he thought,

CHAPTER 1 have been before me in Jerusalem: yea, my
heart had great experience of wisdom and

THE words of the Preacher, the son of knowledge.
David, king in Jerusalem. 17 And I gave my heart to know wisdom,
2 Vanity of vanities, saith the Preach- and to know madness and folly: I per¬
ei-, vanity of vanities; all is vanity. ceived that this also is vexation of spirit.

3 What profit hath a man of all his labour 18 For in much wisdom is much grief: and
which he taketh under the sun! he that increaseth knowledge increaseth

4 One generation passeth away, and another sorrow.

5 The sun also ariseth, and the sun goeth T SAID in mine heart, Go to now, I will
down, and hasteth to his place where he I prove thee with mirth, therefore enjoy
arose. JL pleasure: and, behold, this also is vanity.

6 The wind goeth toward the south, and 2 I said of laughter, It is mad: and of mirth,
turneth about unto the north; it whirleth What doeth it?

about continually, and the wind returneth 3 I sought in mine heart to give myself un-

again according to his circuits. to wine, yet acquainting mine heart with

7 All the rivers run into the sea; yet the wisdom; and to lay hold on folly, till I
sea is not full; unto the place from whence might see what was that good for the sons
the rivers come, thither they return again, of men, which they should do under the

8 All things are full of labour; man cannot heaven all the days of their life.

utter it: the eye is not satisfied with see- 4 I made me great works; I builded me

ing, nor the ear filled with hearing. houses; I planted me vineyards:

By courtesy of the Univctsity Press, Oxford.

was better than reducing the descenders only. With some per¬
sonal experience of designing types much smaller than 7 point I
can assert with some confidence that Van Krimpen was wrong in
his premise. The channel of white between lines of type is an
indispensible aid to the reader's eye in its traverse across the page
or column. The channel is composed of the space below the letter
m in line 1 and above the m in line 2.. If the lowercase letters are
enlarged too much the reduction of the channel width will be
detrimental to the reading process; and in a fairly narrow column
the space between the lines may even be less than the average
space between the words, still further disturbing the texture of
the setting. Paradoxically, Sheldon would be easier to read if the
lowercase letters were a little smaller.

The unnatural shortness of the ascenders is another reason
why the Sheldon type is less effective than Van Krimpen intended.
Ascenders are more important than descenders to the reader's
comprehension of the text. The letters g, p and q may have their
descenders shortened and yet not be confused with other letters;
j and y with shortened descenders can be prevented from looking
like i and v by careful designing; but the ascender parts of h and 1
are essential to their identity and cannot be reduced without
seriously affecting their natural appearance and that of the words
in which they occur.

for the Romanee roman is not entirely satisfactory in that role. As

he wrote himself: 'I am afraid that, despite the fact that the roman

and italic are undeniably by the same hand, the distance of

twenty years between the coming into existence of the one and

the other in a way tells.' (His English is awkward but the meaning

is clear enough.) Once again the contrast in colour and texture

between the generous roman and the narrow italic is too great.