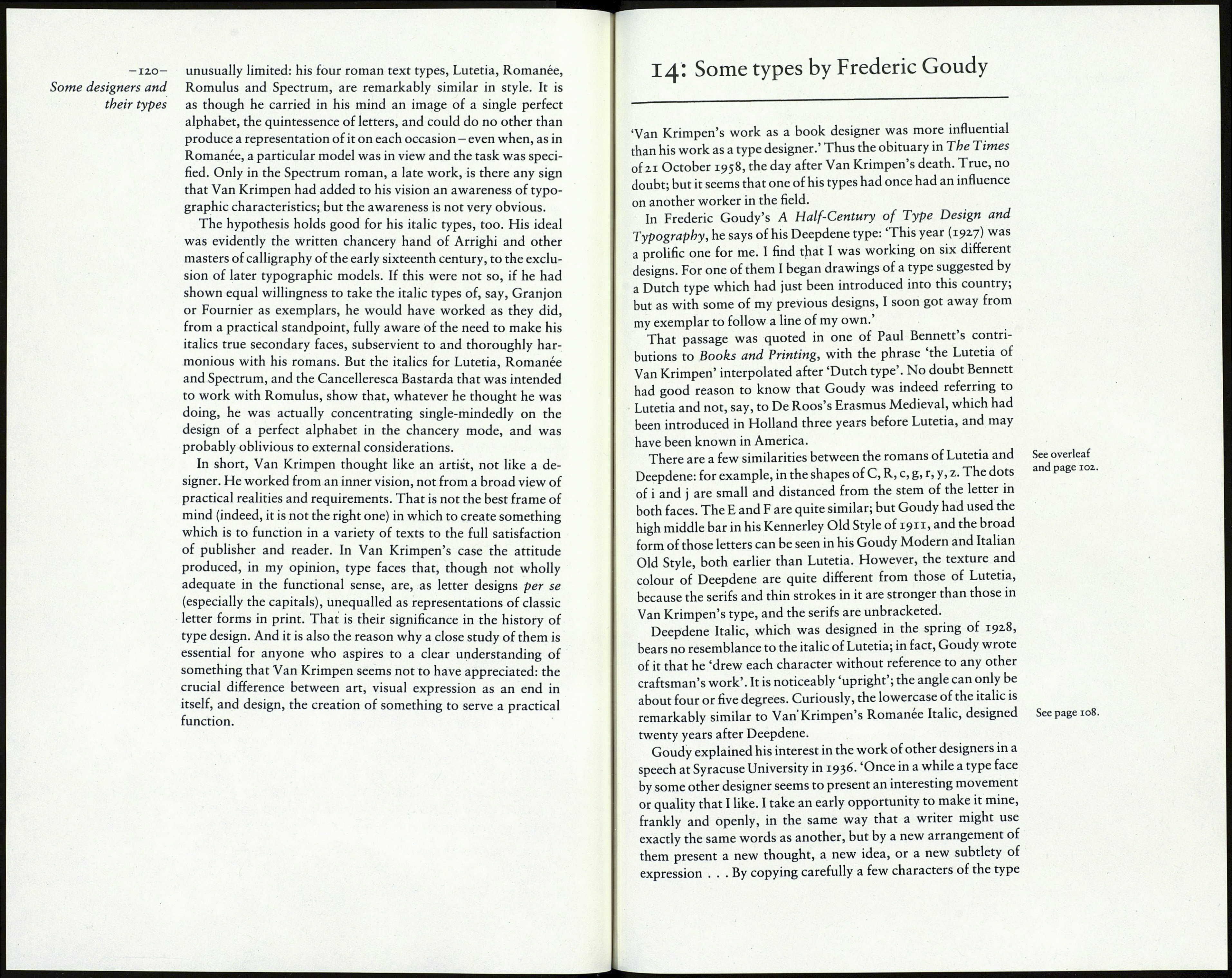 But in itself this italic is a notable design; it is so nearly upright
(the angle is only 4 degrees) that it was thought possible to dis¬
pense with italic capitals, the roman being used instead. In fact, if
the lowercase were not so narrow the roman capitals would work
better than they do. As it is, the generous width of the capitals
makes them too prominent in an italic text. And because the
lowercase letters are so narrow the descender strokes seem ex¬
cessively long; the f sometimes has the momentary effect of an
opening bracket.

The Romanee italic was the last of Van Krimpen's types to be
completed, though it was not his last essay in the designing of
type. Shortly before his sudden death in 1958 he had started a
design for use in a photo-typesetting machine. Since the design,
when completed, would have been photographically transferred
to the font disc, one wonders how Van Krimpen would have
judged the outcome, in view of his stated belief that the punch-
cutter Raedisch had always made an essential contribution to the
appearance of his type faces. In a review of Raedisch's autobio¬
graphy, Willem Ovink referred to the value to Morison, Marder¬
steig and Van Krimpen of the skills of the punch-cutters Plumet,
Malin and Raedisch.

'Working with an interpreting reproductive craftsman suited
Van Krimpen and his friends: it was easy, relaxing and stimulat¬
ing. Easy because they did not have to keep making new sets of
drawings; it was relaxing to be able to escape from the desk and
drawing board to the restful company of the solitary craftsman
and sit there for hours at a time, talking as creative artist to
executant; it was stimulating because the type-cutter's technical
questions forced the designer to become aware of and to for¬
mulate his motives, intentions and perceptions, so that perhaps
ideas also came to him more easily than when he judged the
results on his own'.

Precisely what, and how much, Raedisch contributed to the
work is not clear. Van Krimpen's drawings were immaculate and
unambiguous. It is unlikely that there were any deficiencies that
Raedisch had to make good. It is more likely that Raedisch was so
skilful in making a perfect copy on steel of the character on the
drawing, without any deviation, that his contribution was to Van
Krimpen's peace of mind rather than to the designs themselves.
That is speculation, merely; Van Krimpen gives us no detail.
Indeed, his writings in the last four years of his life are not very
informative as to his ideas about type design in relation to what is
actually printed and how it is read. He provides little evidence
that he thought of himself as a contributor to the everyday real¬
ities of printing. About his 'motives, intentions and perceptions',
to use Ovink's words, speculation seems necessary.

It was probably Stanley Morison who wrote the review of the

Lutetia italic in The Fleuron vi in 1928. * He began by referring to -119-
the roman, observing that it was 'in no recognisable way pur- The types
loined from ancient times but instead rose freshly from the of Jan van Krimpen
reasoned canons of type design'. The first part of that is accept¬
able; indeed, it can be applied to all of Van Krimpen's roman
types. They certainly stand apart from the ranks of historical
types from Aldus to Fournier (to say nothing of Firmin Didot),
and they are visibly different from the faces designed by such
contemporaries of Van Krimpen as Mardersteig, Dwiggins and
Ruzicka, whose types are all in the mainstream of typographic
letter forms. Only Gill's Perpetua, perhaps, prevents Van
Krimpen's types from being sui generis.

The second part of Morison's statement is harder to accept.
'The reasoned canons of type design' implies that Van Krimpen
had thought thoroughly about the requirements of particular
kinds of printing and about the nature and purpose of type; had
identified certain principles of design; and had then proceeded to
the act of creation. It is no disrespect to Morison (after all, in 1928
his own venture in type designing was yet to come) to suggest that
things were otherwise: that Van Krimpen's view of printing was a
narrow one, that he had an incomplete understanding of the
function of type, and that he worked not from a set of considered
principles but from a single ideal. Most designers draw upon
their knowledge of type designs of the past and present and
approach the task of creating a new type face with an array of
typographic referents in mind, and a consciousness of the circum¬
stances in which the type will have to function. It is hard to
believe that Van Krimpen worked like that. On the evidence of
the types themselves it seems reasonable to suppose that, in spite
of his presence in a great printing house, his considerable know¬
ledge of historical type faces, and his experience as a book design¬
er, Van Krimpen was not ruled by the designer's sense of 'fitness
for purpose' when he was designing a type. Instead, his habit of
thought was that of the classicist, the man with a vision of the
perfect. His ideal letters were the Roman inscriptional capital
with à lowercase designed to match; and his criteria were re¬
straint, dignity and beauty of form. (It cannot be an accident that,
referring to the capitals of Lutetia, he spoke of the 'classical
Roman tradition'.) From this idealistic standpoint it would not
have occurred to him that there is a difference between drawing
the lettering for a monumental inscription and drawing an al¬
phabet for a printing type; that is to say, he would not have
perceived that one is an end in itself, the other a means to an end.

An overall view of his designs seems to support this hypothesis.
To begin with, compared with other type designs his range was

*It does not actually say so in John Carter's Handlist of the Writings of Stanley
Morison (Cambridge, 1950) or in his Additions and Corrections in Motif 3
(London, 1959).