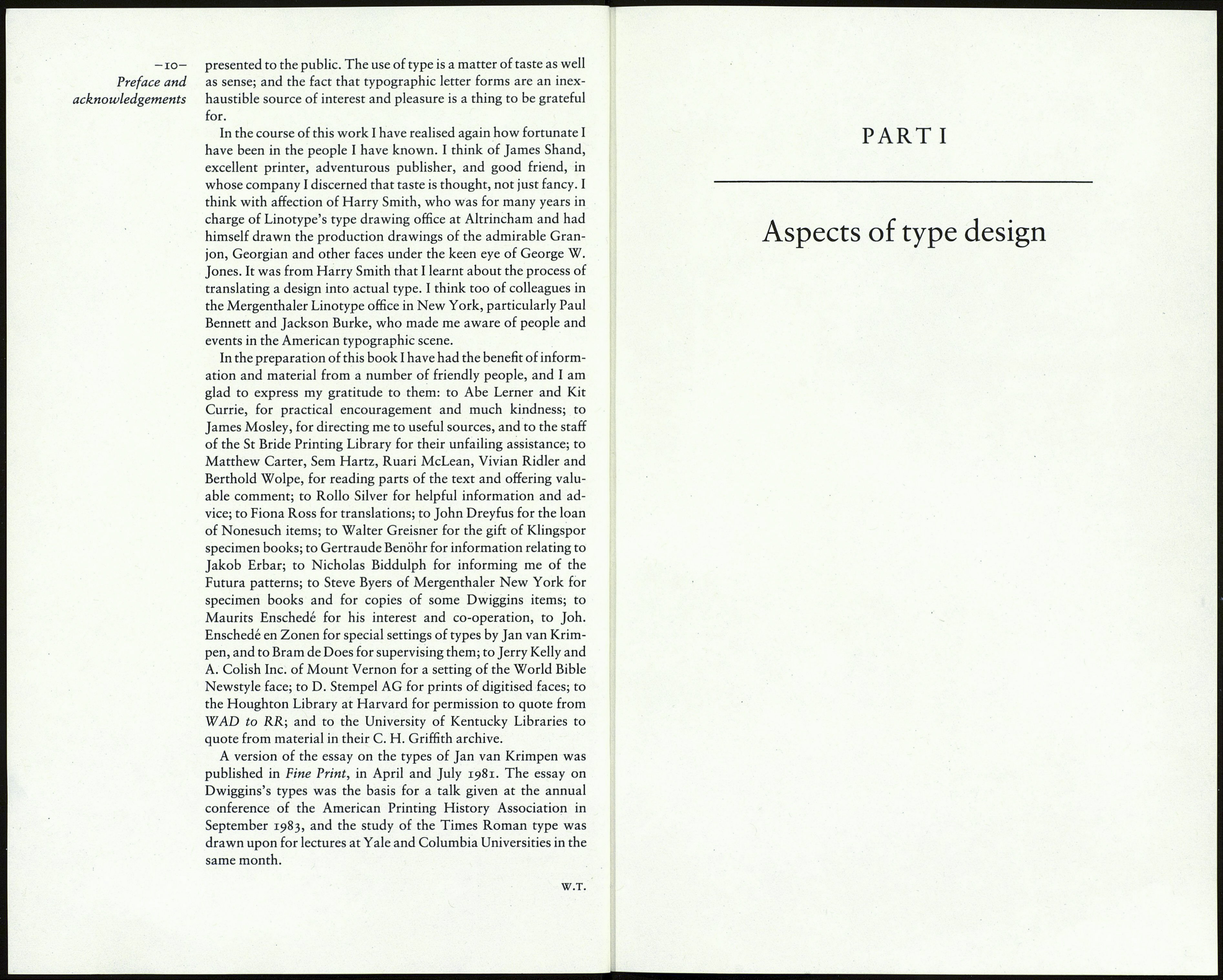 In my apprentice days, when I aspired to be a typographer and
was learning about type faces, I realised after a time that the
accumulation of facts about them, squirrel-fashion, was not
enough. It was necessary to acquire a sense of values and to
develop the ability to make judgements about the quality of the
type faces I was using. I was therefore grateful to Updike,
Morison, Johnson and others who, in their writings, not only
explained the history of type designs but expressed opinions
about them. If I sometimes found it difficult to accept a particular
comment I was at least pleased that the writer had made me think
about the matter. Now, after more than fifty years of involve¬
ment with type, it has occurred to me that, without trying to
emulate the scholarship of the writers I have mentioned, I should
set down a few thoughts of my own, in the hope that they may be
useful to a reader who is fairly new to the subject, has an interest
in type and perhaps some acquaintance with it, thinks (as I do)
that it is more important to be able to judge the quality of designs
than to have an encyclopedic knowledge of them, but does not
yet feel sufficiently equipped to make a confident assessment of
the merits of a type. I have supposed that he or she may be
bewildered by the number and variety of type faces now current,
suspicious of the high-powered promotion of some of them, and
disappointed that the journals that deal with typography do not
provide the same sort of critical analysis of type designs as is
given to new literature and the performing arts in the general
press. So I have chosen to describe some aspects of the nature of
type that have a bearing on the design of it, and then to offer a
personal appraisal of the work of four twentieth-century desig¬
ners, to which I have added a view of Stanley Morison's single,
but very significant, venture in the field.

The pages that follow, then, are a compound of fact and
opinion. I am sure the reader will have no difficulty in recog¬
nising one from the other, and would not wish me to say 'in my
opinion' every time I have a comment to make. At the same time,
I hope the reader will keep it in mind that an opinion is not an
absolute truth, a gospel from on high. To quote from John
Rothenstein's Modern English Painters: '. . . there exists no such
quality as perfect detachment. All writers worth reading have an
attitude towards their subject ... If the reader knows where a
writer stands, he will be able to make the necessary allowance for
his bias.' For my own part, I take the view that typography, like
most other sorts of designing, is essentially a means to an end;
and the end is not the self-satisfaction of the designer but the
contribution he or she makes to the effectiveness of whatever is