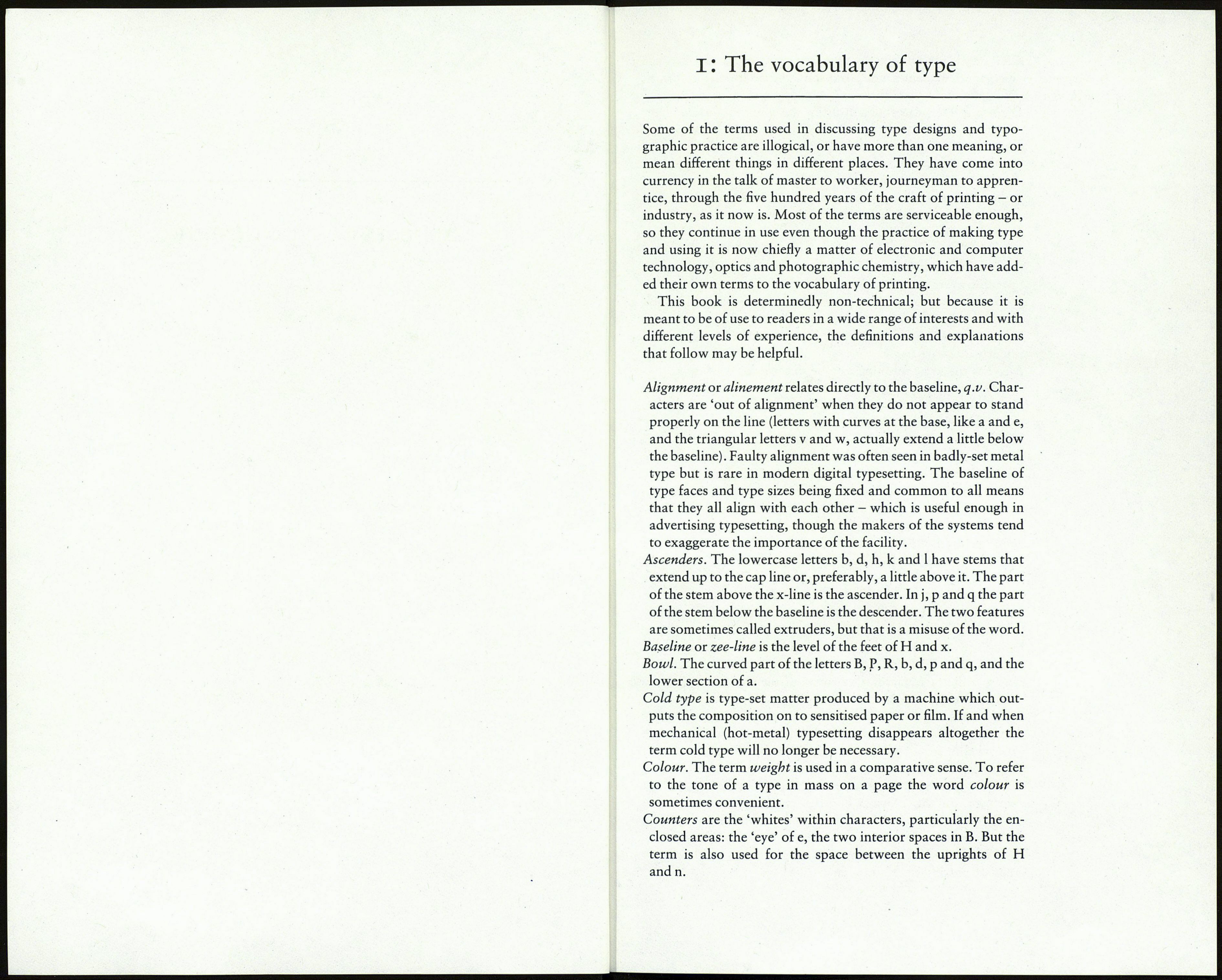 - ю- presented to the public. The use of type is a matter of taste as well
Preface and as sense; and the fact that typographic letter forms are an inex-
acknowledgements haustible source of interest and pleasure is a thing to be grateful
for.

In the course of this work I have realised again how fortunate I
have been in the people I have known. I think of James Shand,
excellent printer, adventurous publisher, and good friend, in
whose company I discerned that taste is thought, not just fancy. I
think with affection of Harry Smith, who was for many years in
charge of Linotype's type drawing office at Altrincham and had
himself drawn the production drawings of the admirable Gran-
jon, Georgian and other faces under the keen eye of George W.
Jones. It was from Harry Smith that I learnt about the process of
translating a design into actual type. I think too of colleagues in
the Mergenthaler Linotype office in New York, particularly Paul
Bennett and Jackson Burke, who made me aware of people and
events in the American typographic scene.

In the preparation of this book I have had the benefit of inform¬
ation and material from a number of friendly people, and I am
glad to express my gratitude to them: to Abe Lerner and Kit
Currie, for practical encouragement and much kindness; to
James Mosley, for directing me to useful sources, and to the staff
of the St Bride Printing Library for their unfailing assistance; to
Matthew Carter, Sem Hartz, Ruari McLean, Vivian Ridler and
Berthold Wolpe, for reading parts of the text and offering valu¬
able comment; to Rollo Silver for helpful information and ad¬
vice; to Fiona Ross for translations; to John Dreyfus for the loan
of Nonesuch items; to Walter Greisner for the gift of Klingspor
specimen books; to Gertraude Benöhr for information relating to
Jakob Erbar; to Nicholas Biddulph for informing me of the
Futura patterns; to Steve Byers of Mergenthaler New York for
specimen books and for copies of some Dwiggins items; to
Maurits Enschedé for his interest and co-operation, to Joh.
Enschedé en Zonen for special settings of types by Jan van Krim¬
pen, and to Bram de Does for supervising them; to Jerry Kelly and
A. Colish Inc. of Mount Vernon for a setting of the World Bible
Newstyle face; to D. Stempel AG for prints of digitised faces; to
the Houghton Library at Harvard for permission to quote from
WAD to RR; and to the University of Kentucky Libraries to
quote from material in their C. H. Griffith archive.

A version of the essay on the types of Jan van Krimpen was
published in Fine Print, in April and July 1981. The essay on
Dwiggins's types was the basis for a talk given at the annual
conference of the American Printing History Association in
September 1983, and the study of the Times Roman type was
drawn upon for lectures at Yale and Columbia Universities in the
same month.