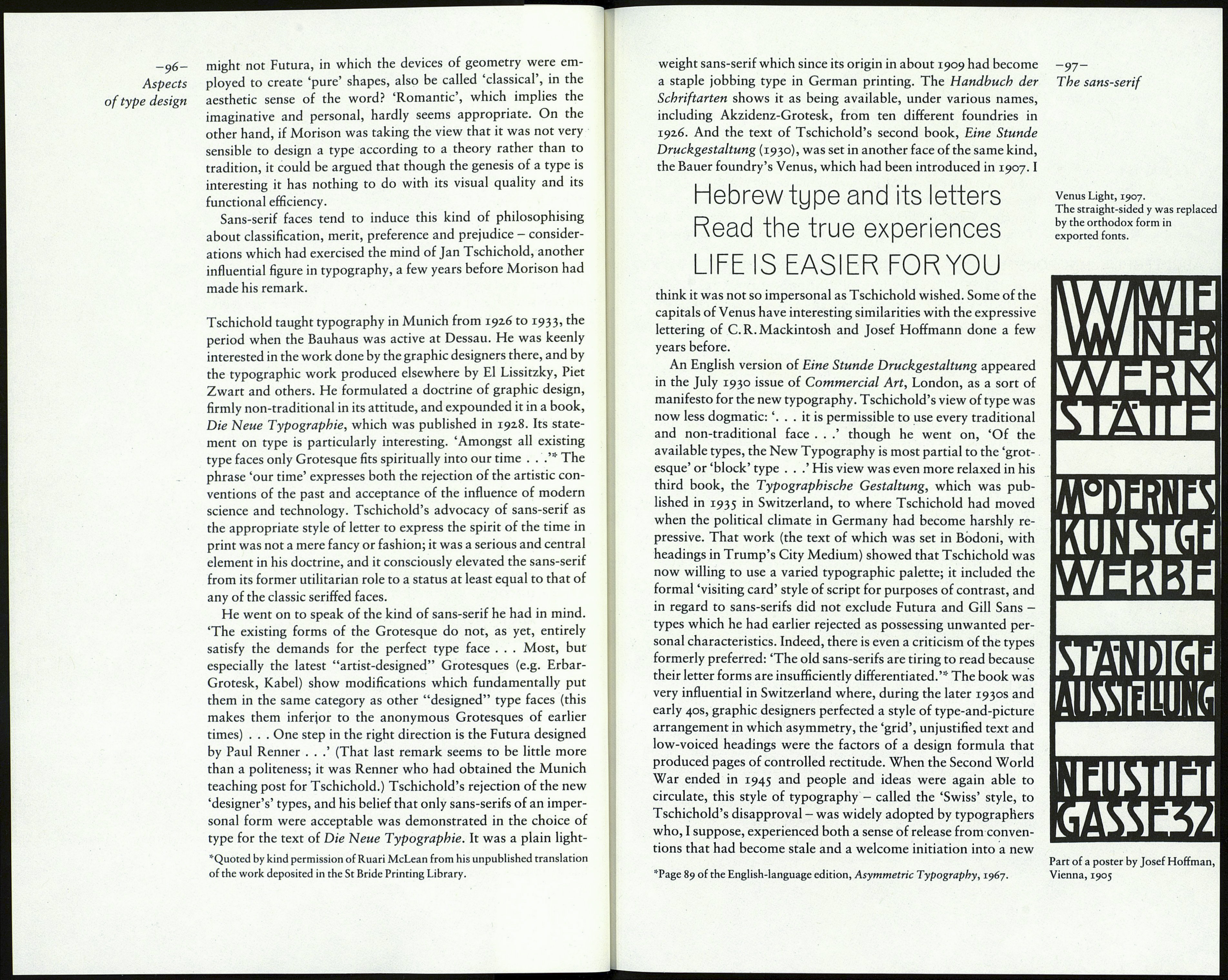 If this form had been issued

Futura: experimental forms from pattern plates made for matrix engraving

First versions of Futura light and bold, before the design settled down.

fact, Futura is just as sensitive a design as Gill Sans; it is simply -95 _

that it does not refer to models of the past for such letters as G, R, The sans-serif

The Erbar and Futura designs were imitated by the other
German foundries very quickly, but those two faces, with Kabel,
were the ones that were exported and became well known.
Futura was for many years the most popular sans-serif type in the
United States because it was available for mechanical compo¬
sition from Intertype under its own name and from Linotype
under the name Spartan. In Britain during the 1930s both types
were popular with advertising agency typographers, though they
lost favour as Gill Sans gained it.

By about 1940, then, the sans-serif types considered to be usable
for text setting consisted of two species. One of them was repre¬
sented by Gill Sans; solely represented, actually, because it seems
to have been inimitable. It was much admired in Britain, partly
because of the interesting people involved in its creation: Eric Gill
himself; Stanley Morison, the most distinguished figure in British
typography, who had instigated the design; and Beatrice Warde,
who publicised the type (and the people) so skilfully. It may be,
too, that the traditionalist strain in the British character respon¬
ded to the type's air of academic probity and did not object to the
slightly mannered effect it presented in text composition. Gill
Sans meant nothing to American typographers, and very little to
European ones - a state of affairs which Monotype tried to rem¬
edy by producing an alternative version of four of its capitals,
nine lowercase letters and seven numerals (but not an alternative
name) to enable the type to be converted into a close imitation of

Futura, which was the chief representative of the other species of
sans-serif then current. Just where one's preference lay depended
on where one stood. Stanley Morison had expressed his view in a
curious way. In a letter to Robert Blake in May 1936 he had
described Futura and Kabel as 'romantic', in contrast to the
'common-sense' quality of, and absence of 'trickiness' in, Gill
Sans. If he meant 'romantic' as the opposite of 'classical', can the
term really be applied to Futura? Gill Sans certainly reflects some
characteristics of letter forms of the past, and to that extent it
has a classical aspect, in the associative sense of the word. But