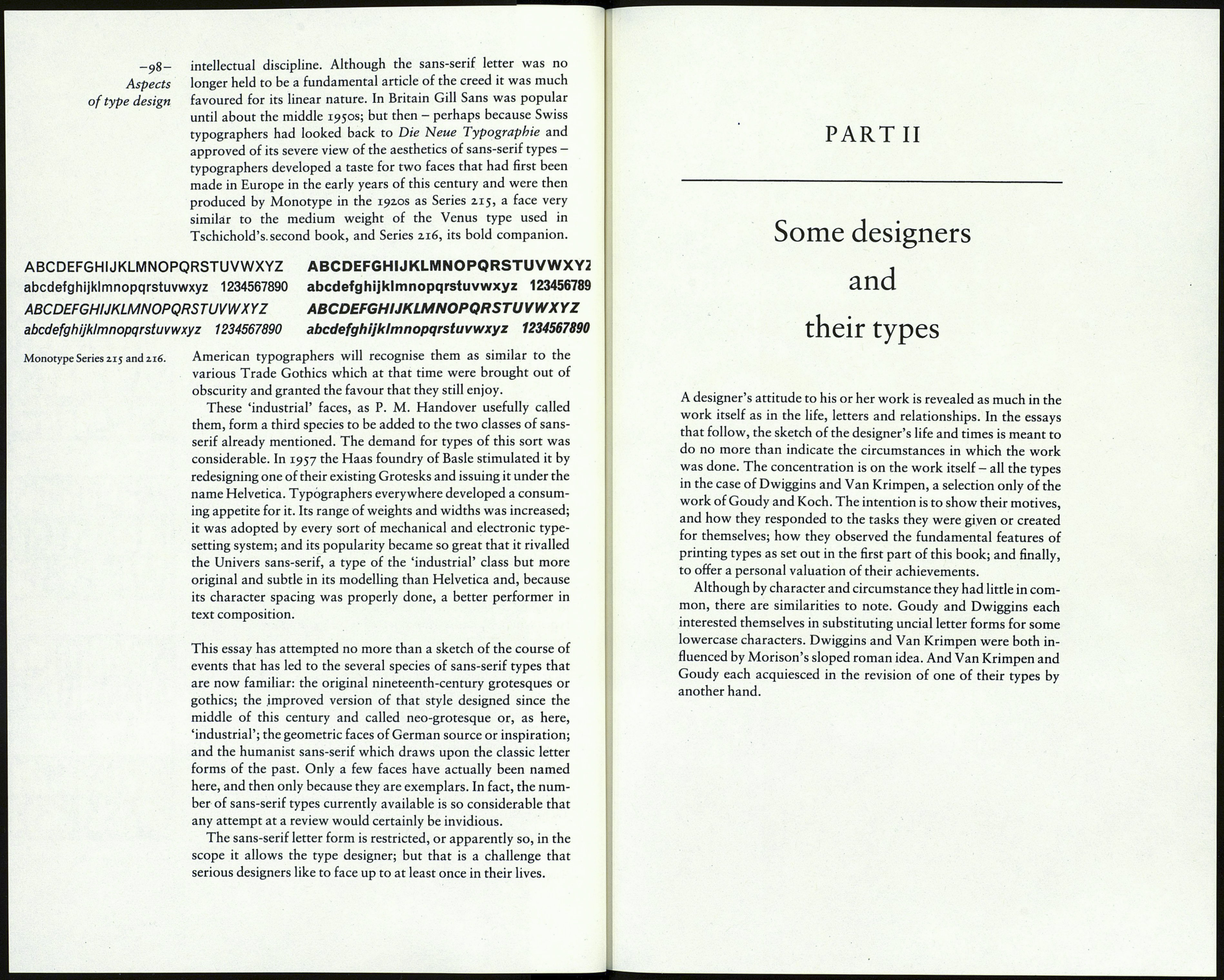 -96- might not Futura, in which the devices of geometry were em-
Aspects ployed to create 'pure' shapes, also be called 'classical', in the
of type design aesthetic sense of the word? 'Romantic', which implies the
imaginative and personal, hardly seems appropriate. On the
other hand, if Morison was taking the view that it was not very
sensible to design a type according to a theory rather than to
tradition, it could be argued that though the genesis of a type is
interesting it has nothing to do with its visual quality and its
functional efficiency.

Sans-serif faces tend to induce this kind of philosophising
about classification, merit, preference and prejudice - consider¬
ations which had exercised the mind of Jan Tschichold, another
influential figure in typography, a few years before Morison had
made his remark.

Tschichold taught typography in Munich from 1926 to 1933, the
period when the Bauhaus was active at Dessau. He was keenly
interested in the work done by the graphic designers there, and by
the typographic work produced elsewhere by El Lissitzky, Piet
Zwart and others. He formulated a doctrine of graphic design,
firmly non-traditional in its attitude, and expounded it in a book,
Die Neue Typographie, which was published in 1928. Its state¬
ment on type is particularly interesting. 'Amongst all existing
type faces only Grotesque fits spiritually into our time . . .*• The
phrase 'our time' expresses both the rejection of the artistic con¬
ventions of the past and acceptance of the influence of modern
science and technology. Tschichold's advocacy of sans-serif as
the appropriate style of letter to express the spirit of the time in
print was not a mere fancy or fashion; it was a serious and central
element in his doctrine, and it consciously elevated the sans-serif
from its former utilitarian role to a status at least equal to that of
any of the classic seriffed faces.

He went on to speak of the kind of sans-serif he had in mind.
'The existing forms of the Grotesque do not, as yet, entirely
satisfy the demands for the perfect type face . . . Most, but
especially the latest "artist-designed" Grotesques (e.g. Erbar-
Grotesk, Kabel) show modifications which fundamentally put
them in the same category as other "designed" type faces (this
makes them inferjor to the anonymous Grotesques of earlier
times) . . . One step in the right direction is the Futura designed
by Paul Renner . . .' (That last remark seems to be little more
than a politeness; it was Renner who had obtained the Munich
teaching post for Tschichold.) Tschichold's rejection of the new
'designer's' types, and his belief that only sans-serifs of an imper¬
sonal form were acceptable was demonstrated in the choice of
type for the text of Die Neue Typographie. It was a plain light-

*Quoted by kind permission of Ruari McLean from his unpublished translation
of the work deposited in the St Bride Printing Library.

weight sans-serif which since its origin in about 1909 had become
a staple jobbing type in German printing. The Handbuch der
Schriftarten shows it as being available, under various names,
including Akzidenz-Grotesk, from ten different foundries in
1926. And the text of Tschichold's second book, Eine Stunde
Druckgestaltung (1930), was set in another face of the same kind,
the Bauer foundry's Venus, which had been introduced in 1907.1

Hebrew type and its letters
Read the true experiences

think it was not so impersonal as Tschichold wished. Some of the
capitals of Venus have interesting similarities with the expressive
lettering of C.R. Mackintosh and Josef Hoffmann done a few
years before.

An English version of Eine Stunde Druckgestaltung appeared
in the July 1930 issue of Commercial Art, London, as a sort of
manifesto for the new typography. Tschichold's view of type was
now less dogmatic: '. . . it is permissible to use every traditional
and non-traditional face . . .' though he went on, 'Of the
available types, the New Typography is most partial to the 'grot-.
esque' or 'block' type . . .' His view was even more relaxed in his
third book, the Typographische Gestaltung, which was pub¬
lished in 1935 in Switzerland, to where Tschichold had moved
when the political climate in Germany had become harshly re¬
pressive. That work (the text of which was set in Bodoni, with
headings in Trump's City Medium) showed that Tschichold was
now willing to use a varied typographic palette; it included the
formal 'visiting card' style of script for purposes of contrast, and
in regard to sans-serifs did not exclude Futura and Gill Sans -
types which he had earlier rejected as possessing unwanted per¬
sonal characteristics. Indeed, there is even a criticism of the types
formerly preferred: 'The old sans-serifs are tiring to read because
their letter forms are insufficiently differentiated.'* The book was
very influential in Switzerland where, during the later 1930s and
early 40S, graphic designers perfected a style of type-and-picture
arrangement in which asymmetry, the 'grid', unjustified text and
low-voiced headings were the factors of a design formula that
produced pages of controlled rectitude. When the Second World
War ended in 1945 and people and ideas were again able to
circulate, this style of typography - called the 'Swiss' style, to
Tschichold's disapproval - was widely adopted by typographers
who, I suppose, experienced both a sense of release from conven¬
tions that had become stale and a welcome initiation into a new

Venus Light, 1907.
The straight-sided у was replaced
by the orthodox form in
exported fonts.

Part of a poster by Josef Hoffman,
Vienna, 1905