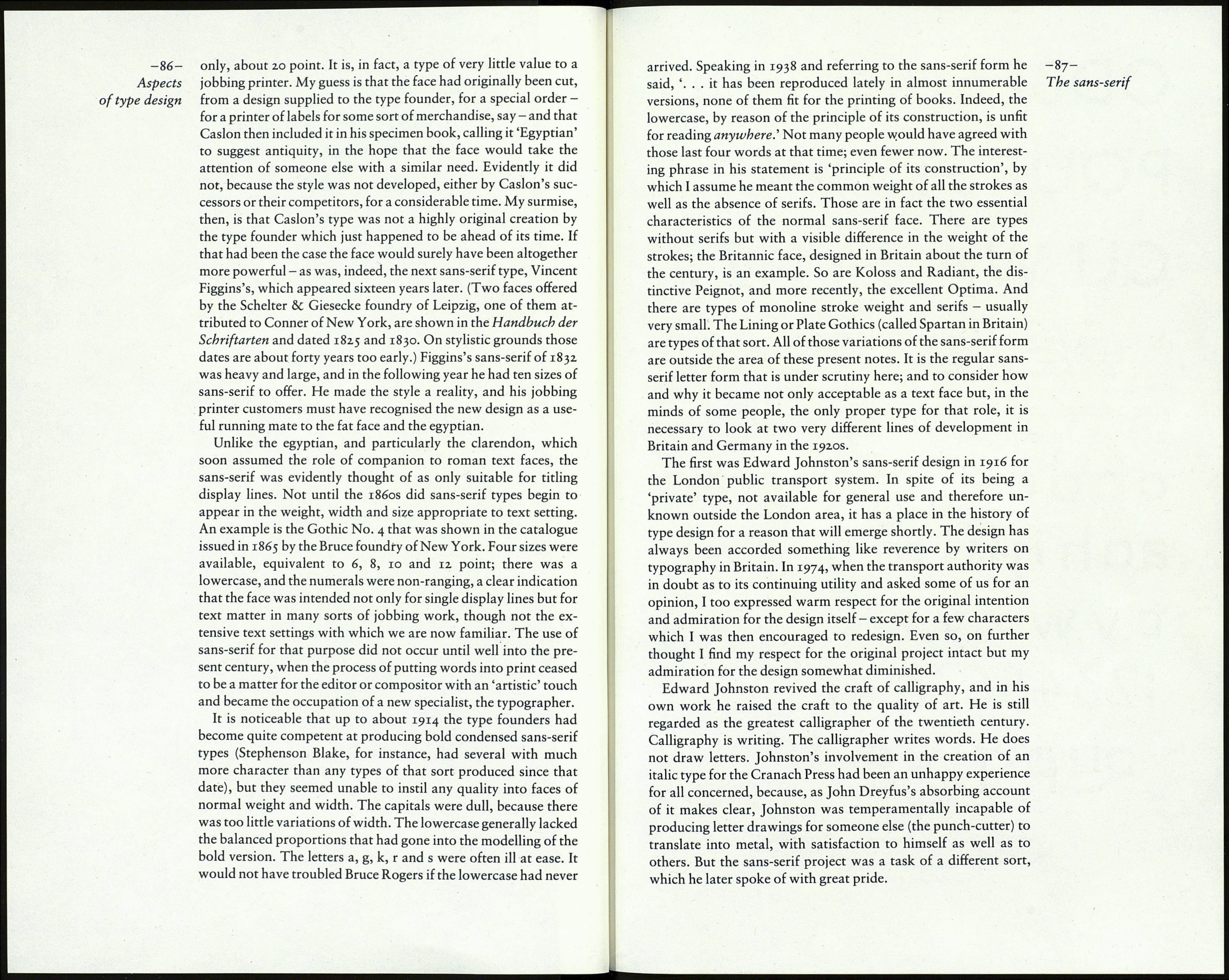 -84- thick, or it would have been a stub, not a slab; and that deter-
Aspects mined the space at the left side of the letter. The stem of the letter
of type design had no foot serif. The result of those two features was often a
noticeable gap when b followed other letters, especially a, with
its upturned terminal. In fact, uneven fitting was a frequent defect
in the old egyptians. The lowercase к sometimes looked too
heavy, because of the number of strong serifs. And there were
other characters, g and s for instance, that often looked unshape¬
ly. The new egyptians of the 1930s avoided these defects because
their designers were not influenced by letter forms of another
class. On the other hand, the German and American designers
were trammelled by the compass and set square. If in the older
types some of the letters have a 'blacksmithed' awkwardness, at
least they seem to have come from a human hand. The faces of
the 1930s suggest the product of a formula and a machine.
George Trump's Schadow type (which is only just an egyptian) is
an exception, in having a good deal of subtlety in its shapes and
edges: and more recently some designers in Europe have suc¬
ceeded in producing egyptians which retain the 'monoline'
armature of the letter form and its rectangular serifs while avoid¬
ing the mechanical appearance of the types of the 1930s.

When an egyptian is used for text matter the evenness of its
strokes and its prominent square serifs produce a canvas-like
texture which in a long text soon becomes tiring, with the possi¬
bility that the reader's comprehension may suffer. Its readability
is not high. On my personal readability scale of one to ten the
egyptian rates about five. But in short passages, as in a catalogue
or travel brochure, it can be effective; and when it is necessary to
superimpose text matter on a tint or reverse it from black to
white, it is actually more effective than a traditional text type. In
fact, there are times when the unsubtle sober quality of the egypt¬
ian is more serviceable than the elegance of types of greater
reputation.

As an identifying term 'egyptian' expressed an idea - the noble
past - rather than a species. It was even applied to the first sans-
serif type, though 'antique' was more favoured, until that was
displaced in Britain by 'grotesque', with 'gothic' and 'doric' as
alternatives. There was no good reason for any of those names,
but they continued in use until the beginning of this century,
when it became customary to give a specific name to a new type
rather than a number. The French adopted 'antique' as the

generic name for sans-serif faces. The Germans called them -85-
'Grotesk'. American founders settled on 'gothic' - a misleading The sans-serif
term, as De Vinne said, which is otherwise given to black-letter
types. To refer to these terms in the past tense is not really cor¬
rect. A catalogue of digital type faces current in 1985 showed that
this fine confusion of terms is still with us. It includes Antique
No. 3, an egyptian, and Antique Olive, a sans-serif; Doric Bold
and Doric Black, also sans-serifs; numerous Gothics, from
Copperplate to Franklin; but nothing actually called 'sans-serif.
Gill Sans is the nearest - though on the original Monotype speci¬
men sheets it was properly called 'Gill Sans-serif. The term sans-
serif, coined by Vincent Figgins in 1832, is at least accurate, even
though it expresses a negative characteristic. 'Lineal', recently
recommended in Britain, is a little more descriptive, but it has not
become popular.

'The sans-serif is in fact an egyptian with the serifs knocked
off, and it is probable that that was the manner of its creation.' It
is to be hoped that that uncharacteristic flight of fancy by
A.F.Johnson has not misled anyone. P.M.Handover's explan¬
ation is equally untenable. Her contention that Figgins empha¬
sised the serifs of the fat face and thereby produced the egyptian,
while William Caslon IV eliminated the serif of the fat face to
create the sans-serif, shows a curious disregard of the structure of
the three kinds of design. In fact, the sans-serif letter was in use in
other fields long before the type founders began to produce it.
Nicolete Gray has described its presence on fifteenth-century in¬
scriptions in Florence. James Mosley has written of the architects
and sculptors who, at the end of the eighteenth century, used the
letter for its classical associations (it is significant that a number
of the nineteenth-century German sans-serif types were called
'Steinschrift'). Mosley quotes James Callingham's assertion in
Sign Writing and Glass Embossing (1871) that 'the credit of
having introduced the ordinary square or San-seriff letters . . .
belongs to the sign-writer, by whom they were employed . . .
before the type founder gave them his attention . . .' It seems
possible, though I have not seen it suggested, that it was the
makers of large-size wooden type who first imitated the sign-
painters' 'block' letter and supplied it to the printers of posters as
a strong alternative to the fat face and the egyptian. If that were
so, one could assume that as soon as the new letter appeared in
print it may well have caught the eye of an enterprising type
founder; in particular, one who had a commercial interest in the
supply of large sizes of metal type. William Caslon IV, for in¬
stance. In 1810 he had successfully developed a special kind of
matrix for the production of large type. As it is, though, the first
sans-serif type we know, the one that appeared in his specimen
book of 1816, is a puzzling thing; a single line of capitals, fairly
broad in shape, no more than medium weight, and in one size