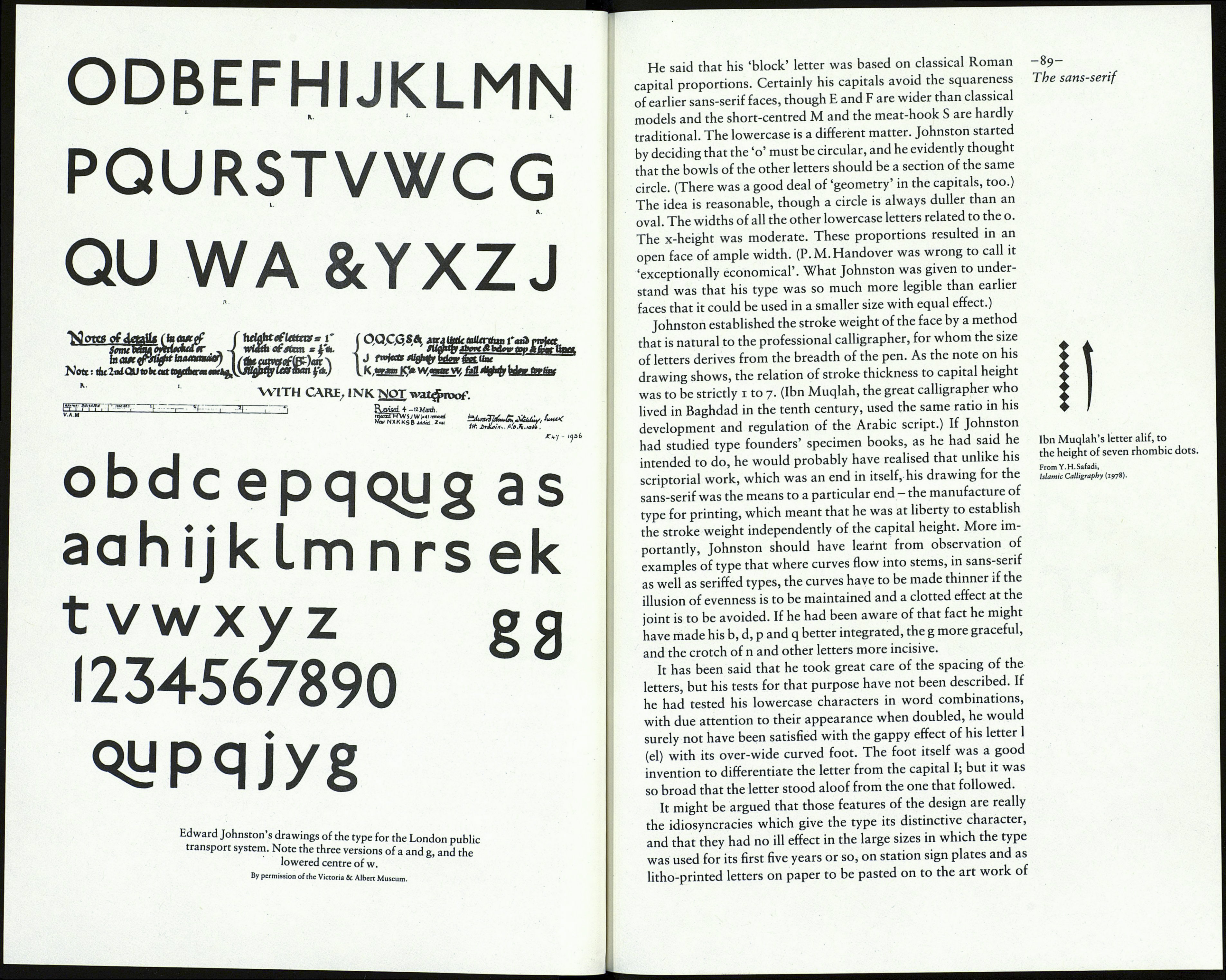 -86- only, about 20 point. It is, in fact, a type of very little value to a
Aspects jobbing printer. My guess is that the face had originally been cut,
of type design from a design supplied to the type founder, for a special order -
for a printer of labels for some sort of merchandise, say - and that
Caslon then included it in his specimen book, calling it 'Egyptian'
to suggest antiquity, in the hope that the face would take the
attention of someone else with a similar need. Evidently it did
not, because the style was not developed, either by Caslon's suc¬
cessors or their competitors, for a considerable time. My surmise,
then, is that Caslon's type was not a highly original creation by
the type founder which just happened to be ahead of its time. If
that had been the case the face would surely have been altogether
more powerful - as was, indeed, the next sans-serif type, Vincent
Figgins's, which appeared sixteen years later. (Two faces offered
by the Schelter OC Giesecke foundry of Leipzig, one of them at¬
tributed to Conner of New York, are shown in the Handbuch der
Schriftarten and dated 1825 and 1830. On stylistic grounds those
dates are about forty years too early.) Figgins's sans-serif of 1832
was heavy and large, and in the following year he had ten sizes of
sans-serif to offer. He made the style a reality, and his jobbing
printer customers must have recognised the new design as a use¬
ful running mate to the fat face and the egyptian.

Unlike the egyptian, and particularly the clarendon, which
soon assumed the role of companion to roman text faces, the
sans-serif was evidently thought of as only suitable for titling
display lines. Not until the i86"os did sans-serif types begin to
appear in the weight, width and size appropriate to text setting.
An example is the Gothic No. 4 that was shown in the catalogue
issued in 1865 by the Bruce foundry of New York. Four sizes were
available, equivalent to 6, 8, 10 and 12 point; there was a
lowercase, and the numerals were non-ranging, a clear indication
that the face was intended not only for single display lines but for
text matter in many sorts of jobbing work, though not the ex¬
tensive text settings with which we are now familiar. The use of
sans-serif for that purpose did not occur until well into the pre¬
sent century, when the process of putting words into print ceased
to be a matter for the editor or compositor with an 'artistic' touch
and became the occupation of a new specialist, the typographer.
It is noticeable that up to about 1914 the type founders had
become quite competent at producing bold condensed sans-serif
types (Stephenson Blake, for instance, had several with much
more character than any types of that sort produced since that
date), but they seemed unable to instil any quality into faces of
normal weight and width. The capitals were dull, because there
was too little variations of width. The lowercase generally lacked
the balanced proportions that had gone into the modelling of the
bold version. The letters a, g, к, r and s were often ill at ease. It
would not have troubled Bruce Rogers if the lowercase had never

arrived. Speaking in 1938 and referring to the sans-serif form he -87-
said, '. . . it has been reproduced lately in almost innumerable The sans
versions, none of them fit for the printing of books. Indeed, the
lowercase, by reason of the principle of its construction, is unfit
for reading anywhere.' Not many people would have agreed with
those last four words at that time; even fewer now. The interest¬
ing phrase in his statement is 'principle of its construction', by
which I assume he meant the common weight of all the strokes as
well as the absence of serifs. Those are in fact the two essential
characteristics of the normal sans-serif face. There are types
without serifs but with a visible difference in the weight of the
strokes; the Britannic face, designed in Britain about the turn of
the century, is an example. So are Koloss and Radiant, the dis¬
tinctive Peignot, and more recently, the excellent Optima. And
there are types of monoline stroke weight and serifs - usually
very small. The Lining or Plate Gothics (called Spartan in Britain)
are types of that sort. All of those variations of the sans-serif form
are outside the area of these present notes. It is the regular sans-
serif letter form that is under scrutiny here; and to consider how
and why it became not only acceptable as a text face but, in the
minds of some people, the only proper type for that role, it is
necessary to look at two very different lines of development in
Britain and Germany in the 1920s.

The first was Edward Johnston's sans-serif design in 1916 for
the London public transport system. In spite of its being a
'private' type, not available for general use and therefore un¬
known outside the London area, it has a place in the history of
type design for a reason that will emerge shortly. The design has
always been accorded something like reverence by writers on
typography in Britain. In 1974, when the transport authority was
in doubt as to its continuing utility and asked some of us for an
opinion, I too expressed warm respect for the original intention
and admiration for the design itself- except for a few characters
which I was then encouraged to redesign. Even so, on further
thought I find my respect for the original project intact but my
admiration for the design somewhat diminished.

Edward Johnston revived the craft of calligraphy, and in his
own work he raised the craft to the quality of art. He is still
regarded as the greatest calligrapher of the twentieth century.
Calligraphy is writing. The calligrapher writes words. He does
not draw letters. Johnston's involvement in the creation of an
italic type for the Cranach Press had been an unhappy experience
for all concerned, because, as John Dreyfus's absorbing account
of it makes clear, Johnston was temperamentally incapable of
producing letter drawings for someone else (the punch-cutter) to
translate into metal, with satisfaction to himself as well as to
others. But the sans-serif project was a task of a different sort,
which he later spoke of with great pride.