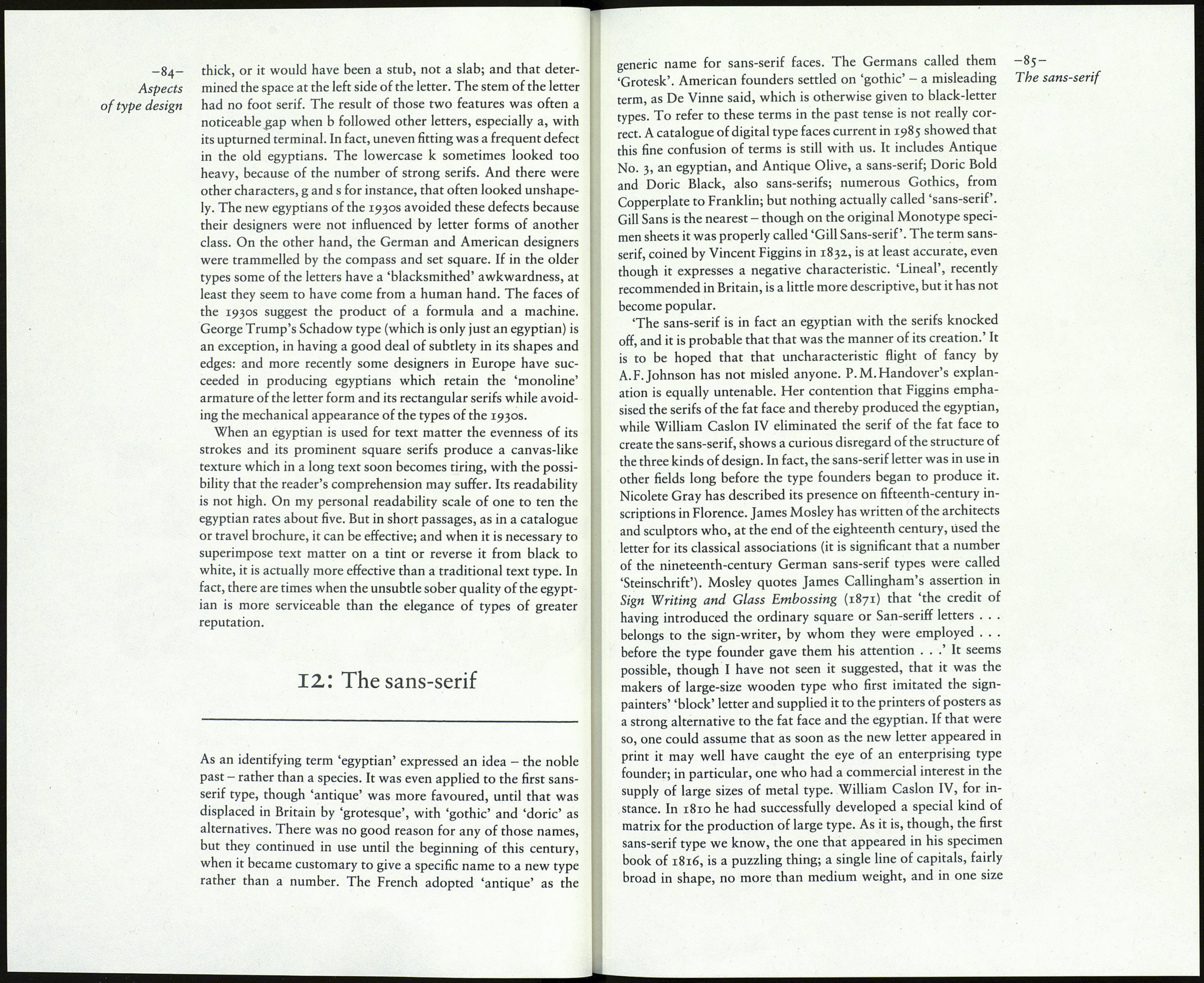 -82- to believe that a punch-cutter - essentially an artisan, not an
Aspects artist - could have thought up the egyptian, a letter form without
of type design a precedent in type. It has been suggested that the design was an
imitation of lettering that was already being used by the painters
of shop signs. That seems quite plausible. And it may be that the
egyptian was the first type to be designed in our sense of the word:
that is, each character carefully drawn on paper before manu¬
facture, perhaps by a professional sign painter commissioned by
the type founder to provide a pattern for his engraver to follow.
The special characteristics of the egyptian are two. The first is
the apparently equal weight of all the strokes. In a good design
there is actually a difference in the weights of main and secondary
strokes and some modelling of the curves. The difference is slight,
but just enough to give the type more vitality than one that lacks
the modulation. The other characteristic is the thick square-cut
serif, which is usually a little less thick than the main stroke. It is
the strong slab-like form of the serif, not the fact that it is un-
bracketed, that is of the essence in this class of type. (With those
two characteristics in mind it is hard to accept the suggestion that
the egyptian form was in Eric Gill's mind when he designed
the Solus type, which is really no more than a Perpetua-like
roman unhappily fitted with a thickened version of the serifs
of Monotype Bodoni 135, recommended to Gill by Stanley
Morison.)

The serif is the clue to a variation in the egyptian that was
developed in the middle of the nineteenth century. In the true
egyptian the serif forms a clean right-angle with the stroke. Then
a bracket was added, and a little of the weight was taken off the
secondary strokes and the serifs, though they remained substan¬
tial. The result was named Clarendon by one founder, Ionic by
another. These modulations brought the design a little closer to
the style of the then current text types, and Clarendon and Ionic

became popular as 'emphasisers' in text matter. The sturdiness of
Ionic was the reason for its being chosen as the basis for the
newspaper type of that name that was developed by Linotype in
the 1920s, the progenitor of a series of newspaper text faces
which have an important place in the history of twentieth-
century typography.

While Clarendon and Ionic acquired a continuing existence as
bold (though unrelated) companions to roman in text setting, the
egyptian as a display face declined in favour for many years,
supplanted by types of a more expressive kind. Then in the early

1930s, when creativity in type designing became vigorous, there
was a revival - not of the actual nineteenth-century egyptians but
of the idea of the slab-serif. It began in Germany where, as men¬
tioned above, the 'Egyptienne' was well known, if not actually
popular. Memphis Bold was the first of the new designs to ap¬
pear, in 1929, soon followed by the Beton face. Both designs
became popular, Memphis because it soon became available for
Linotype machine composition in America and later in Britain,
and Beton because it took the fancy of advertising agency typo¬
graphers. Karnak, Cairo, Stymie and Rockwell were others of the
ilk. The similarities in these new egyptians were greater than the
differences. All of them were true slab-serifs in the sense that the
serifs were unbracketed, and all of them get their character (such
as it is) from the application of 'geometry' to the letter forms, so
that curves are arcs of a circle (or appear to be so) and all the
strokes are of regular thickness, with serifs to match. The 'mech¬
anical' effect that this produces has caused some writers to rate
the egyptians of the 1930s as inferior to those of the nineteenth
century - which is reasonable, though only up to a point. In the
older faces the quality was in their capitals which, in the heavy
versions, presented a powerful blocky effect and, incidentally,

Some letters from Charles Hasler's type face for the Festival of Britain, 1951.

provided a good ground for engraving and shadowing; and in
the light 'skeleton' versions the clear linear structure of the cap¬
itals provided a high degree of legibility, a fact which is
recognised today by some designers of TV graphics. But the
lowercase letters in the older egyptians were seldom as good as
the capitals, particularly in the bold versions. The characteristics
of the 'modern' roman prevailing when the egyptians were
created were a dominating influence; and in some letters they
conflicted with the form of the slab-serif. The lowercase b was a
particular case. Its head serif obviously had to be wide as well as