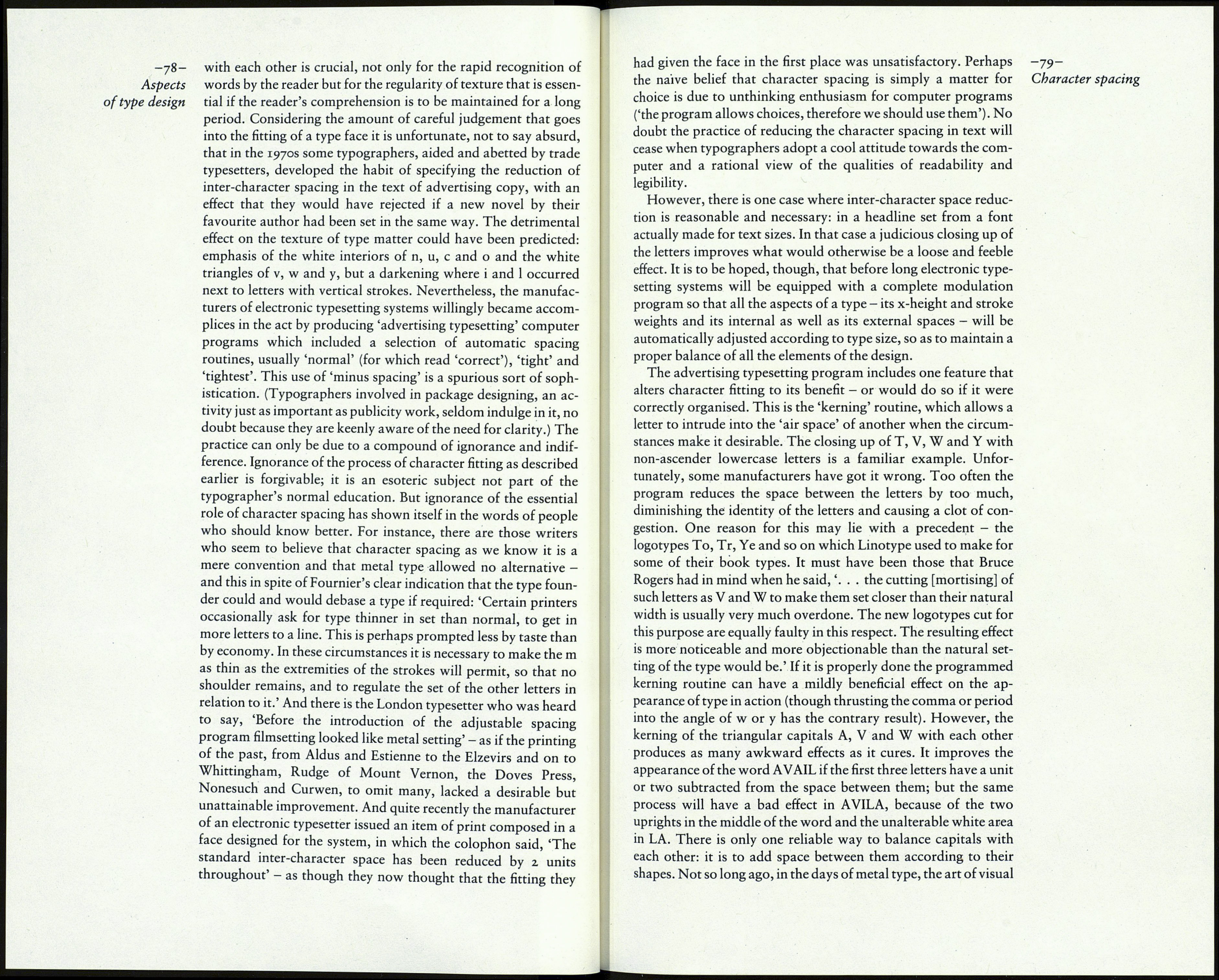 -76- positioned below each other. That means, of course, that they
Aspects must all occupy the same width, in spite of their differences in
of type design shape and proportion. In the days of foundry-made type the
common practice was to make the em space as wide as it was tall
- a square of the type size, in fact - and the en space exactly half of
that width. Numerals were made to the width of the en space, so
columns of figures could be justified with em and en spaces ac¬
cording to the number of figures in each line. Monotype followed
that principle, though the em space was not necessarily a square
of the type size. This meant that in the text sizes of most
Monotype faces the numerals were 9 units wide (the em being
18 units). That width is adequate for non-lining (old style)
numerals; but it is really too narrow for lining numerals - the
zero in particular often looking unhappily pinched amongst
otherwise normal characters. In recognition of this, and because
lining figures have always been preferred in America, Linotype's
custom of placing the numerals on the width of the en of the next
size up, in type faces up to 10 or 11 point, gave a little more ad¬
vantage to the appearance of the 4 and the zero.

There are very few types (Galliard is one of them) where the
designer has been allowed to design an alternative set of figures,
each with a width and fitting suited to its shape. In most types the
designer is obliged to conform to the rule that numerals must be
'tabular', uniform in width - only the figure 1 sometimes being
allowed to be on a narrower width. This means that the designer
must space the numerals individually, centring them visually in
the width prescribed by the manufacturer.

Punctuation marks, too, are special cases. The modern habit of
placing them on the narrowest width possible is not a good one.
They are essentially functional, and need enough space to be
clearly visible. The comma and period can very well be centred
on a half of the figure width (if the unit system allows that).
American usage requires the colon to be centred in its area, for
use in numerical indications of time, so the colon should be
spaced like the period. But when the colon is used as a punctu¬
ation sign it ought to be set slightly apart from the word it follows
- a matter for the typographer and printer to take care of. The
same applies to the semi-colon. Bruce Rogers pointed out in his
Paragraphs on Printing that exclamation and question marks
should also be set off from the last word because they often form
disagreeable and confusing combinations with the last letter,
especially if it is 1 or f. The designer should therefore place them
off-centre on sufficient width to keep them clear of the preceding
letter.

Like the other signs, quotation marks, single and double, make
their full effect when they stand slightly apart from the letters.
The double opening quote, which is often followed by a capital,
especially in conversational wording, should be given a unit or

two of space on its right-hand side. If there is also a single opening -77-

quote in the font it should be treated in the same way; but if the Character spacing

a pair of them, set in response to a demand for double quotes,

will look too loose. The closing double quote usually follows

lowercase letters; so does the apostrophe, in its own role and

when it acts as the closing single quote. No extra space should be

applied to the left-hand side in the manufacture. A keyboard

add a little space if the quote follows a tall letter.

The process just described must sound like a suitable case for a
computer program, with modifying factors written in to take
care of the variables between type faces. I do not think it could
ever be wholly reliable. The features that make one type different
from another have an influence on the fitting of the characters
in a way that is not calculable, because the matter is one for
aesthetic judgement, not arithmetic. Software might facilitate the
task of spacing, but the designer's eye must be the arbiter.

In the spacing process the designer, working with his drawn
letters, will have been using his imagination to visualise the
characters and their fitting in actual type size. This is not easy,
and no one expects the result to be right first time. So when the
manufacture is completed a trial proof is produced for the ex¬
press purpose of scrutinising the fitting, the characters being
composed between standards at an appropriate type size, usu¬
ally 12 point if the type is a text face. Some designers use only
the capital H as the controlling standard, on the ground that
it is entirely symmetrical in shape and spacing. The method
has the disadvantage that lowercase letters seen like this,
HaHbHcHdHeH, are not in a natural context. There is another
method: to set the alphabets with their own standards, thus:
HAHBHCHDHEH and OOAOBOCODO and so on, and nnan-
bncndnen and ooaoboco . . . That is a good way to disclose
inequalities of spacing. But something more is needed - some¬
thing life-like. Actual .words must also be composed, to show all
the letters in normal relationships; not only with other letters, but
with themselves, because in most languages letters are frequently
doubled (in English, the only letters which almost never double
are a, h, i, j, q, u, x and y). A lowercase 1 with too little side
spacing, as in some versions of Helvetica, makes an unfortunate
clotted effect in such a word as 'million'. And an m too condensed
in comparison with n, as in Goudy's Californian roman, would
probably have been revised if the designer had checked it in a test
setting that included words like 'common' and 'minimum'.

Letters do not live in isolation. They are the elements of meaning,
the components of visible language, and their spatial relationship