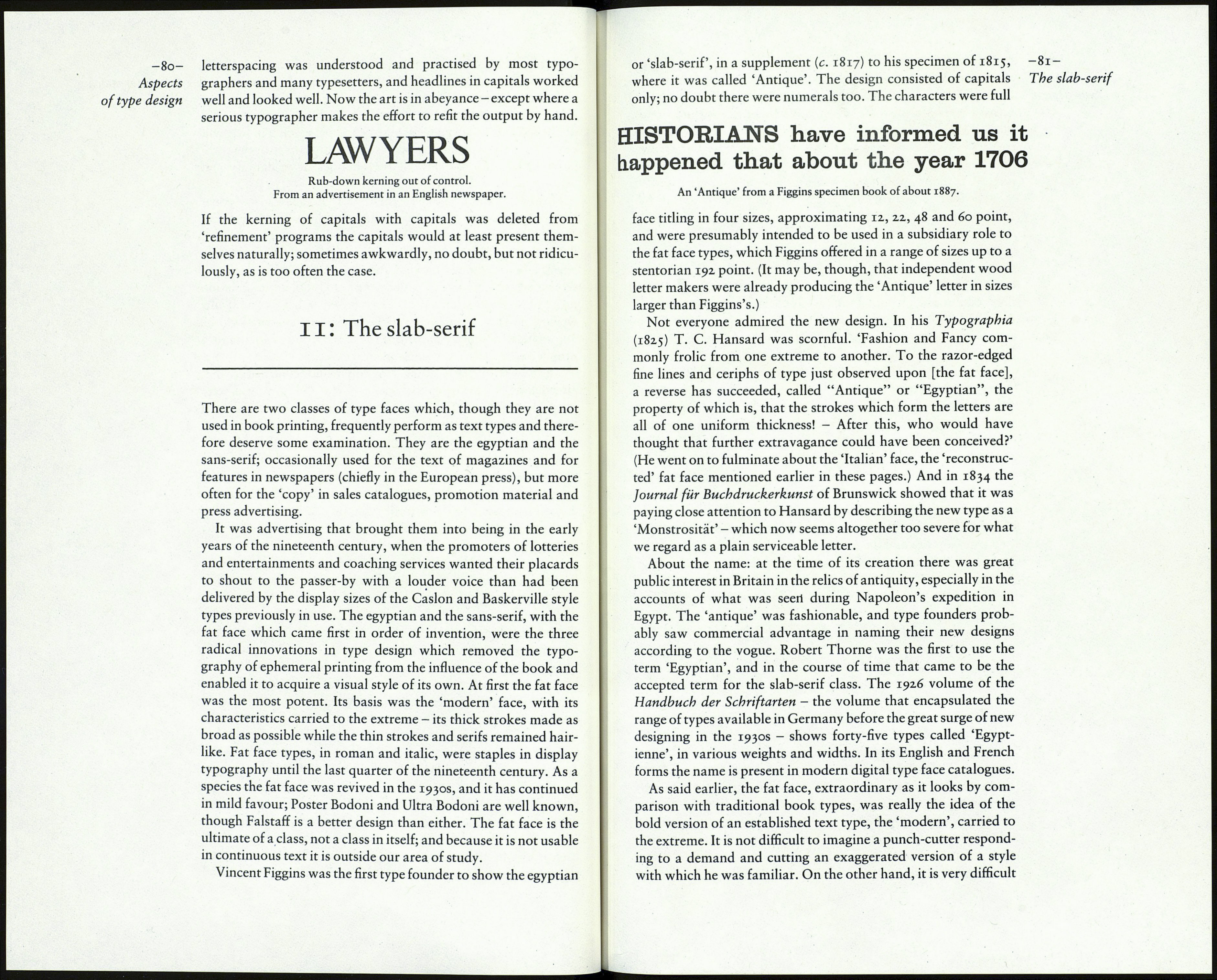 -78- with each other is crucial, not only for the rapid recognition of
Aspects words by the reader but for the regularity of texture that is essen-
o/ type design tial if the reader's comprehension is to be maintained for a long
period. Considering the amount of careful judgement that goes
into the fitting of a type face it is unfortunate, not to say absurd,
that in the 1970s some typographers, aided and abetted by trade
typesetters, developed the habit of specifying the reduction of
inter-character spacing in the text of advertising copy, with an
effect that they would have rejected if a new novel by their
favourite author had been set in the same way. The detrimental
effect on the texture of type matter could have been predicted:
emphasis of the white interiors of n, u, с and о and the white
triangles of v, w and y, but a darkening where i and 1 occurred
next to letters with vertical strokes. Nevertheless, the manufac¬
turers of electronic typesetting systems willingly became accom¬
plices in the act by producing 'advertising typesetting' computer
programs which included a selection of automatic spacing
routines, usually 'normal' (for which read 'correct'), 'tight' and
'tightest'. This use of 'minus spacing' is a spurious sort of soph¬
istication. (Typographers involved in package designing, an ac¬
tivity just as important as publicity work, seldom indulge in it, no
doubt because they are keenly aware of the need for clarity.) The
practice can only be due to a compound of ignorance and indif¬
ference. Ignorance of the process of character fitting as described
earlier is forgivable; it is an esoteric subject not part of the
typographer's normal education. But ignorance of the essential
role of character spacing has shown itself in the words of people
who should know better. For instance, there are those writers
who seem to believe that character spacing as we know it is a
mere convention and that metal type allowed no alternative -
and this in spite of Fournier's clear indication that the type foun¬
der could and would debase a type if required: 'Certain printers
occasionally ask for type thinner in set than normal, to get in
more letters to a line. This is perhaps prompted less by taste than
by economy. In these circumstances it is necessary to make the m
as thin as the extremities of the strokes will permit, so that no
shoulder remains, and to regulate the set of the other letters in
relation to it.' And there is the London typesetter who was heard
to say, 'Before the introduction of the adjustable spacing
program filmsetting looked like metal setting' - as if the printing
of the past, from Aldus and Estienne to the Elzevirs and on to
Whittingham, Rudge of Mount Vernon, the Doves Press,
Nonesuch and Curwen, to omit many, lacked a desirable but
unattainable improvement. And quite recently the manufacturer
of an electronic typesetter issued an item of print composed in a
face designed for the system, in which the colophon said, 'The
standard inter-character space has been reduced by 2 units
throughout' - as though they now thought that the fitting they

had given the face in the first place was unsatisfactory. Perhaps —79-
the naive belief that character spacing is simply a matter for Character spacing
choice is due to unthinking enthusiasm for computer programs
('the program allows choices, therefore we should use them'). No
doubt the practice of reducing the character spacing in text will
cease when typographers adopt a cool attitude towards the com¬
puter and a rational view of the qualities of readability and
legibility.

However, there is one case where inter-character space reduc¬
tion is reasonable and necessary: in a headline set from a font
actually made for text sizes. In that case a judicious closing up of
the letters improves what would otherwise be a loose and feeble
effect. It is to be hoped, though, that before long electronic type¬
setting systems will be equipped with a complete modulation
program so that all the aspects of a type - its x-height and stroke
weights and its internal as well as its external spaces - will be
automatically adjusted according to type size, so as to maintain a
proper balance of all the elements of the design.

The advertising typesetting program includes one feature that
alters character fitting to its benefit - or would do so if it were
correctly organised. This is the 'kerning' routine, which allows a
letter to intrude into the 'air space' of another when the circum¬
stances make it desirable. The closing up of T, V, W and Y with
non-ascender lowercase letters is a familiar example. Unfor¬
tunately, some manufacturers have got it wrong. Too often the
program reduces the space between the letters by too much,
diminishing the identity of the letters and causing a clot of con¬
gestion. One reason for this may lie with a precedent - the
logotypes To, Tr, Ye and so on which Linotype used to make for
some of their book types. It must have been those that Bruce
Rogers had in mind when he said, '. . . the cutting [mortising] of
such letters as V and W to make them set closer than their natural
width is usually very much overdone. The new logotypes cut for
this purpose are equally faulty in this respect. The resulting effect
is more noticeable and more objectionable than the natural set¬
ting of the type would be.' If it is properly done the programmed
kerning routine can have a mildly beneficial effect on the ap¬
pearance of type in action (though thrusting the comma or period
into the angle of w or y has the contrary result). However, the
kerning of the triangular capitals A, V and W with each other
produces as many awkward effects as it cures. It improves the
appearance of the word AVAIL if the first three letters have a unit
or two subtracted from the space between them; but the same
process will have a bad effect in AVILA, because of the two
uprights in the middle of the word and the unalterable white area
in LA. There is only one reliable way to balance capitals with
each other: it is to add space between them according to their
shapes. Not so long ago, in the days of metal type, the art of visual