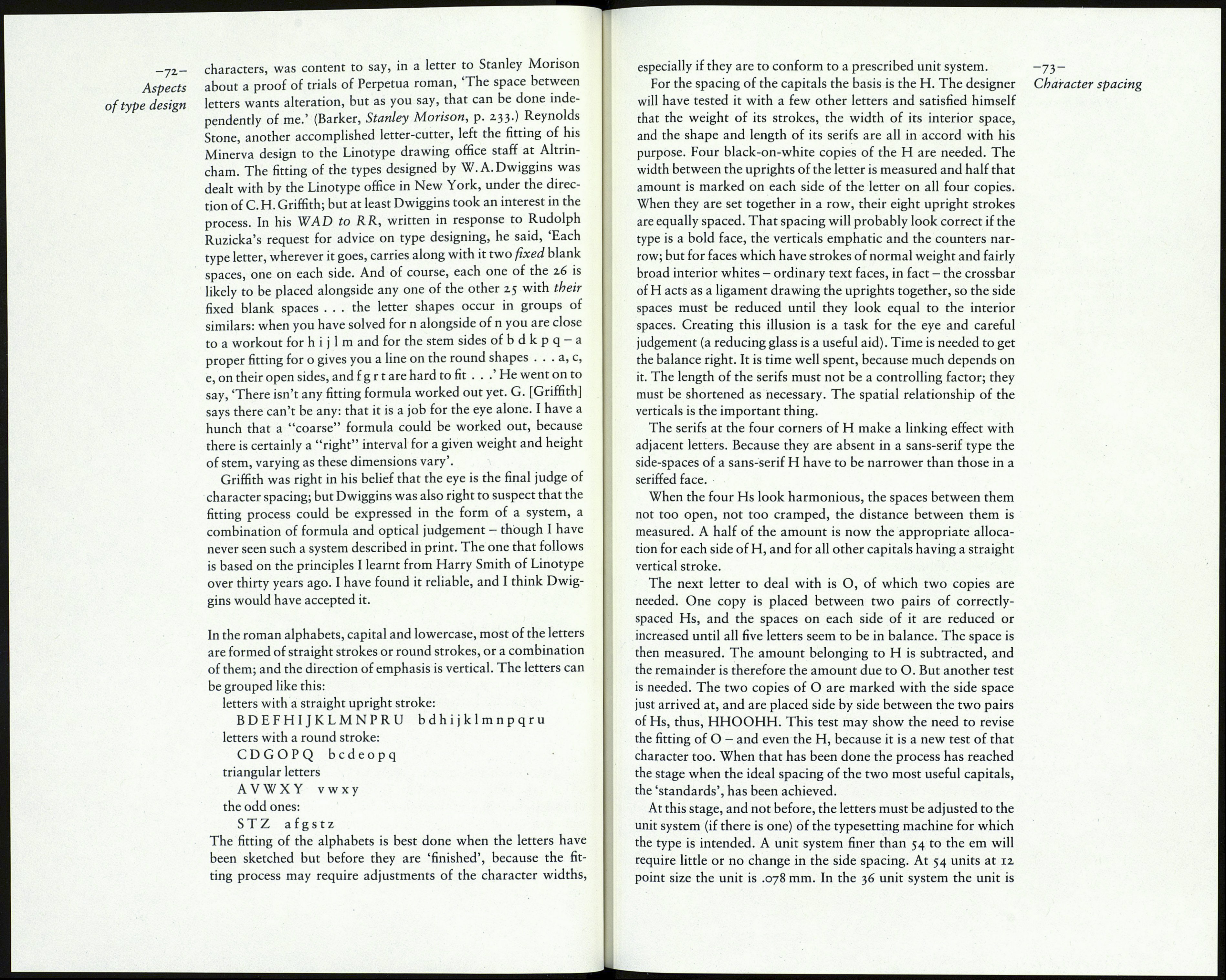 I9I4-IQI8
The descending 8 in the original version of Schneidler Medieval, 1936.

The small zero in the early fonts of Gill Sans.

and transitional faces meant for text composition. Indeed, in
the days of metal type they frequently did so. But now it is not
so easy. The typographer or conscientious printer who tries to
obtain old style figures has a hard task to face. And now that elec¬
tronic typesetting is the common thing the manufacturer claims
to have a clinching case for supplying only lining numerals,
even in types of the classic old style sort. The reason is this. As
well as their function in the representation of whole numbers,
figures are the components of fractions (which continue in use
in spite of the metric system). Tidy-looking fractions cannot be
made from old style numerals, with their variations in size; so
fraction figures obviously have to be of the lining form. It is now
common practice in CRT and laser typesetting systems for a
'fraction routine' in the computer program automatically to
'create' the numerator of the fraction by miniaturising the font
figure and elevating it to ascender level (as a superior figure, in
fact), and to make the denominator by similarly reducing a figure
but keeping it on the baseline, a bar being set between the two
parts of the fraction. It is a trick that clearly requires the numerals
in the font to be of the lining style.

The typographer or printer with a strong desire for visual
harmony in letters and figures is obliged to accept that that in¬
genious facility is necessary, but has to try to persuade manu¬
facturers to recognise that old style numerals are aesthetically
important for certain type faces in good quality typesetting, and
should be readily available as conveniently accessible additions
to the font. Manufacturers with long involvement in printing
understand this. With others, who may see the thing only as a
pointless fancy, persistence is needed.

'It is difficult to appreciate without seeing a demonstration how
completely a letter is altered by having more or less space about
it. The success or failure of a type is very much a question of

getting a good balance of white inside and outside the letters'. -71-

Thus Harry Carter, who had a much better appreciation of type Character spacing

than most of us. The interior areas of letters are fixed by the shape

of the letters, but the spaces at each side of them are at will: at the

will of the type designer, if he is doing his work thoroughly; at the

will of the manufacturer's drawing office, if the designer has

abdicated his duty to organise the spacing of his characters; at the

will of the printer or his customer, who (unfortunately) can

nowadays change right to wrong with impunity. The 'fitting' of

of them, so that when they are associated into words they have a

balanced relationship, without unsightly gaps or congestion — is a

process fundamental to the success of a type design; but it is

not always managed with total satisfaction. Harry Carter was

critical of the revived Van Dijck type. 'The greatest defect of the

13-point size is that it is on too narrow a set. If it were more

William Caslon cut his types on the Dutch pattern,
and undoubtedly took van Dyck's romans and italics for
his models. For a long time the fount of English used for
printing Seiden's Works, 1726, has been ascribed to
Caslon, but Mr. A. F. Johnson has recently proved that
the italic of the fount in question was the work of van
Dyck and that the roman was also a Dutch importation.

loosely spaced it would be much more comfortable to read and
the letters would look much handsomer'. I think the same may be
said of certain sizes of Monotype Bell, which evidently follow the
tight fitting of the original face of 1788. By contrast, William
Morris's Golden type was too loose. So was the metal version of

С Travaile, in the younger Sort, is a
Part of Education; In the Elder, a Part
of Experience. He that travaileth into a
Country, before he hath some Entrance
into the Language, goeth to Schoole, and
not to Travaile. That Youn g M en travaile

Gill Sans, which was spaced, I suspect, as if it were a seriffed face.
The type designer should be as concerned about the texture
of his type en masse as about the shapes of the individual charac¬
ters, and he or she ought to regard the fitting of them as an
inescapable part of the design task. But some designers have left it
to others. Eric Gill, for instance, who, from his experience as an
inscriptional letter-cutter, had an expert sense of the spacing of