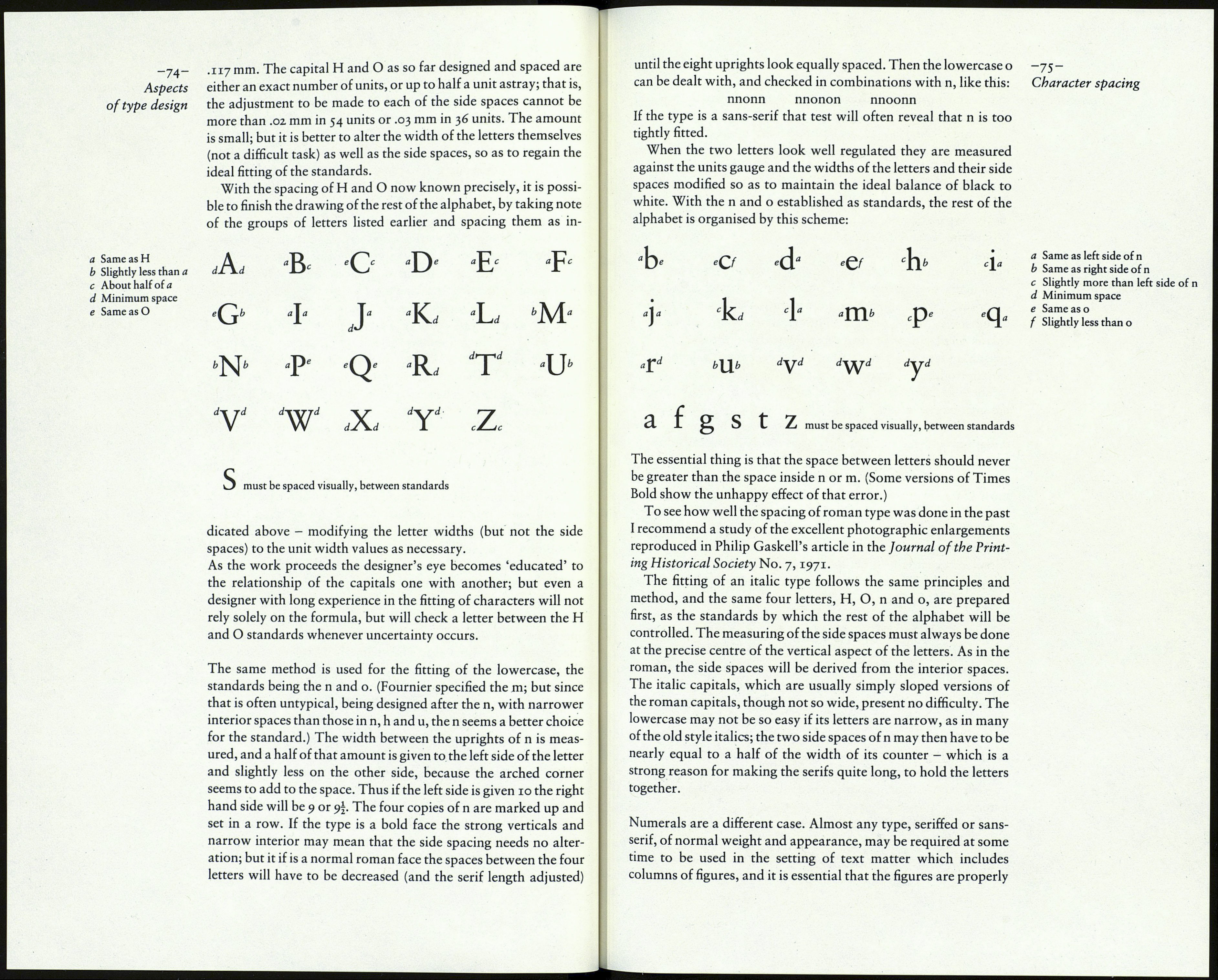 -72- characters, was content to say, in a letter to Stanley Morison
Aspects about a proof of trials of Perpetua roman, 'The space between
of type design letters wants alteration, but as you say, that can be done inde¬
pendently of me.' (Barker, Stanley Morison, p. 233.) Reynolds
Stone, another accomplished letter-cutter, left the fitting of his
Minerva design to the Linotype drawing office staff at Altrin-
cham. The fitting of the types designed by W. A. Dwiggins was
dealt with by the Linotype office in New York, under the direc¬
tion of С H. Griffith; but at least Dwiggins took an interest in the
process. In his WAD to RR, written in response to Rudolph
Ruzicka's request for advice on type designing, he said, 'Each
type letter, wherever it goes, carries along with it two fixed blank
spaces, one on each side. And of course, each one of the 26 is
likely to be placed alongside any one of the other 25 with their
fixed blank spaces ... the letter shapes occur in groups of
similars: when you have solved for n alongside of n you are close
to a workout for h i j 1 m and for the stem sides ofbdkpq-a
proper fitting for о gives you a line on the round shapes . . . a, c,
e, on their open sides, and f g r t are hard to fit . . .' He went on to
say, 'There isn't any fitting formula worked out yet. G. [Griffith]
says there can't be any: that it is a job for the eye alone. I have a
hunch that a "coarse" formula could be worked out, because
there is certainly a "right" interval for a given weight and height
of stem, varying as these dimensions vary'.

Griffith was right in his belief that the eye is the final judge of
character spacing; but Dwiggins was also right to suspect that the
fitting process could be expressed in the form of a system, a
combination of formula and optical judgement - though I have
never seen such a system described in print. The one that follows
is based on the principles I learnt from Harry Smith of Linotype
over thirty years ago. I have found it reliable, and I think Dwig¬
gins would have accepted it.

In the roman alphabets, capital and lowercase, most of the letters
are formed of straight strokes or round strokes, or a combination
of them; and the direction of emphasis is vertical. The letters can
be grouped like this:

letters with a straight upright stroke:

BDEFHIJKLMNPRU bdhi j к 1 m n pqr u
letters with a round stroke:

AVWXY vwxy
the odd ones:
STZ afgstz
The fitting of the alphabets is best done when the letters have
been sketched but before they are 'finished', because the fit¬
ting process may require adjustments of the character widths,

especially if they are to conform to a prescribed unit system. _73_

For the spacing of the capitals the basis is the H. The designer Character spacing
will have tested it with a few other letters and satisfied himself
that the weight of its strokes, the width of its interior space,
and the shape and length of its serifs are all in accord with his
purpose. Four black-on-white copies of the H are needed. The
width between the uprights of the letter is measured and half that
amount is marked on each side of the letter on all four copies.
When they are set together in a row, their eight upright strokes
are equally spaced. That spacing will probably look correct if the
type is a bold face, the verticals emphatic and the counters nar¬
row; but for faces which have strokes of normal weight and fairly
broad interior whites - ordinary text faces, in fact — the crossbar
of H acts as a ligament drawing the uprights together, so the side
spaces must be reduced until they look equal to the interior
spaces. Creating this illusion is a task for the eye and careful
judgement (a reducing glass is a useful aid). Time is needed to get
the balance right. It is time well spent, because much depends on
it. The length of the serifs must not be a controlling factor; they
must be shortened as necessary. The spatial relationship of the
verticals is the important thing.

The serifs at the four corners of H make a linking effect with
adjacent letters. Because they are absent in a sans-serif type the
side-spaces of a sans-serif H have to be narrower than those in a
seriffed face.

When the four Hs look harmonious, the spaces between them
not too open, not too cramped, the distance between them is
measured. A half of the amount is now the appropriate alloca¬
tion for each side of H, and for all other capitals having a straight
vertical stroke.

The next letter to deal with is O, of which two copies are
needed. One copy is placed between two pairs of correctly-
spaced Hs, and the spaces on each side of it are reduced or
increased until all five letters seem to be in balance. The space is
then measured. The amount belonging to H is subtracted, and
the remainder is therefore the amount due to O. But another test
is needed. The two copies of О are marked with the side space
just arrived at, and are placed side by side between the two pairs
of Hs, thus, HHOOHH. This test may show the need to revise
the fitting of О - and even the H, because it is a new test of that
character too. When that has been done the process has reached
the stage when the ideal spacing of the two most useful capitals,
the 'standards', has been achieved.

At this stage, and not before, the letters must be adjusted to the
unit system (if there is one) of the typesetting machine for which
the type is intended. A unit system finer than 54 to the em will
require little or no change in the side spacing. At 54 units at 12
point size the unit is .078 mm. In the 36 unit system the unit is