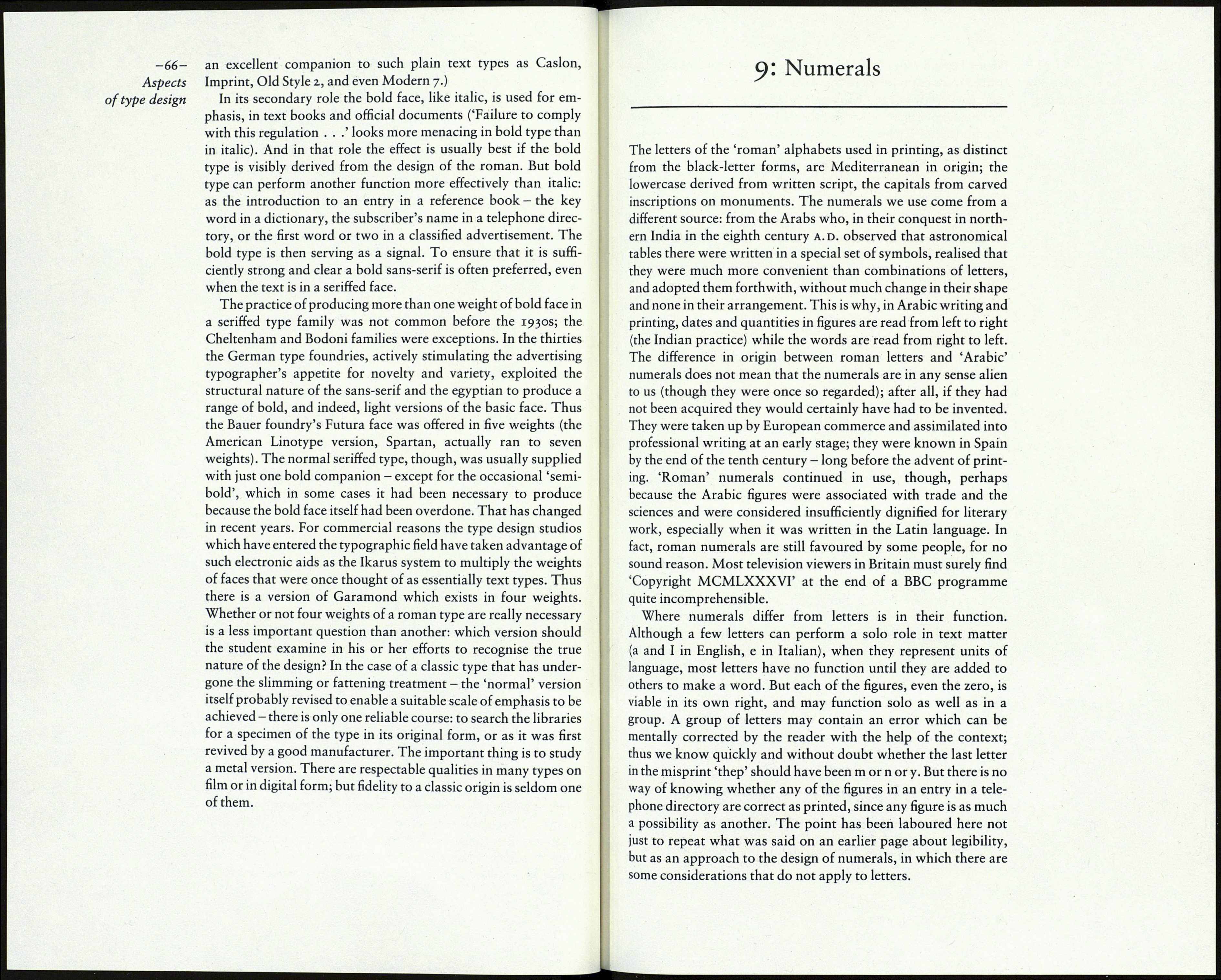 _64- style. When they were joined a little later by a flowing f their effect
Aspects on the appearance of the italic was much stronger than their
of type design number. They contributed to the face just enough of the stylistic
contrast which must be present in addition to the slope if a sec¬
ondary type is to be attractive as well as effective. Morison him¬
self came to see this when he instigated the Times Roman faces in
the following year and included an italic which was in no sense a
sloped roman, and, as he said later, 'owed more to Didot than
dogma'.

Perpetua italic is a hybrid. Most of the lowercase letters are
sloped versions of the roman, those letters with vertical strokes,
like m, being equipped with seriffed feet planted firmly on the
baseline. The alphabet, though, is vitalised by the four charac¬
ters, together with the к added later, that relieve what would
otherwise be a dull set of letters. It is a modified sloped roman,
and should be so classified. Gill's Joanna italic and the italic
devised by Linotype to work with the Pilgrim roman (Gill's
Bunyan) are other examples. So too are the italics of Melior and
Trump Medieval. The modified sloped roman is better than the

undiluted sort; but most people would probably prefer an auth¬
entic italic.

The mistakes of great men are as interesting, and often as in¬
structive and valuable, as their achievements. Morison's evan¬
gelising for sloped roman has been recalled here for two reasons.
Ittemporarily influenced Van Krimpen and Dwiggins, whose work
is to be discussed in later pages, and it provides the ground for a
judgement of the sloped romans that are being produced today
- not by type designers, who rightly show little interest in the
idea, but by typesetters, who bring sloped romans into existence
at the touch of the 'slant-on' button. The face that emerges is not
a new design, and it has no physical existence; it is simply an ac¬
ceptably distorted image of the roman.

When the first CRT typesetting machines came into use in the
early 1970s they had the high rate of output desired for news¬
paper work, but limited font capacity. So some production
people took advantage of the facility in the С RT system by which
the angle of the traverse of the light spot can be changed, usually
12 degrees either side of the vertical (the slant to the left gives a
new look to Hebrew and Arabic composition). Having dis¬
covered that the effect of sloping a roman was accepted, some of
them have continued the practice, even when the typesetting sy¬
stem has been replaced by one with larger font capacity. Accep¬
tance, to the typographic eye, depends on the kind of roman type,

and where it appears. To express a personal view: sloped versions -65 -
of book types invariably make a poor effect; but types which tend Secondary types
towards the egyptian form can be tolerable - though hardly ad- italic, bold face
mirable. Thus a sloped Excelsior makes an acceptable stand-in
for the actual italic of the type, as some German newspapers have
discovered. (The custom in European newspapers of using italic
for some news items is better than the British habit of using bold
type for text matter - there being very few good-looking bold
companions to news text faces.) The capitals of a machine-
slanted face may look a little wide, and the roman lowercase a
always looks, literally, taken aback; but these defects are less
important in a newspaper than elsewhere, because though we
expect the text of a newspaper to be readable we don't demand
that it be elegant. And the same is true of the utilitarian kind of
reference work, such as a trade directory - but not a dictionary,
which ought to be typographically well dressed, though some
publishers evidently think sloped roman is good enough for it.

There is, then, a class of printing where, it seems to me, the
sloped roman is tolerable, if the typesetting system has limited

font capacity and the omission of the 'real' italic allows room for
another useful face. But for printing in which the type matter is
intended to have visual as well as verbal interest - most publicity,
and all book work - only the traditional styles of italic are
acceptable. Which style - the narrow, deliberately graceful
'chancery' style of the first half of the sixteenth century, or the
broader, less expressive form of Fournier's italics, or something
in between - depends chiefly on the style of the roman, but also
on the designer's awareness of the nature of italic and his ability
to harmonise the italic with his roman. Even quite eminent
designers have sometimes produced an uneasy alliance instead
of a perfect marriage.

The other kind of secondary type, the related bold face, is a
twentieth-century creation. Although the use of bold type for
emphasis in text began when display advertising became a
feature of the family magazines of the mid-nineteenth century,
the bold types themselves were clarendons, ionics and antiques
quite unrelated to the old styles and moderns used for the text.
As late as 1938 the Monotype Recorder, a distinguished British
journal of typography, could say, 'The "related bold" is a com¬
paratively new phenomenon in the history of type cutting.'
(One reason for that was Monotype's own Series 53, a bold
roman in the old face mode which had for many years served as