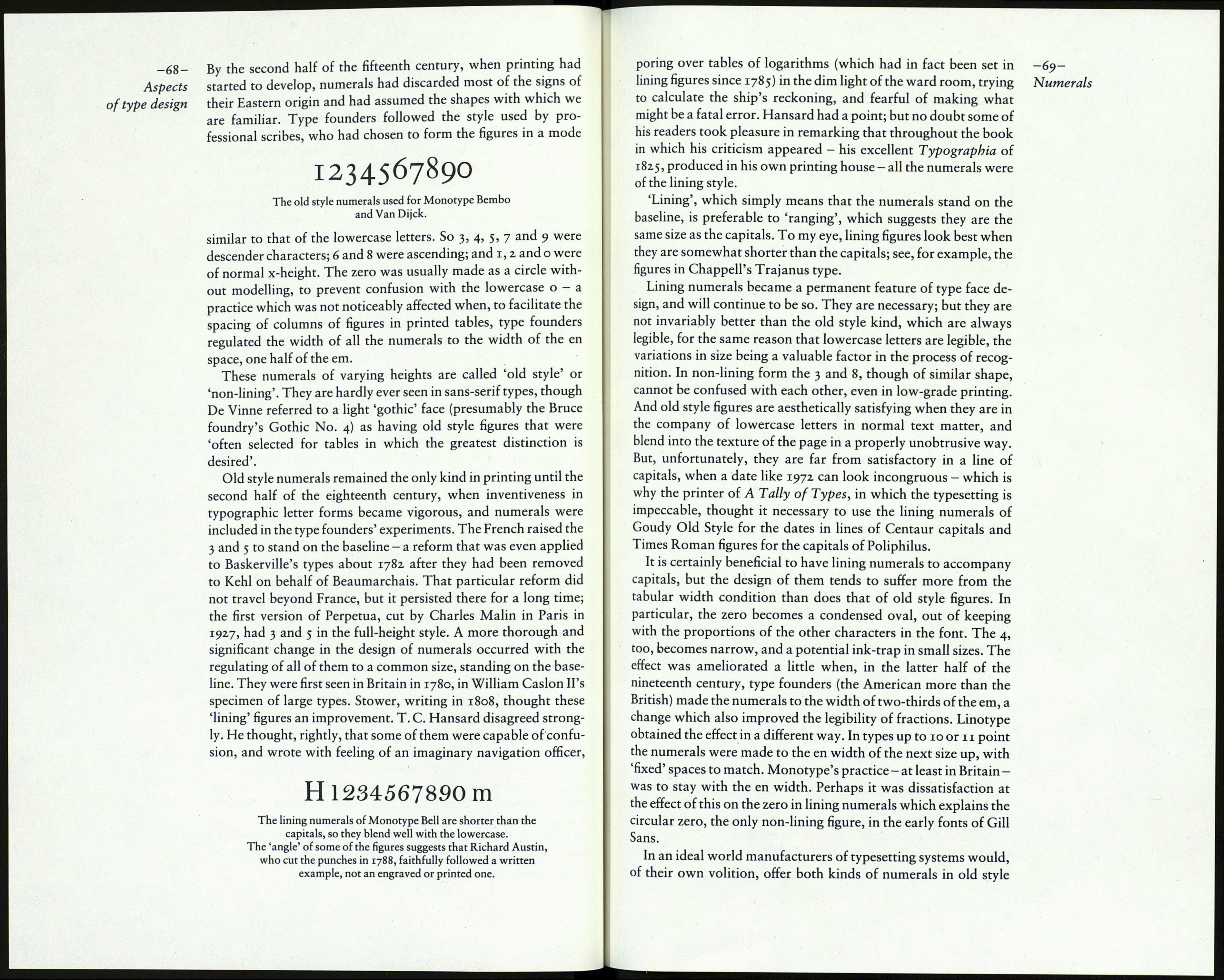 -66- an excellent companion to such plain text types as Caslon,
Aspects Imprint, Old Style 2, and even Modern 7.)
of type design In its secondary role the bold face, like italic, is used for em¬

phasis, in text books and official documents ('Failure to comply
with this regulation . . .' looks more menacing in bold type than
in italic). And in that role the effect is usually best if the bold
type is visibly derived from the design of the roman. But bold
type can perform another function more effectively than italic:
as the introduction to an entry in a reference book - the key
word in a dictionary, the subscriber's name in a telephone direc¬
tory, or the first word or two in a classified advertisement. The
bold type is then serving as a signal. To ensure that it is suffi¬
ciently strong and clear a bold sans-serif is often preferred, even
when the text is in a seriffed face.

The practice of producing more than one weight of bold face in
a seriffed type family was not common before the 1930s; the
Cheltenham and Bodoni families were exceptions. In the thirties
the German type foundries, actively stimulating the advertising
typographer's appetite for novelty and variety, exploited the
structural nature of the sans-serif and the egyptian to produce a
range of bold, and indeed, light versions of the basic face. Thus
the Bauer foundry's Futura face was offered in five weights (the
American Linotype version, Spartan, actually ran to seven
weights). The normal seriffed type, though, was usually supplied
with just one bold companion - except for the occasional 'semi-
bold', which in some cases it had been necessary to produce
because the bold face itself had been overdone. That has changed
in recent years. For commercial reasons the type design studios
which have entered the typographic field have taken advantage of
such electronic aids as the Ikarus system to multiply the weights
of faces that were once thought of as essentially text types. Thus
there is a version of Garamond which exists in four weights.
Whether or not four weights of a roman type are really necessary
is a less important question than another: which version should
the student examine in his or her efforts to recognise the true
nature of the design? In the case of a classic type that has under¬
gone the slimming or fattening treatment - the 'normal' version
itself probably revised to enable a suitable scale of emphasis to be
achieved - there is only one reliable course: to search the libraries
for a specimen of the type in its original form, or as it was first
revived by a good manufacturer. The important thing is to study
a metal version. There are respectable qualities in many types on
film or in digital form; but fidelity to a classic origin is seldom one
of them.

The letters of the 'roman' alphabets used in printing, as distinct
from the black-letter forms, are Mediterranean in origin; the
lowercase derived from written script, the capitals from carved
inscriptions on monuments. The numerals we use come from a
different source: from the Arabs who, in their conquest in north¬
ern India in the eighth century A.D. observed that astronomical
tables there were written in a special set of symbols, realised that
they were much more convenient than combinations of letters,
and adopted them forthwith, without much change in their shape
and none in their arrangement. This is why, in Arabic writing and
printing, dates and quantities in figures are read from left to right
(the Indian practice) while the words are read from right to left.
The difference in origin between roman letters and 'Arabic'
numerals does not mean that the numerals are in any sense alien
to us (though they were once so regarded); after all, if they had
not been acquired they would certainly have had to be invented.
They were taken up by European commerce and assimilated into
professional writing at an early stage; they were known in Spain
by the end of the tenth century - long before the advent of print¬
ing. 'Roman' numerals continued in use, though, perhaps
because the Arabic figures were associated with trade and the
sciences and were considered insufficiently dignified for literary
work, especially when it was written in the Latin language. In
fact, roman numerals are still favoured by some people, for no
sound reason. Most television viewers in Britain must surely find
'Copyright MCMLXXXVr at the end of a BBC programme
quite incomprehensible.

Where numerals differ from letters is in their function.
Although a few letters can perform a solo role in text matter
(a and I in English, e in Italian), when they represent units of
language, most letters have no function until they are added to
others to make a word. But each of the figures, even the zero, is
viable in its own right, and may function solo as well as in a
group. A group of letters may contain an error which can be
mentally corrected by the reader with the help of the context;
thus we know quickly and without doubt whether the last letter
in the misprint 'thep' should have been m or n or y. But there is no
way of knowing whether any of the figures in an entry in a tele¬
phone directory are correct as printed, since any figure is as much
a possibility as another. The point has been laboured here not
just to repeat what was said on an earlier page about legibility,
but as an approach to the design of numerals, in which there are
some considerations that do not apply to letters.