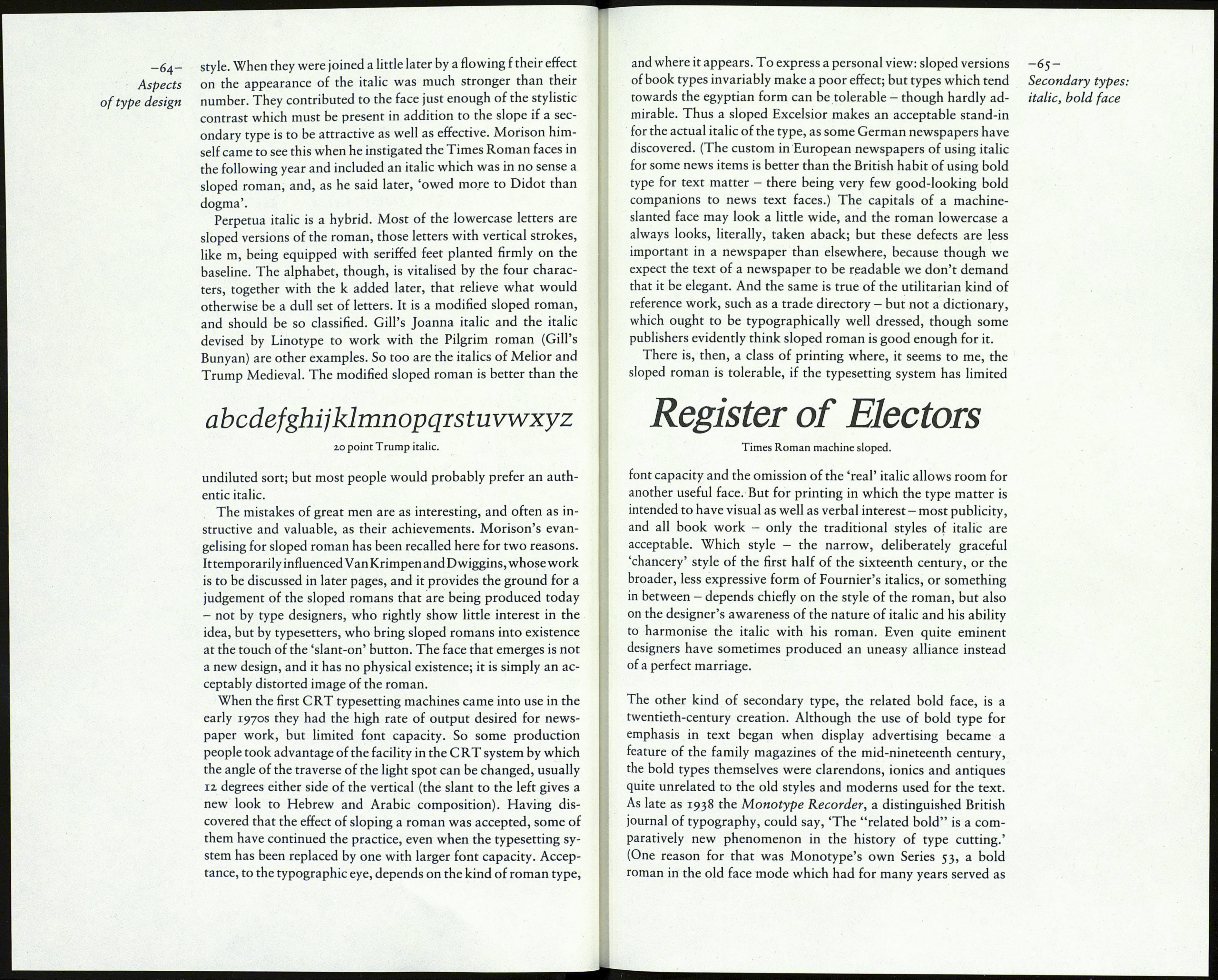 -6z- distinctly different values. His article 'Towards an Ideal Italic', in
Aspects the fifth volume of The Fleuron (1926), is one of the most remark -
oftype design able of his writings. The first half is a valuable account of the
history of the italic form, in which he records and illustrates the
change from the calligraphic appearance of the early types, with
their wealth of tied letters, to the disciplined italics of the eight¬
eenth century. He mentions the italic of Grandjean's romain du
roi, which A.F.Johnson said was the first example of a true sec¬
ondary italic, designed for, and at the same time as, a specific
roman. Morison speaks of an italic cut for F. A. Didot as being
'the best example there has been of a regular formal italic' but
remarks that 'it is to be regretted that all trace of calligraphic
originals has not been removed'. He then moves to the chief
purpose of the article: to advance the proposition that the in¬
formality of italic as we know it is incompatible with the calm
regularity of roman; that its single useful characteristic is its
slope, which is all that is needed to provide differentiation; and
that therefore the truest type to serve in the secondary role is a
sloped version of the roman. He argued the case with his custom¬
ary vigour. 'Certainly a type of conspicuously different colour
and design from that of the roman cannot be tolerated, for it is
clear that maximum repose will attach to a page where the roman
and italic most nearly approximate.' He illustrated his proposal
with a selection of characters from the Caslon face, in their
roman form and also specially drawn to an angle of 15 degrees.
What he did not do was to comment on any of the sloped roman
types already in existence. For example, he could have referred to
the catalogue of 'self-spacing' types issued by the Benton, Waldo

of four compositors for sixty days, I estimate that the saving by

increased composition was equal to the whole cost of the type.

type foundry of Milwaukee about 1886. All the 'italic' faces in it
are actually sloped romans*; one of them was shown in the first
volume of T.L. De Vinne's Practice of Typography, a work
which Morison admired. And closer at hand, frequently to be
seen in the printing of the 1920s, was the De Vinne type (the one

* In an article in The Inland Printer of October 1922 H. L. Bullen called them an
'innovation'; but there were others in existence, usually display types. The
Milwaukee foundry probably made them by necessity, the urgent need to get
their self-spacing types on to the market, and that may have been the reason
why Benton invented his 'Delineator' machine, which enabled him to use one
set of roman drawings to produce, very rapidly, variations of the design, includ¬
ing slanted versions, for the making of the patterns for electrotype matrices.

created by the Central Type Foundry, not the American Linotype -63 -

text face). In my early days in a London composing room it Secondary types:

ranked in popularity with Cheltenham Bold. It could not have italic, bold face

escaped Morison's attention. Its italic was a sloped roman, with

no concession to calligraphic influence. If Morison had paused

and glanced at it, and at the Milwaukee faces, he might have

hesitated to press his sloped roman theory in so uncompromising

a way. It is a little confusing to find, in A Review of Recent
Typography (a revised edition of an earlier work) published the
year after the 'Ideal Italic' article, Morison describing the
Tiemann Kursiv face as a 'handsome letter, flowing as an italic
should be . . .' (my italic). Presumably the passage had not been
revised as thoroughly as the rest of the book. In the last volume of
The Fleuron, issued in 1930, he wrote approvingly of a new suite
of types by Lucian Bernhard who, said Morison, 'is the first type
designer to put into practice the principles laid down in suc¬
cessive articles in The Fleuron as to the relation of roman, sloped
roman and script — the trinity in which, it was forecast, con¬
temporary type faces must henceforth appear'. Bernhard's types
were hardly the best sort of support for the dogma Morison was
asserting, being 'fancy' types only suitable for advertising work.
Morison had tried to put the sloped roman idea into effect in
the italic of the Perpetua type, a new arrival which provided an

important item in the same volume of The Fleuron. The type was
described by Beatrice Warde in an article on the typographic
work of Eric Gill. With more loyalty than accuracy she wrote:
'Perpetua italic . . . interestingly carries out the prediction first
made in the fifth number of The Fleuron that, if the italic is to
develop into a contemporary form, consistency demands that it
should no longer retain the calligraphic peculiarities derived
from a school of writing quite different from that of the roman;
that it must, in fact, become frankly the italic of the given roman,
with only slope, and the modifications necessary to slope, to
distinguish it from the upright version'. But the specimen that
accompanied the article shows that Perpetua italic was not the
uncompromising sloped roman of Morison's 'ideal'. It contained
three significant characters, a, e and g, which were not simply
inclined versions of the roman but calligraphic and 'informal' in