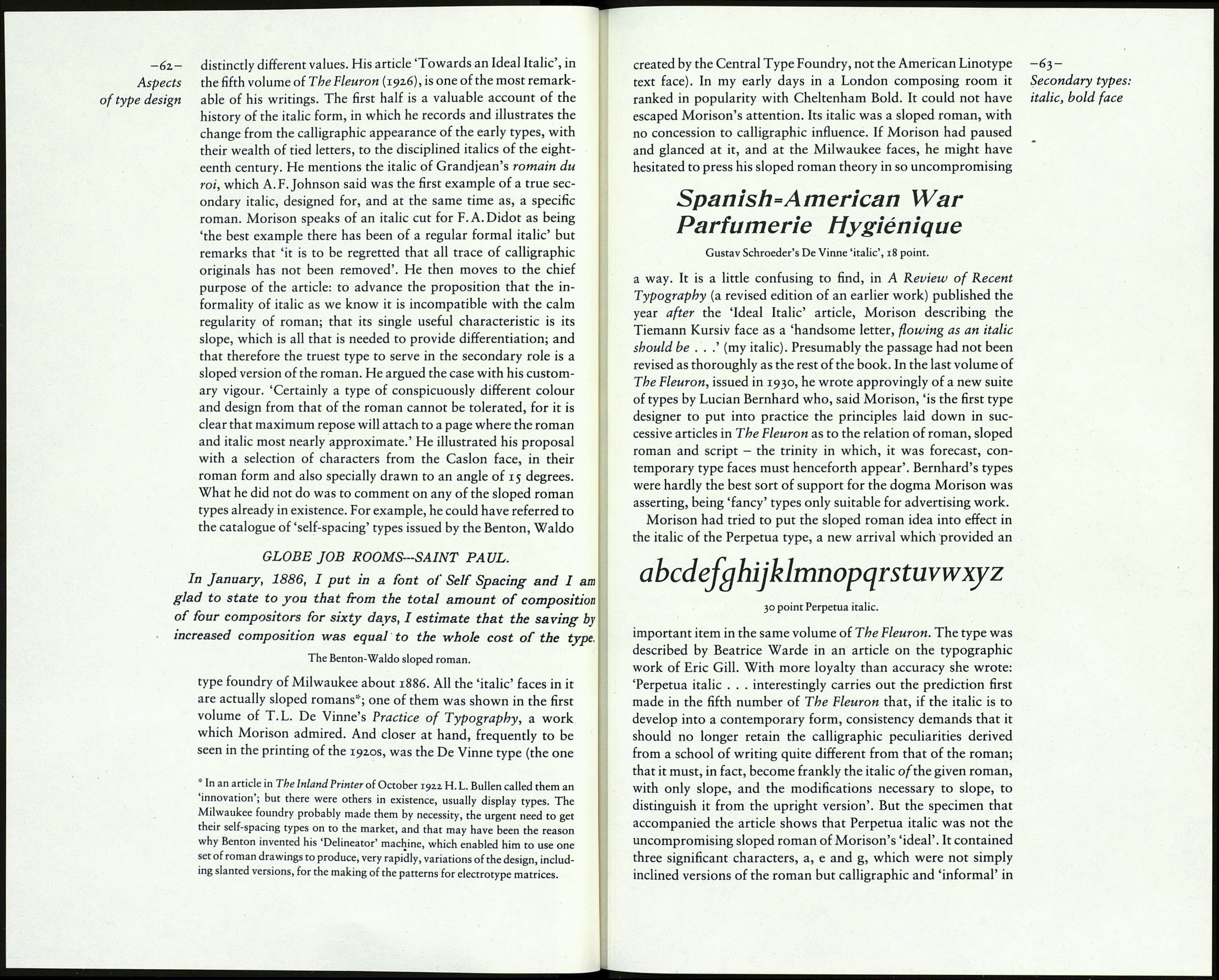 -6o- form and detail may be the chief element of its novelty. But
Aspects designers of text types have to obey the rules; not only because
of type design the aesthetic quality of each letter depends on that discipline, but
because, to quote Updike, 'a test of the excellence of any type is
this - that whatever the combination of letters, no individual
character stands out from the rest - a severe requirement to
which all permanently successful types conform'. How, then, do
designers contrive to create new types that preserve the natural
features of letters and yet are visibly different from others of their
kind?

They may take advantage of the simple variations of struc¬
ture already mentioned - the splayed or vertical legs of M, the
treatment of the foot of b, and so on - but those modest choices
are not themselves sufficient to produce the degree of originality
that is the designer's objective. Distinctive identity comes from
the characteristics that are additional to the structural ones; the
flesh on the skeleton, so to speak. The most important is the
relative thickness of the strokes that form the letters. If the 'thick'
stroke (the second stroke of A, say) is actually not very thick, and
the 'thin' stroke is fairly robust, and that is the case with all the
letters in the face, then the texture of the type will be quite even,
and perhaps monotonous, in the literal sense of the word. But if
the stroke weights are organised the other way, the main strokes
strong, the secondary ones fine-drawn, the contrast between
them will be evident and the effect of the type on the page will be
incisive and possibly dazzling - though not necessarily more
agreeable to the eye. The amount of contrast produces the parti¬
cular texture of a type, and it is the first aspect of a type face that
the student takes note of in the process of identifying it. If the
contrast is not particularly marked the type is not Bodoni and
probably not one of the many other modern faces. If, though,
there is enough contrast to make a moderately clear-cut effect the
type is unlikely to be Pilgrim (Eric Gill's Bunyan), which is a very
even-textured type; and it may not be Baskerville, which in some
printing makes a fairly bland effect. Stroke weight and contrast,
then, help to establish the general class of a type face.

The other feature to which the designer of a text type gives a
good deal of thought is the serif. The length of it is not really at his
choice, because it is determined by the spacing, the 'fitting', of the
characters - a subject to be dealt with a little further on. The
shape of the serif is a matter of choice, and the range of possibility
A medley of serif shapes, is considerable. It can be thick or thin. Its end can be sharply cut

or rounded off. It can be bracketed to the stroke, or unbracketed. -61 -

It can even be wedge-shaped. Secondary types:

Stroke weight and contrast, stress and serif shape are three of italic, bold face
the means by which the designer, combining and permuting
them, achieves the particular individuality of a new type face.

A. F. Johnson described italic as 'a sub-division of roman',
because it derived from a similar source, one of the styles of
writing practised by professional scribes in Rome at the end of
the fifteenth century; this particular style being gracefully narrow
in form and therefore well-suited to the printer's desire to contain
a long classical text within a smallish book. Some of the early
italic types were upright, though informal in character. So 'italic'
refers to place of origin and, more particularly, style; it does not
really mean 'inclined', though that is usually implied when we
use the term nowadays. For the first quarter of the sixteenth
century only the lowercase was italic; the capitals were roman.
And it was not until the middle ofthat century that italic began to
be used as an auxiliary to roman, for words in a foreign language,
for emphasis, for the titles of other works, and so on. 'Secondary'
was Stanley Morison's convenient term for that aspect of the
function of italic. An italic font, then, can perform two roles: as a
text type - in which case the secondary type, for the title of a
quoted journal, say, is the roman; and as an auxiliary in a roman
text.

In Germany, well into this century, italic was not regarded as
essential. It was allowed that differentiation could be indicated
by using roman but letter-spacing the particular words, a custom
familiar to German readers from their experience of fraktur
types, in which an inclined form was not a possibility. Ellic Howe
records that the London Family Herald of 1822 did the same
thing, but for a different reason: its text was composed on a
machine that had no room for a second type. George Bernard
Shaw, who had ideas about typography, specified letter-spaced
roman lowercase for the emphasis in speeches in the early printed
edition of his plays.

The distinguishing features of the traditional italic characters
are, first, a general effect that they run together (which is why
cursive is a more appropriate name for the style), and second, the
slope of the letters, which may be as various as the 25 degrees of
Caslon's italic and the near-upright 4 degrees of Eric Gill's
Joanna italic. Stanley Morison saw those two factors as having