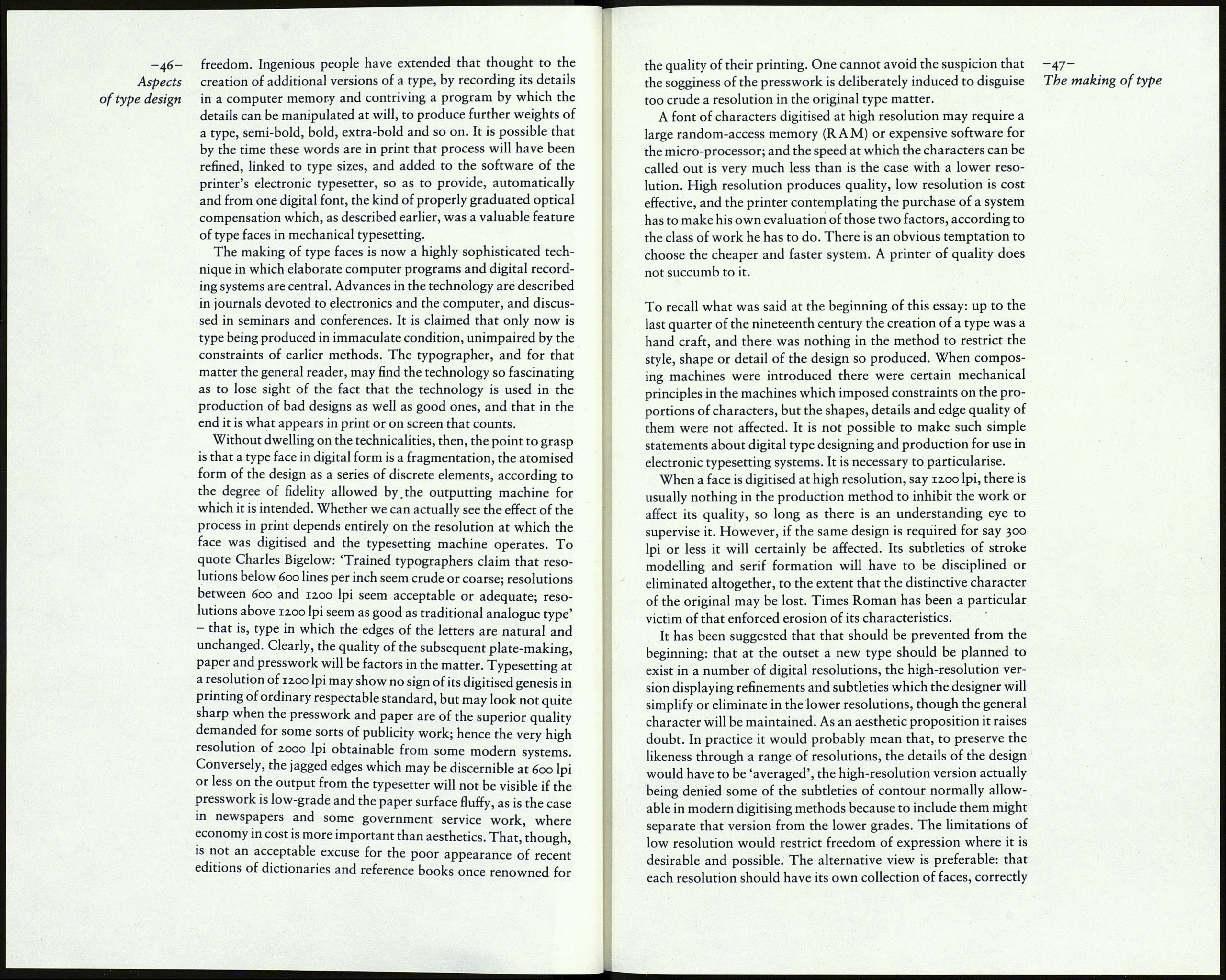 ~44~ and there is much more to be done. When the full alphabet has
Aspects been scanned the result is printed out. The characters must now
of type design be 'edited' by someone with an educated eye. He or she studies
each sample letter carefully and marks out unwanted picture
elements ('pixels') and marks in extra pixels where a curve or
diagonal stroke needs improvement. The edited proof is handed
to an operator who calls each character out of memory and on to
a screen, and then proceeds to key the corrections. When all the
corrected characters are back in font store they have to be tested
at actual print size and, if necessary, revised again. The process is
time-consuming and expensive in inverse proportion to the reso¬
lution. In a type digitised at 1200 lines per inch the em square of a
12 point master contains 40,000 pixels and the contour of the
letter on the sample will be fairly close to that of the original
design. The amount of manual editing and correction will be
much less than for a type digitised at 600 lines per inch, where the
12 point em has 10,000 pixels and letters like a, s and w will show
stepped edges which need a good deal of attention. In. the case of a
type intended for use in a small size, such as a newspaper classi¬
fied advertisement type or a telephone directory face, digitised at
600 lines, the 6 point em has 2,500 pixels: that is, 50 by 50, which
on the proof sheet makes a distinctly gingham effect and needs
much work by the editor and corrector before the array of char¬
acters can safely be put into memory store as the master font
ready for copying for the user. To reduce the labour time and the
amount of data which has to be stored for each character, other
methods have been devised. In one of them the letter is related to
a pattern of lines equivalent to the tracks of the writing spot, and
the beginning and end of each line where it meets the contour of
the letter is plotted and recorded, the writing spot in the typesett¬
ing system 'filling in' the outline at the output stage. The analysis
of the character shape takes more time than sample scanning, but
the method reduces or eliminates editing and correction, and the
memory requirement is much less than in the first method,
though the processing is more elaborate. In another approach the
profile is 'converted' to a sequence of vectors, and their junction
points are recorded; the computer in the typesetter is program¬
med to connect the points and fill in the outline. In all such
methods (and there are others) a good deal of time and effort by
skilful people has to be put in to the editing and correcting of
samples or the analysing of characters for special digitising to
work with special programs, so it is not surprising that more
sophisticated methods of scanning and automatic contour plot¬
ting are in active development.

The intention in editing and correcting a digital sample is, of
course, to repair and restore the character; but the process itself
can be thought of as manipulation - the adding or subtracting of
bits to the edges of letters with, usually, a considerable amount of

A letter in its natural form, as it would appear in
metal type or on the film font or disc in an opto¬
mechanical photo-typesetter.

A simplified representation of the letter when it is
automatically scanned and converted into digital
pixels. Every pixel is stored as a code in the
computer's memory.

(In reality, the pixels, and the lines in the next
example, touch or overlap each other).

The amount of data to be stored is much less
when the letter is 'run-length' scanned, as in this
example. Only the start and stop of each scan line
is recorded - an economical means of storing the
data for large sizes of type, though processing the
data is more complicated.

For even more economical storage the profile of
the letter can be imagined as a series of vectors
(line or arc), their connecting points being selec¬
ted by an operator plotting them into store. A
special routine in the computer's processor con¬
nects the points and fills in the letter shape at the
output stage.

Those are simplified examples of basic methods
of digitising. Computer technology advances so
rapidly that the digitising of characters is now a
highly sophisticated process which, at high reso¬
lution, leaves no trace of itself in the printed
output.