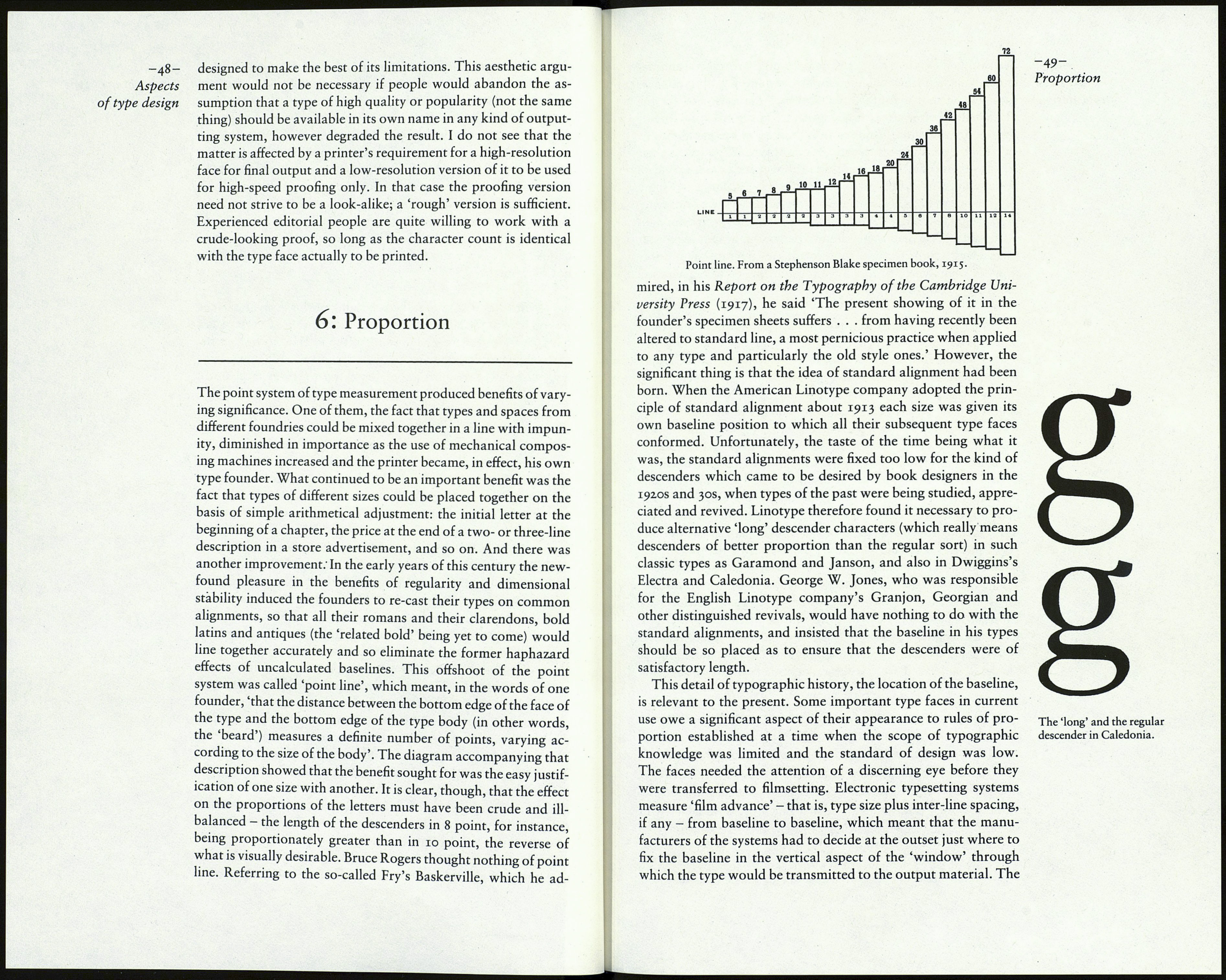 -46- freedom. Ingenious people have extended that thought to the
Aspects creation of additional versions of a type, by recording its details
of type design in a computer memory and contriving a program by which the
details can be manipulated at will, to produce further weights of
a type, semi-bold, bold, extra-bold and so on. It is possible that
by the time these words are in print that process will have been
refined, linked to type sizes, and added to the software of the
printer's electronic typesetter, so as to provide, automatically
and from one digital font, the kind of properly graduated optical
compensation which, as described earlier, was a valuable feature
of type faces in mechanical typesetting.

The making of type faces is now a highly sophisticated tech¬
nique in which elaborate computer programs and digital record¬
ing systems are central. Advances in the technology are described
in journals devoted to electronics and the computer, and discus¬
sed in seminars and conferences. It is claimed that only now is
type being produced in immaculate condition, unimpaired by the
constraints of earlier methods. The typographer, and for that
matter the general reader, may find the technology so fascinating
as to lose sight of the fact that the technology is used in the
production of bad designs as well as good ones, and that in the
end it is what appears in print or on screen that counts.

Without dwelling on the technicalities, then, the point to grasp
is that a type face in digital form is a fragmentation, the atomised
form of the design as a series of discrete elements, according to
the degree of fidelity allowed by,the outputting machine for
which it is intended. Whether we can actually see the effect of the
process in print depends entirely on the resolution at which the
face was digitised and the typesetting machine operates. To
quote Charles Bigelow: 'Trained typographers claim that reso¬
lutions below 600 lines per inch seem crude or coarse; resolutions
between 600 and 1200 lpi seem acceptable or adequate; reso¬
lutions above 1200 lpi seem as good as traditional analogue type'
- that is, type in which the edges of the letters are natural and
unchanged. Clearly, the quality of the subsequent plate-making,
paper and presswork will be factors in the matter. Typesetting at
a resolution of 1200 lpi may show no sign of its digitised genesis in
printing of ordinary respectable standard, but may look not quite
sharp when the presswork and paper are of the superior quality
demanded for some sorts of publicity work; hence the very high
resolution of 2000 lpi obtainable from some modern systems.
Conversely, the jagged edges which may be discernible at 600 lpi
or less on the output from the typesetter will not be visible if the
presswork is low-grade and the paper surface fluffy, as is the case
in newspapers and some government service work, where
economy in cost is more important than aesthetics. That, though,
is not an acceptable excuse for the poor appearance of recent
editions of dictionaries and reference books once renowned for

the quality of their printing. One cannot avoid the suspicion that -47-

too crude a resolution in the original type matter.

A font of characters digitised at high resolution may require a
large random-access memory (RAM) or expensive software for
the micro-processor; and the speed at which the characters can be
called out is very much less than is the case with a lower reso¬
lution. High resolution produces quality, low resolution is cost
effective, and the printer contemplating the purchase of a system
has to make his own evaluation of those two factors, according to
the class of work he has to do. There is an obvious temptation to
choose the cheaper and faster system. A printer of quality does
not succumb to it.

To recall what was said at the beginning of this essay: up to the
last quarter of the nineteenth century the creation of a type was a
hand craft, and there was nothing in the method to restrict the
style, shape or detail of the design so produced. When compos¬
ing machines were introduced there were certain mechanical
principles in the machines which imposed constraints on the pro¬
portions of characters, but the shapes, details and edge quality of
them were not affected. It is not possible to make such simple
statements about digital type designing and production for use in
electronic typesetting systems. It is necessary to particularise.

When a face is digitised at high resolution, say 1200 lpi, there is
usually nothing in the production method to inhibit the work or
affect its quality, so long as there is an understanding eye to
supervise it. However, if the same design is required for say 300
lpi or less it will certainly be affected. Its subtleties of stroke
modelling and serif formation will have to be disciplined or
eliminated altogether, to the extent that the distinctive character
of the original may be lost. Times Roman has been a particular
victim of that enforced erosion of its characteristics.

It has been suggested that that should be prevented from the
beginning: that at the outset a new type should be planned to
exist in a number of digital resolutions, the high-resolution ver¬
sion displaying refinements and subtleties which the designer will
simplify or eliminate in the lower resolutions, though the general
character will be maintained. As an aesthetic proposition it raises
doubt. In practice it would probably mean that, to preserve the
likeness through a range of resolutions, the details of the design
would have to be 'averaged', the high-resolution version actually
being denied some of the subtleties of contour normally allow¬
able in modern digitising methods because to include them might
separate that version from the lower grades. The limitations of
low resolution would restrict freedom of expression where it is
desirable and possible. The alternative view is preferable: that
each resolution should have its own collection of faces, correctly