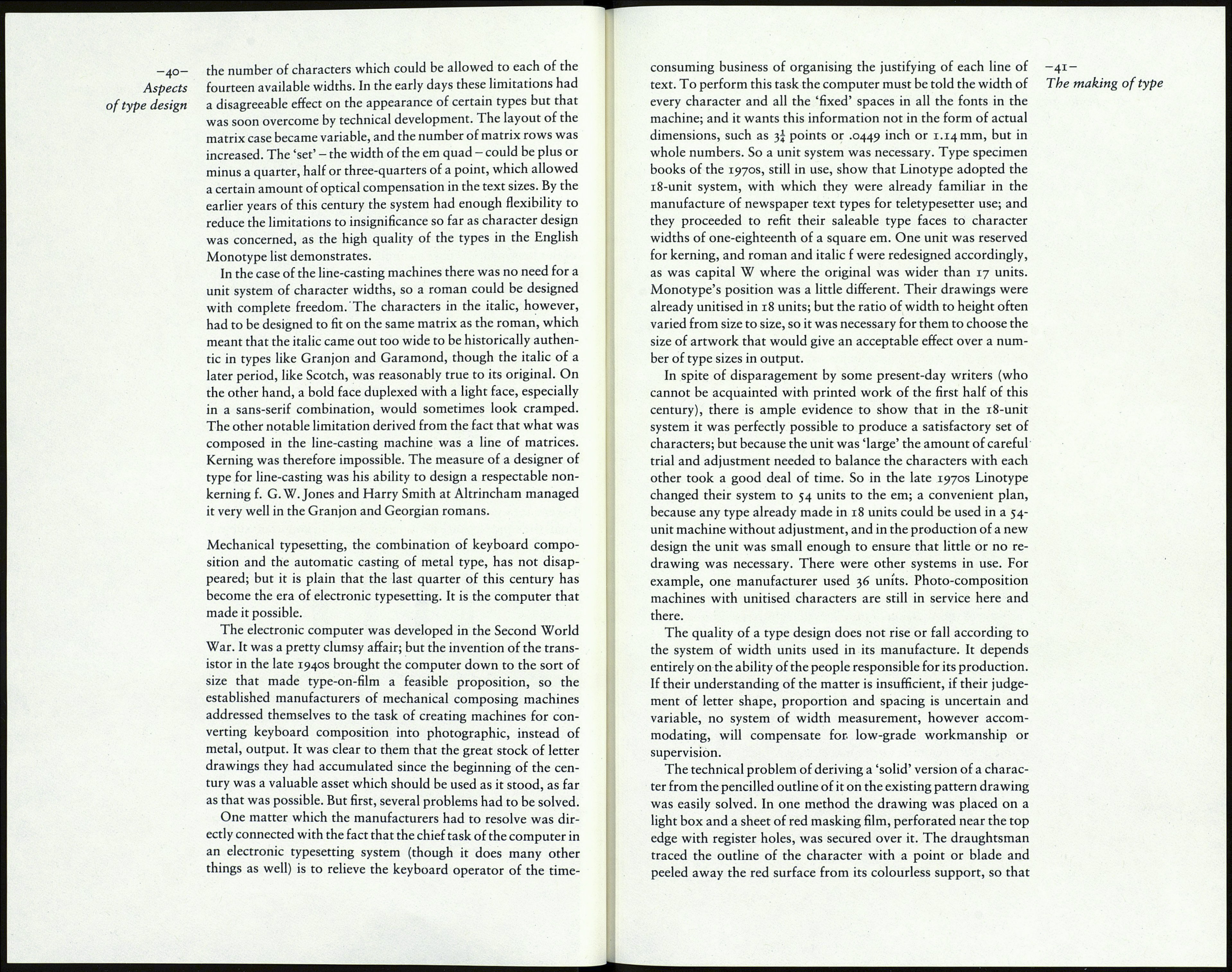 -38- writing in 192z] in type cut by machine is undeniable . . . This
Aspects improvement, I learn, has come to pass through a more sym-
oftype design pathetic and subtle manipulation of the machine itself, and by
modification of rules by the eye of the workman who operates it.'
Jan van Krimpen, too, made much of 'the problems' of mech¬
anical punch-cutting in his Letter to Philip Hofer (a sadly
muddled work whose chief merit is that it caused John Dreyfus to
write a very interesting commentary on it). Updike and other
critics disapproved of the 'mechanising' of letter forms, by which
they meant the eliminating of 'the slight irregularities which the
human eye and hand always leave in manual work', which Van
Krimpen thought were 'an important element of the charm of
hand-cut type'. It may be that it was not so much the accidental
imperfections of execution that these critics admired in the types
of the masters of the past as the subtleties of style which the
designer-punch-cutters had deliberately introduced into their
faces. In their comments they show no sign that they recognised
the different kinds of punch-cutter - though one of them, Bruce
Rogers, had a sense of that when, speaking of his Montaigne
type, he said, '. . . partly through the conventional training
of the punch-cutter (who was nevertheless a most admirable
and skilful workman), the desired quality was only partially
attained'. And it seems, from the way the critics expressed them¬
selves, that they had an imperfect understanding of the way type
designs for mechanical composition were produced. The work¬
men who operated the pattern-making and punch-cutting mach¬
ines did not, because they could not, alter the letter forms in any
way. That was the province of the drawing office, where, from
a projection of a character on a type proof or from a designer's
original drawing, the 'ten-inch' drawing was produced. Insensit-
ivity in that area was not unknown. In 192.1 Goudy had cause to
complain about the treatment of his Garamont design. 'Draw¬
ings like mine, which were made free-hand, were not the sort
usually worked from at the [American] Monotype company, so
there was a constant fight to see that the workmen did not
"correct" what seemed to them to be bad drawing on my part. If I
intentionally gave a letter an inclination of one degree, they
straightened it up. My serifs, which had a definite shape, were
changed to meet their own ideas, since "they had always made
them that way".' But if the work of the type drawing office was
under the supervision of someone with a good eye for a letter, as
was the case, for example, in the Linotype companies and in the
English Monotype office, the letter drawings would show either a
faithful replica of the original or a modification of it in accor¬
dance with a premeditated view of the desired result. There is
ample evidence of the care that was given to the reproduction of
designs, old and new, to preserve the character of the face and to
make it suitable for the requirements of modern printing. For

example, when sending a proof of Linotype's version of the so- -39-

you so much with this proposition, but I am so anxious to have

the Linotype face worthy of its name. If I cannot succeed in

satisfying myself that our interpretation of Janson will be worthy

of the honored name it bears, we shall not hesitate a moment to

scrap the whole work and forget it.' And there was the solicitous

handling of Granjon and other revivals by Harry Smith at Altrin-

of the Janson face. Those examples could be multiplied. Stanley

Types, 'Virtue went out with the hand-cutter when the mechanic

came in with his pantograph and the rest of the gear.'

However, there were certain aspects of type face manufacture for
mechanical composition which potentially had a bearing on the
appearance of type. One of them was due to the punch-cutting
machine itself. Since it worked on the pantographic principle and
had the facility of fine adjustment it could produce several sizes of
punches from a single pattern. In practice, though, the manu¬
facturers had the sense to see that restraint was needed if their
type faces were to compare favourably with foundry-made types,
and they accepted the fact that they must continue the traditional
practice of 'optical compensation': that is, the modifying of the
lowercase x-height and letter widths to maintain legibility in
small sizes and elegance in the larger ones - an important subject,
to be enlarged upon in a following essay.

Optical compensation. A letter from the 12 and 8 point sizes
of Caledonia, enlarged to the same type size.

There were constraints in the Monotype system which at first
sight seem severe. The system had two parts: a keyboard whose
output was a ribbon of perforated paper, the perforations repres¬
enting codes for the characters and for the justifying of the lines;
and a casting machine, driven by the ribbon, which contained a
metal pot and a die-case - that is, a frame holding the matrices in
rows, an equal number in each row. The first constraint was the
fact that the width of every character, including its own side
spaces, had to be equal to a multiple of one-eighteenth of the
width of a selected em quad, five eighteenths being the minimum,
eighteen the maximum. The second constraint was the limit on