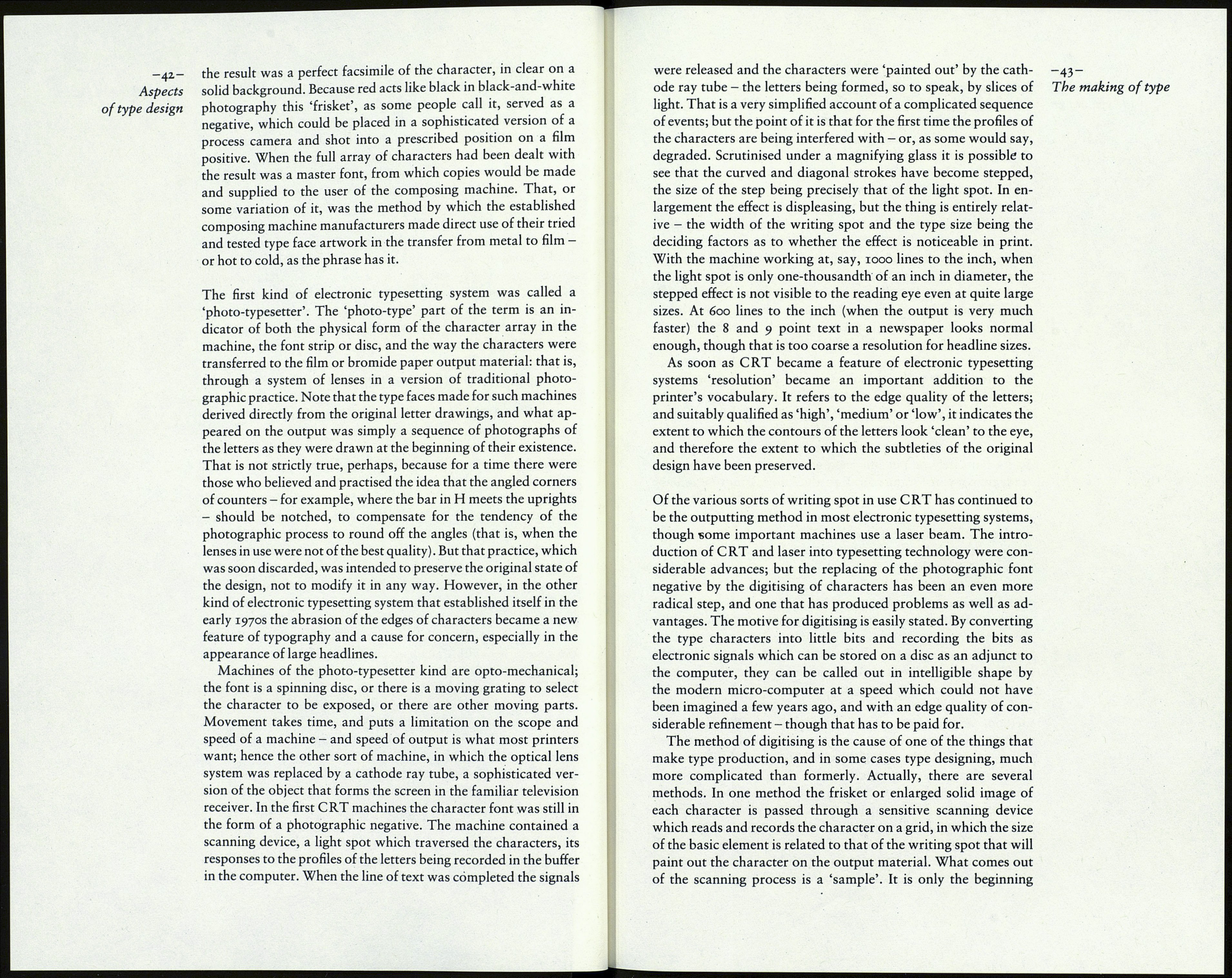 -40- the number of characters which could be allowed to each of the
Aspects fourteen available widths. In the early days these limitations had
of type design a disagreeable effect on the appearance of certain types but that
was soon overcome by technical development. The layout of the
matrix case became variable, and the number of matrix rows was
increased. The 'set' - the width of the em quad - could be plus or
minus a quarter, half or three-quarters of a point, which allowed
a certain amount of optical compensation in the text sizes. By the
earlier years of this century the system had enough flexibility to
reduce the limitations to insignificance so far as character design
was concerned, as the high quality of the types in the English
Monotype list demonstrates.

In the case of the line-casting machines there was no need for a
unit system of character widths, so a roman could be designed
with complete freedom. The characters in the italic, however,
had to be designed to fit on the same matrix as the roman, which
meant that the italic came out too wide to be historically authen¬
tic in types like Granjon and Garamond, though the italic of a
later period, like Scotch, was reasonably true to its original. On
the other hand, a bold face duplexed with a light face, especially
in a sans-serif combination, would sometimes look cramped.
The other notable limitation derived from the fact that what was
composed in the line-casting machine was a line of matrices.
Kerning was therefore impossible. The measure of a designer of
type for line-casting was his ability to design a respectable non-
kerning f. G.W.Jones and Harry Smith at Altrincham managed
it very well in the Granjon and Georgian romans.

Mechanical typesetting, the combination of keyboard compo¬
sition and the automatic casting of metal type, has not disap¬
peared; but it is plain that the last quarter of this century has
become the era of electronic typesetting. It is the computer that
made it possible.

The electronic computer was developed in the Second World
War. It was a pretty clumsy affair; but the invention of the trans¬
istor in the late 1940s brought the computer down to the sort of
size that made type-on-film a feasible proposition, so the
established manufacturers of mechanical composing machines
addressed themselves to the task of creating machines for con¬
verting keyboard composition into photographic, instead of
metal, output. It was clear to them that the great stock of letter
drawings they had accumulated since the beginning of the cen¬
tury was a valuable asset which should be used as it stood, as far
as that was possible. But first, several problems had to be solved.

consuming business of organising the justifying of each line of -41-
text. To perform this task the computer must be told the width of The making of type
every character and all the 'fixed' spaces in all the fonts in the
machine; and it wants this information not in the form of actual
dimensions, such as 3I points or .0449 inch or 1.14 mm, but in
whole numbers. So a unit system was necessary. Type specimen
books of the 1970s, still in use, show that Linotype adopted the
18-unit system, with which they were already familiar in the
manufacture of newspaper text types for teletypesetter use; and
they proceeded to refit their saleable type faces to character
widths of one-eighteenth of a square em. One unit was reserved
for kerning, and roman and italic f were redesigned accordingly,
as was capital W where the original was wider than 17 units.
Monotype's position was a little different. Their drawings were
already unitised in 18 units; but the ratio of width to height often
varied from size to size, so it was necessary for them to choose the
size of artwork that would give an acceptable effect over a num¬
ber of type sizes in output.

In spite of disparagement by some present-day writers (who
cannot be acquainted with printed work of the first half of this
century), there is ample evidence to show that in the 18-unit
system it was perfectly possible to produce a satisfactory set of
characters; but because the unit was 'large' the amount of careful
trial and adjustment needed to balance the characters with each
other took a good deal of time. So in the late 1970s Linotype
changed their system to 54 units to the em; a convenient plan,
because any type already made in 18 units could be used in a 54-
unit machine without adjustment, and in the production of a new
design the unit was small enough to ensure that little or no re¬
drawing was necessary. There were other systems in use. For
example, one manufacturer used 36 units. Photo-composition
machines with unitised characters are still in service here and
there.

The quality of a type design does not rise or fall according to
the system of width units used in its manufacture. It depends
entirely on the ability of the people responsible for its production.
If their understanding of the matter is insufficient, if their judge¬
ment of letter shape, proportion and spacing is uncertain and
variable, no system of width measurement, however accom¬
modating, will compensate for. low-grade workmanship or
supervision.

The technical problem of deriving a 'solid' version of a charac¬
ter from the pencilled outline of it on the existing pattern drawing
was easily solved. In one method the drawing was placed on a
light box and a sheet of red masking film, perforated near the top
edge with register holes, was secured over it. The draughtsman
traced the outline of the character with a point or blade and
peeled away the red surface from its colourless support, so that