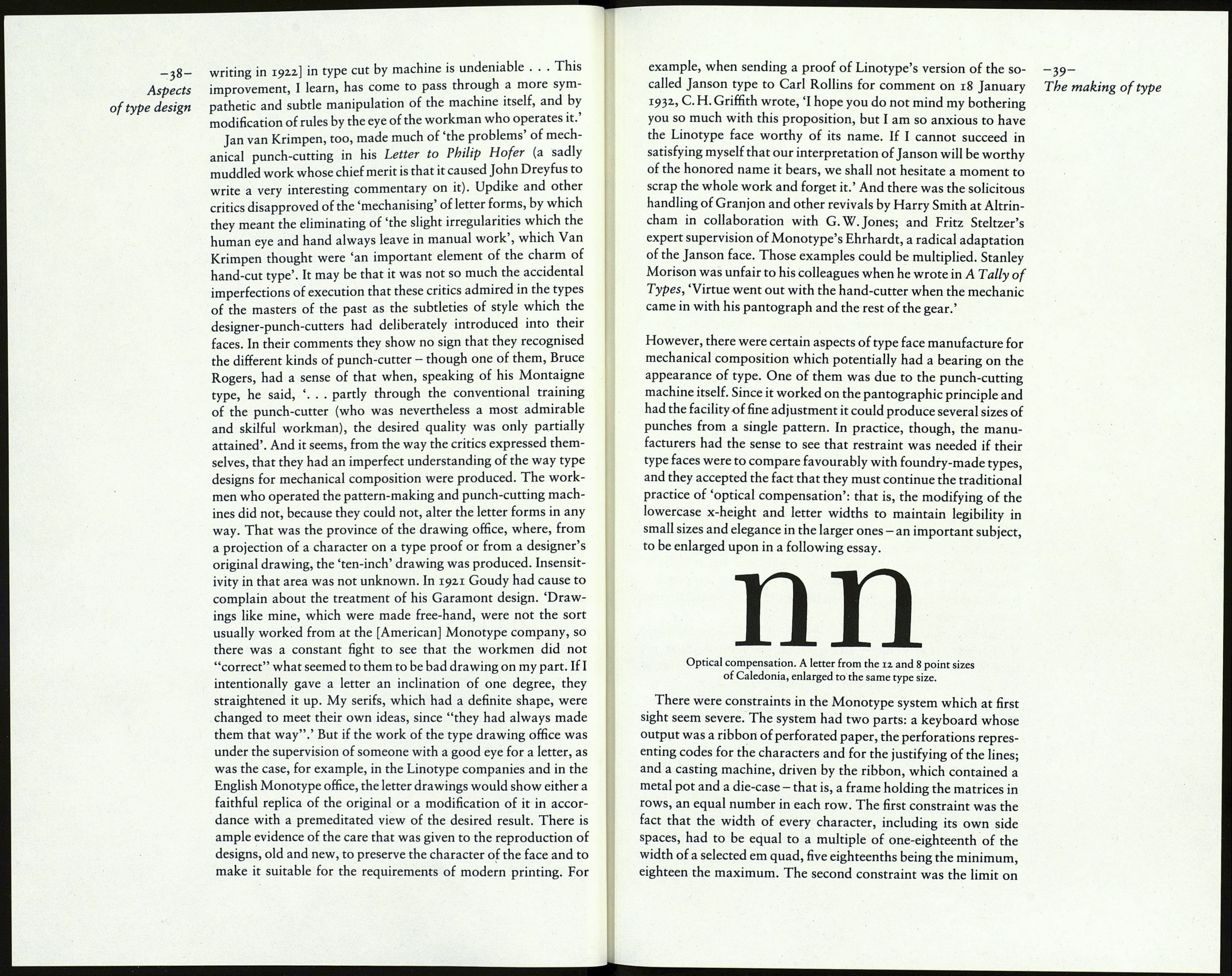 to the creation of types in which all the characters and spaces
would be on one or other of nine widths, instead of the many
random widths of traditional type founding. This early unit sy¬
stem - basically the same as the system later employed by Talbot
Lanston in his Monotype machine - was intended to expedite the
work of the compositor; one of them, testing the type, admiringly
called the system 'self-spacing'. To assist in the production of the
type faces needed for the new system Benton invented a machine
which was soon to have unexpected significance. Bullen called it
a punch-cutting machine, but by his own description it was not
intended to cut punches but simulations of type, in 'soft' type
metal, from which electrotype matrices were grown. The
machine was patented in 1885. Waldo mentioned the machine
during his efforts to sell self-spacing type to the New York
Tribune and in turn Whitelaw Reid of that journal told Philip
Dodge about it. Dodge had assumed responsibility for making
the Linotype machine a commercial proposition, but knew that
one of the obstacles was that the cutting of punches by hand was
far too slow and the breakage rate too high. Dodge hurried to
Milwaukee and persuaded Benton to try his machine in the cut¬
ting of a steel punch. It worked. A leasing agreement was arran¬
ged, and mechanical composition took a long step towards
viability.

Mechanical punch-cutting, one of the salient developments in
the history of printing, played a centrol role in the rapid advance¬
ment of both the Linotype and Monotype composing systems in
the early years of the present century. Actually, two machines
were involved. One of them was a version of the pantographic

routing machine which for many years had been used in the -37-
making of wooden type for poster printing. A drawing of the The making of type
character, scaled up to about ten inches, was placed at one end of
the machine's table. At the other end a wax-coated metal plate
was locked in position. The operator carefully tracked the fol¬
lower point along the lines of the drawing, and the cutter at the
end of the pantograph arm imitated the movement, in reduction,
on the waxed plate. The surplus wax being removed, the plate
was electrolytically coated with copper. The copper shell was
backed with lead, and the result was an accurate representation
of the character, about one-quarter the size of the drawing, and in
firm relief; it was called a pattern, or former. That was the
original method, and the one always used, with technical refine¬
ments, by Monotype. The American Linotype company, using
the same kind of tool, at first cut the pattern character in plaster
and from that made a stereotype in metal; but later they adopted
the process developed by the English Linotype company, by
which the character was cut through the upper one of two metal
plates, which were then riveted together before the surplus metal
was removed. The differences in the method are not important.
The significant thing is that for the first time the type design now
existed on paper in the form of accurate drawings - because type
making had changed from a manual craft to a species of precision
engineering.

The punch-cutting machine itself also worked on a version of
the pantographic principle. A heavy upright frame held the table
on which the pattern was secured. The follower arm was
mounted vertically above the table. At the top of the arm was a
lathe head containing a revolving cutter. The steel punch blank
was fixed in a chuck adjacent to the cutter. The operator attached
a circular follower to the arm and tracked it around the profile of
the character on the pattern, exchanging the follower for a smal¬
ler one after each pass. The motion was exactly imitated in
miniature by the cutter on the punch blank, so that the character
took shape gradually. The operator would check the progress of
the work from time to time, and when the punch was completed
it would be checked in a projectorscope against the original
drawing. If it was approved it was then hardened, and was then
ready for use in the matrix stamping press - at which point one of
the differences between the Monotype and Linotype systems
manifests itself, the Monotype font requiring only one matrix of

■ the character, the Linotype font needing up to twenty.
The traditional punch-cutter was quite absent from this scene
- to the regret of some writers on type design. Updike, for in¬
stance: T have sometimes questioned whether a machine can be
so managed that it will ever produce those fine and imperceptible
qualities of design given to it by the hand of a clever type-
cutter . . . That there has been an improvement of late [he was