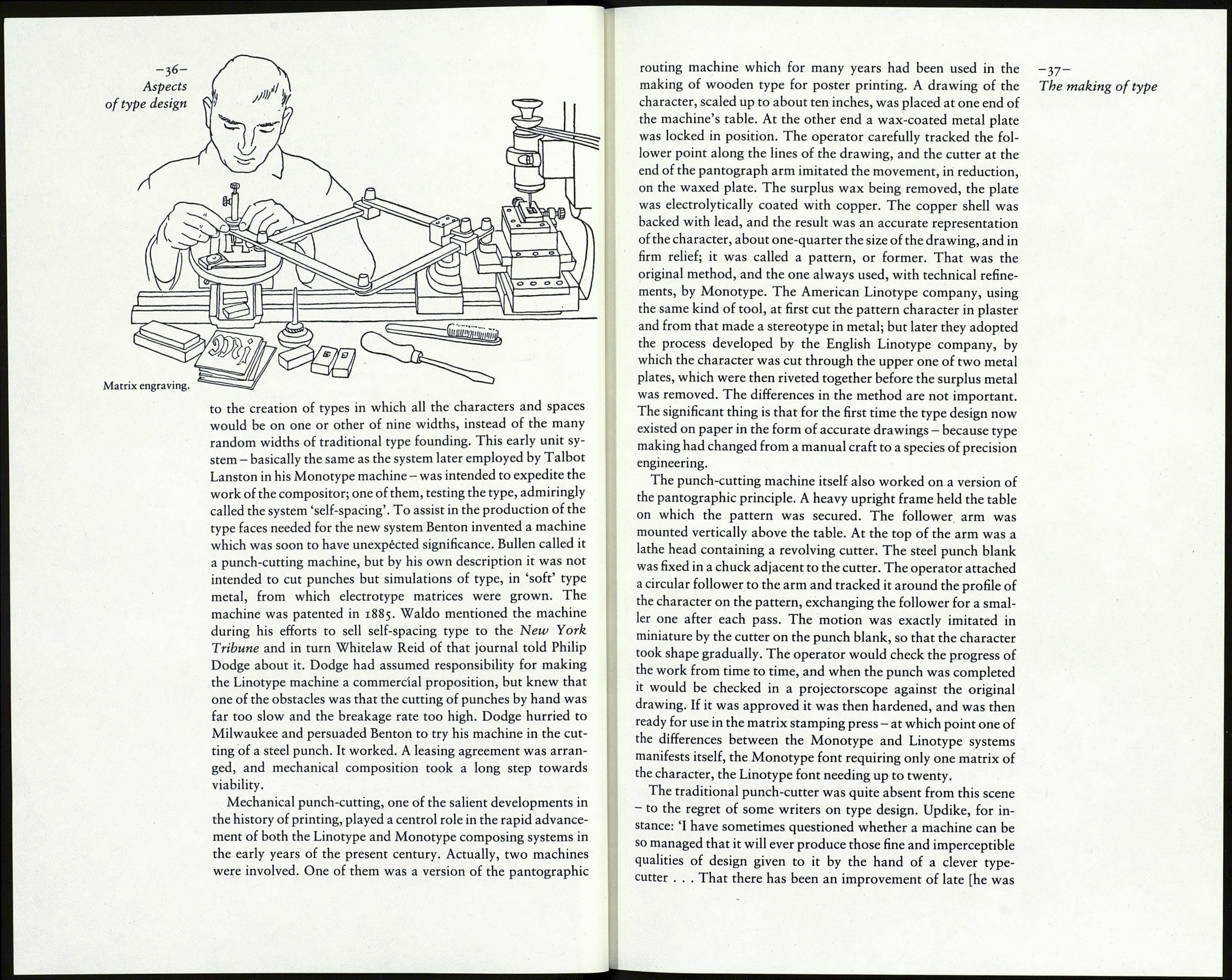 by kind permission of

other crafts.) When a sufficient number of castings had been done
the pieces of type were assembled in line, their feet cleared of
extraneous metal and identifying nicks were grooved into the
shank. Note that in this series of tasks the punch, so laboriously
produced, was not an end but the means to an end: the matrix
was the indispensible item.

That was the method of type making used for types as diverse
as the textura of Gutenberg's work, the romans made for Aldus
(one of them we know today as Bembo), Robert Granjon's
remarkably elaborate Greek type, his Civilité, the delicately
complicated Union Pearl of about 1700, Firmin Didot's austere
modern face, and many of the nineteenth century 'fantasy' types
- to mention only enough to show what a variety of design was
achieved by the skill of the punch-cutter during the long period
when printing was done by hand and eye, and not by any sort of
machine. It is clear that, as a means of creating a letter, the act of
shaping a punch had no particular influence, and enforced no
limitation, on the style or shape or detail of the character. Letters
could be any width, angles and serif ends could be as sharp as
desired (because the metal was being cut away, not incised), and a
modification to the mould allowed letters to be provided with
kerns; in short, the skilled punch-cutter had fewer limitations in
his creative work than was later the case in the making of type
faces for mechanical composition, as we shall see.

It was the punch-cutter himself who, if he possessed artistic
sense as well as manual skill, was capable of influencing the
appearance of a type - indeed, of creating a new effect altogether.

Thus the types cast from the matrices struck from the punches cut - 3 5 -
by Claude Garamond owe their distinctive appearance to his The making of type
creative sense, his vision of the style of face he wanted to produce.
The same can be said of Kisand Caslon, Fournier and Firmin
Didot, and many others. They were designer punch-cutters.
Baskerville is a different case. He had the vision; but his punches
were cut for him by John Handy, who can be called an interpre¬
tive punch-cutter. There have been others such: Edward Prince,
who brought into being the ideas of Morris and Cobden-
Sanderson; Charles Malin, who was engaged by Stanley Morison
to cut punches of Gill's Perpetua design before Monotype took
up the work; and P.H.Raedisch, who interpreted the designs of
Jan van Krimpen. Most of the men who worked for the
nineteenth-century American foundries were punch-cutters of
the interpretive sort, able to receive a sketch or note for a new
type and give its characters style and coherence. As William Loy
wrote in 1898, 'Very few engravers of type faces work from their
own designs; indeed, the qualifications are so dissimilar that one
would hardly expect to find them in the same individual.' No
doubt there was a third class of punch-cutter, the artisan kind,
employed not for any ability as designer or interpreter but for
manual skill and accuracy — which must have been considerable,
to judge by the 'finish' of the faces shown in the later nineteenth-
century type founders' catalogues. The seven or eight punch-
cutters in the Mergenthaler plant in 1890 were probably of that
sort - their task being to cut punches for newspaper text types in
imitation of existing founders' faces, but more particularly, to
replace the punches which broke so frequently.

In type founding as elsewhere the invention of steam power
made mechanisation possible. A machine for the rapid casting of
type was developed early in the nineteenth century. Towards the
end of that period some type founders adopted, as an alternative
to punch-cutting and matrix striking, the engraving of the char¬
acter directly into the matrix blank - a method only suitable for
fairly large sizes and for designs in which rounded angles, caused
by the powered rotating cutting tool, were tolerable. (More of
this later, when the work of Frederic Goudy is examined.) Yet
another method, the electrotype matrix 'grown' from a pattern
cut in 'soft' metal, was an easy way of producing a new type face,
and one of the reasons why the last quarter of the nineteenth
century was such a prolific period. The most significant event,
though, was the mechanising of punch-cutting. It removed an
obstacle to the progress of mechanical typesetting, and was
thereby the indirect cause of the decline of type founding as a
trade.

The unwitting instigators of the event were Linn Boyd Benton
and his partner R.V.Waldo. They conducted the Northwestern
Type Foundry in Milwaukee, where Benton devoted his energy