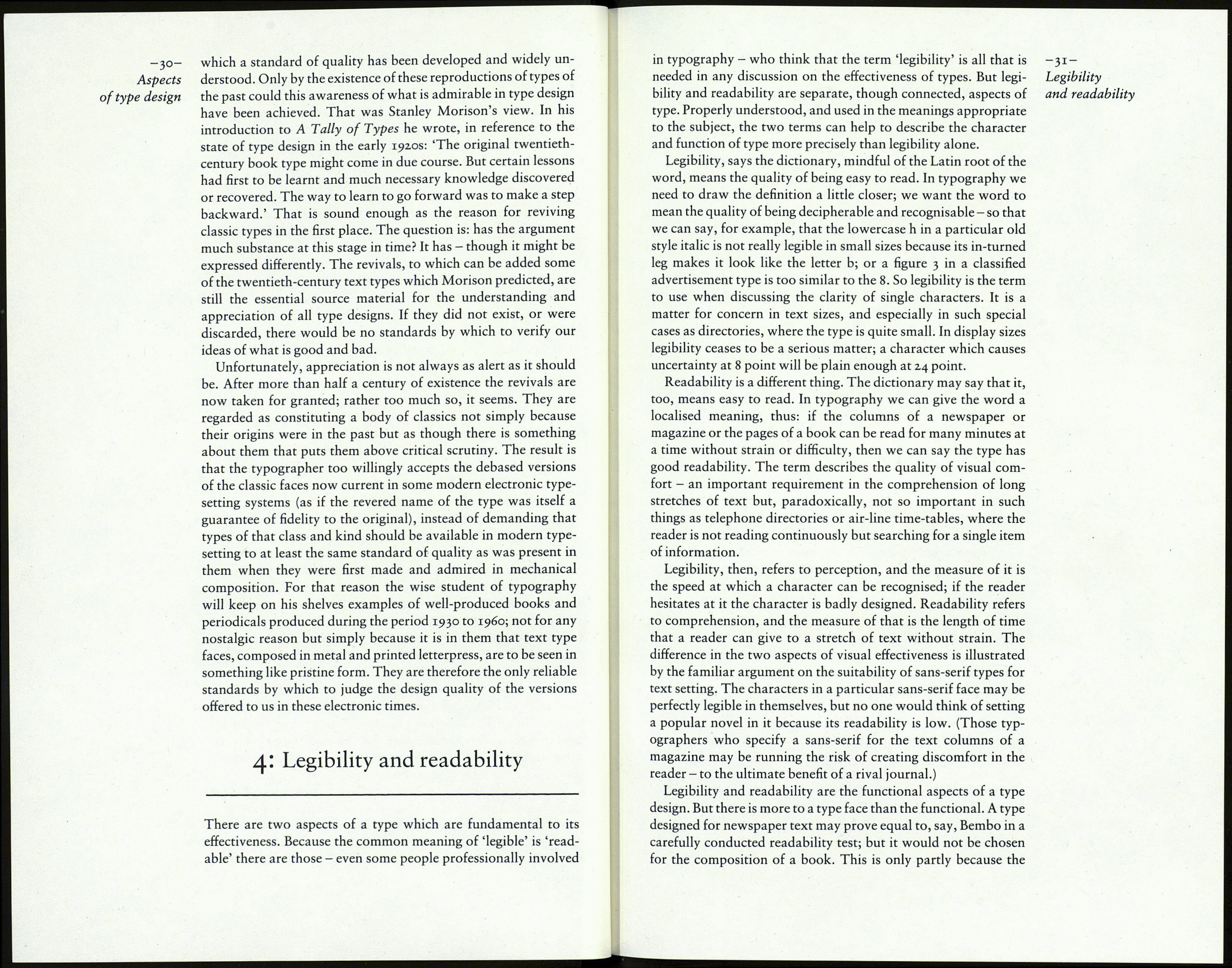 The fat face turned inside out. The full point
defied the treatment.

said, a maltreated egyptian. I think it was an exercise in ingenuity
by a lively-minded person who, knowing that the 'fat face' -
which was the modern letter that had, as the song says, gone
about as far as it could go - had astonished the printers, decided
that the shock could be repeated if all the characteristics of the fat
face were reversed - the thick strokes made thin, the thin strokes
and serifs made thick, tapers inverted, and so on. The Italian face
was г jeu d'esprit, not meant to be judged in conventional aesthe¬
tic terms. Even more ingenious are the recent Block Up and
Bombere faces, which exploit the illusion of an extra dimension,

and Stop, which is more subtle than it seems at first sight. But
such types are (literally) not typical. Most publicity types stay
closer to familiar letter forms, though novelty is usually their
chief raison d'être. They are meant for the come-on line in adver¬
tising work or the brand name on a package, or in the multitude
of items generally called ephemeral printing. Such types have no
certainty of a long life, because novelty is by definition itself
ephemeral. While they last they serve a turn, adding a visual fillip
to print just as the rustic, ribbon and bamboo types did a hundred
years ago. Some of these display types are skilfully designed.
Others are heavily-promoted but dismal souvenirs of the tail-end
of the nineteenth century, which do little credit to those who use
them and none to those who revived them. Others again are
inexcusably clumsy, and only see the light of day because their
promoters know that there are advertising typographers for
whom it is enough that a type is new. (The temptation to include
here a rogues' gallery of such types has been resisted.) Whatever
their merits, publicity types are of little help to anyone attempt¬
ing to acquire a sound knowledge of typographic letter forms and
to recognise the criteria by which they should be judged. For that

purpose it is necessary to concentrate on a different area: to study
those types which from their beginning were intended to be used
in the composition of text matter - the io or n point of the
typical book, or the 8 or 9 point of the magazine or newspaper; in
other words, types designed for long stretches of reading, which
prove their merits by subtleties of detail, not by novelties of form
or flourish.

At first thought the obvious text faces to describe and analyse
would seem to be the revivals and re-modellings of the types now
regarded as the great classics of the past: Bembo, Granjon,
Ehrhardt, Caslon, Fournier, Baskerville, to name a few. Cert¬
ainly the student ought to make a careful study of the types of the
past, in their original form through the writings of Updike,
Johnson, Morison and Nesbitt, and also in the revivals and
adaptations produced in the 1920s and 30s-cautiously keeping it
in mind that type faces have not always been named accurately
and that there are important differences between, say, Italian Old
Style and an Aldine face, the true and false Garamonds, the
original Caslon and Baskerville and the 'regulated' versions of
them. However, the history and characteristics of those distin¬
guished revivals will not be rehearsed in these pages; not only
because that has been done sufficiently elsewhere, notably in
Stanley Morison's A Tally of Types, but because those types
were first created when printing was a craft, not an industry,
when the powered press and machine-made paper were yet to
come, and type faces were not so much designed as developed
from a previous model. For those reasons, then, and particularly
because type designing, as a professional activity outside the type
foundry, began just about the beginning of this century, the types
to be discussed in detail in the second part of this book will be the
creations of some notable twentieth-century designers who took
an individual view of type and recorded their thoughts about it.
To continue for a moment, though, about the revived classics:
typographers seem to have an ambivalent attitude towards them.
Like other design-conscious people they appreciate buildings,
furniture and other objects made in the past but, rightly, frown at
reproductions of them: neo-Georgian houses, Jacobean-style in¬
teriors, book club editions in pseudo-Renaissance bindings, and
so on. They decidedly want things made now to show the fact,
and not pretend otherwise. Yet they have a different attitude
towards text types - willingly, even preferably, setting a modern
novel or journal in a type that was created several centuries ago.
This is a contradiction, no doubt; but it is a necessary one. There
is an important reason why the revivals should continue to be
used. On the basis of practical experience of them and on what
has been written about them during the past sixty years it has
been possible to form a corpus of ideas about letter design from