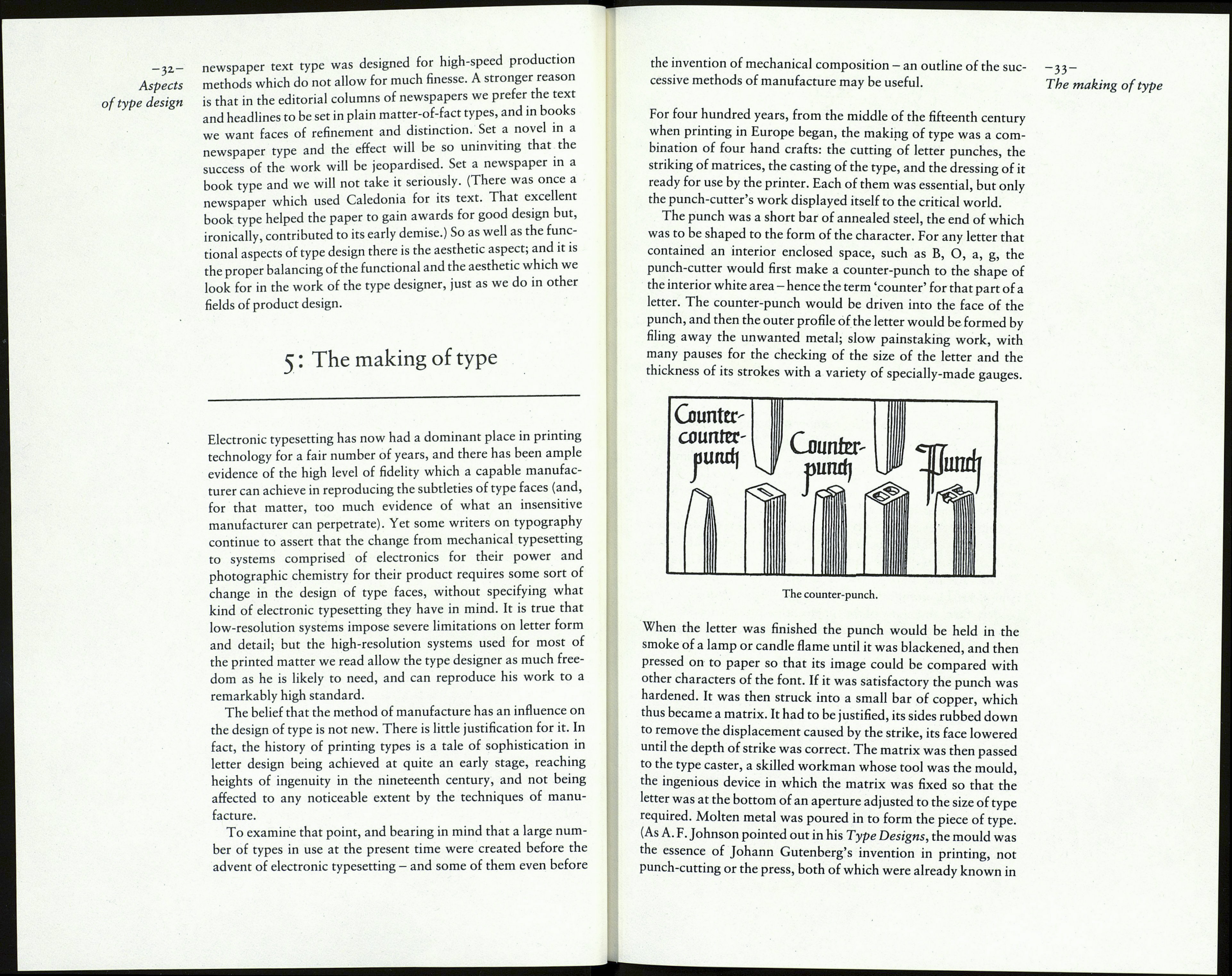 -Зо- which a standard of quality has been developed and widely un-
Aspects derstood. Only by the existence of these reproductions of types of
of type design the past could this awareness of what is admirable in type design
have been achieved. That was Stanley Morison's view. In his
introduction to A Tally of Types he wrote, in reference to the
state of type design in the early 1920s: 'The original twentieth-
century book type might come in due course. But certain lessons
had first to be learnt and much necessary knowledge discovered
or recovered. The way to learn to go forward was to make a step
backward.' That is sound enough as the reason for reviving
classic types in the first place. The question is: has the argument
much substance at this stage in time? It has - though it might be
expressed differently. The revivals, to which can be added some
of the twentieth-century text types which Morison predicted, are
still the essential source material for the understanding and
appreciation of all type designs. If they did not exist, or were
discarded, there would be no standards by which to verify our
ideas of what is good and bad.

Unfortunately, appreciation is not always as alert as it should
be. After more than half a century of existence the revivals are
now taken for granted; rather too much so, it seems. They are
regarded as constituting a body of classics not simply because
their origins were in the past but as though there is something
about them that puts them above critical scrutiny. The result is
that the typographer too willingly accepts the debased versions
of the classic faces now current in some modern electronic type¬
setting systems (as if the revered name of the type was itself a
guarantee of fidelity to the original), instead of demanding that
types of that class and kind should be available in modern type¬
setting to at least the same standard of quality as was present in
them when they were first made and admired in mechanical
composition. For that reason the wise student of typography
will keep on his shelves examples of well-produced books and
periodicals produced during the period 1930 to i960; not for any
nostalgic reason but simply because it is in them that text type
faces, composed in metal and printed letterpress, are to be seen in
something like pristine form. They are therefore the only reliable
standards by which to judge the design quality of the versions
offered to us in these electronic times.

There are two aspects of a type which are fundamental to its
effectiveness. Because the common meaning of 'legible' is 'read¬
able' there are those - even some people professionally involved

in typography - who think that the term 'legibility' is all that is -31-
needed in any discussion on the effectiveness of types. But legi- Legibility
bility and readability are separate, though connected, aspects of and readability
type. Properly understood, and used in the meanings appropriate
to the subject, the two terms can help to describe the character
and function of type more precisely than legibility alone.

Legibility, says the dictionary, mindful of the Latin root of the
word, means the quality of being easy to read. In typography we
need to draw the definition a little closer; we want the word to
mean the quality of being decipherable and recognisable - so that
we can say, for example, that the lowercase h in a particular old
style italic is not really legible in small sizes because its in-turned
leg makes it look like the letter b; or a figure 3 in a classified
advertisement type is too similar to the 8. So legibility is the term
to use when discussing the clarity of single characters. It is a
matter for concern in text sizes, and especially in such special
cases as directories, where the type is quite small. In display sizes
legibility ceases to be a serious matter; a character which causes
uncertainty at 8 point will be plain enough at 24 point.

Readability is a different thing. The dictionary may say that it,
too, means easy to read. In typography we can give the word a
localised meaning, thus: if the columns of a newspaper or
magazine or the pages of a book can be read for many minutes at
a time without strain or difficulty, then we can say the type has
good readability. The term describes the quality of visual com¬
fort - an important requirement in the comprehension of long
stretches of text but, paradoxically, not so important in such
things as telephone directories or air-line time-tables, where the
reader is not reading continuously but searching for a single item
of information.

Legibility, then, refers to perception, and the measure of it is
the speed at which a character can be recognised; if the reader
hesitates at it the character is badly designed. Readability refers
to comprehension, and the measure of that is the length of time
that a reader can give to a stretch of text without strain. The
difference in the two aspects of visual effectiveness is illustrated
by the familiar argument on the suitability of sans-serif types for
text setting. The characters in a particular sans-serif face may be
perfectly legible in themselves, but no one would think of setting
a popular novel in it because its readability is low. (Those typ¬
ographers who specify a sans-serif for the text columns of a
magazine may be running the risk of creating discomfort in the
reader - to the ultimate benefit of a rival journal.)

Legibility and readability are the functional aspects of a type
design. But there is more to a type face than the functional. A type
designed for newspaper text may prove equal to, say, Bembo in a
carefully conducted readability test; but it would not be chosen
for the composition of a book. This is only partly because the