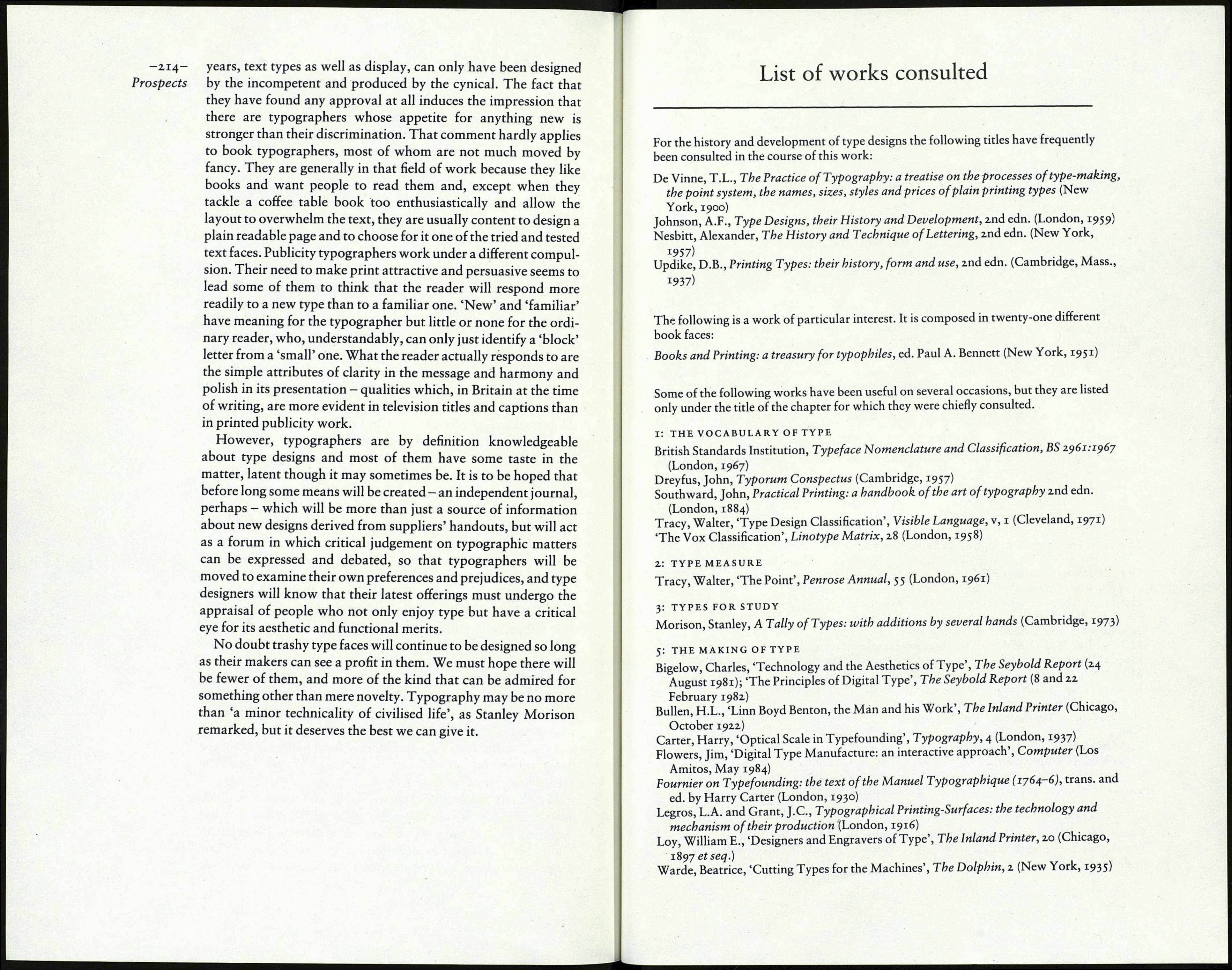 The paperless office is a reality. Many people have put away the -213-
blotter and the stapler, and spend their working hours in front of Prospects
a desk-top screen, contemplating letters of the alphabet made of
dots of light - an absorbing and valuable experience, no doubt,
but not one to induce an admiration for letter forms per se. The
paperless society is talked about; but, thankfully, it is still only a
gleam in the eyes of the matchmakers for the marriage of tele¬
communications and the computer. Printed matter, and all that
goes with it - the news stand, the public library, the junk mail
through the door - will be with us for some time yet, and typo¬
graphic letter forms will continue to be a source of interest and
pleasure for many and of revenue for some.

'Printed matter' is a very general term, taking in things as
different in kind as a birth certificate, the New Yorker, an airline
ticket, the Yellow Pages, War and Peace, and everything else one
can think of. It might be thought that, as in other fields of in¬
dustrial design, a type designer would have a particular sort of
work in mind when he or she begins a new type face. Types for
newspaper text or a telephone directory are certainly treated as
designs for a specific purpose. Serious attention is given to the
constraints in production and usage which test the designer's
willingness to give precedence to the functional over the aesthetic
aspects of the design. But many of the type faces that have been
introduced in recent years seem to have been designed not for a
specific task but for the favour of a class of people, the typo¬
graphers, who, for the past sixty years or so, have made a pro¬
fession of dealing with the verbal part of printed matter. The type
design studios and the suppliers of type fonts think of typo¬
graphers as being free to use any type face they fancy, and as
having the power, through the advertising agency or design office
that employs them, to influence typesetters to install a new type
series, however short-lived the typographers' favours are known
to be. Before the advent of filmsetting the typographers' power in
that respect was limited by the high cost to the typesetter of
matrices and the storage of them. It meant that typographers had
to be quite sure about the merits of a new type design before they
felt entitled to twist the arm of the typesetter. Filmsetting has
changed that. Digital fonts are not expensive and are becoming
cheaper. Storing them is not a problem. Typesetting houses,
whose numbers increase, take the capital expenditure on new
fonts as a matter of course, and some of them make a play for the
typographers' favour with the blandishment of the latest type
before being asked for it.

The abundance of types now available, and the rate at which
new designs are introduced, ought to be wholly beneficial; but
they seem to have had a soporific effect on taste and judgement.
There can be no other explanation for the low quality of some
designs now current. A number of faces introduced in recent