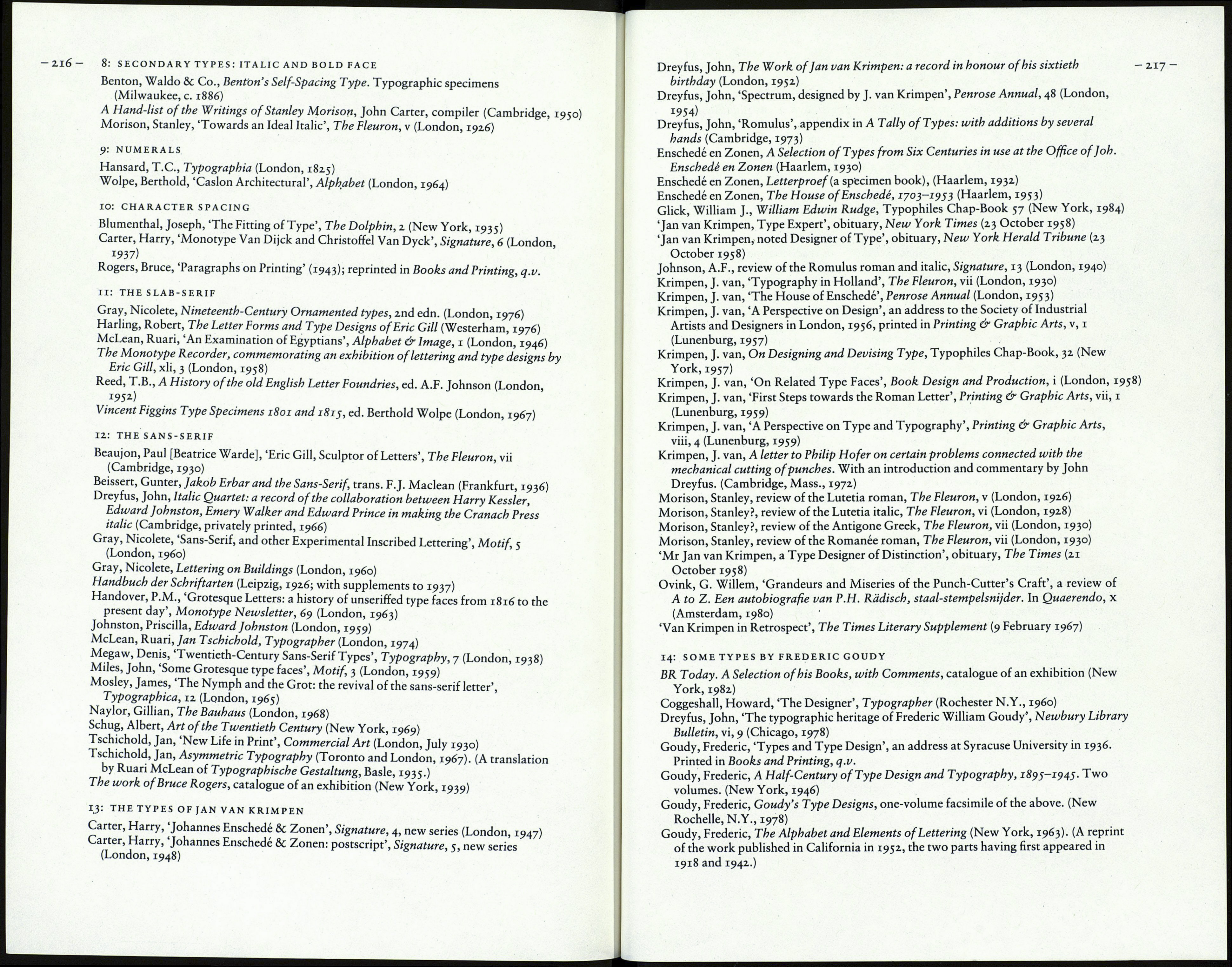 -214- years, text types as well as display, can only have been designed
Prospects by the incompetent and produced by the cynical. The fact that
they have found any approval at all induces the impression that
there are typographers whose appetite for anything new is
stronger than their discrimination. That comment hardly applies
to book typographers, most of whom are not much moved by
fancy. They are generally in that field of work because they like
books and want people to read them and, except when they
tackle a coffee table book too enthusiastically and allow the
layout to overwhelm the text, they are usually content to design a
plain readable page and to choose for it one of the tried and tested
text faces. Publicity typographers work under a different compul¬
sion. Their need to make print attractive and persuasive seems to
lead some of them to think that the reader will respond more
readily to a new type than to a familiar one. 'New' and 'familiar'
have meaning for the typographer but little or none for the ordi¬
nary reader, who, understandably, can only just identify a 'block'
letter from a 'small' one. What the reader actually responds to are
the simple attributes of clarity in the message and harmony and
polish in its presentation - qualities which, in Britain at the time
of writing, are more evident in television titles and captions than
in printed publicity work.

However, typographers are by definition knowledgeable
about type designs and most of them have some taste in the
matter, latent though it may sometimes be. It is to be hoped that
before long some means will be created - an independent journal,
perhaps - which will be more than just a source of information
about new designs derived from suppliers' handouts, but will act
as a forum in which critical judgement on typographic matters
can be expressed and debated, so that typographers will be
moved to examine their own preferences and prejudices, and type
designers will know that their latest offerings must undergo the
appraisal of people who not only enjoy type but have a critical
eye for its aesthetic and functional merits.

No doubt trashy type faces will continue to be designed so long
as their makers can see a profit in them. We must hope there will
be fewer of them, and more of the kind that can be admired for
something other than mere novelty. Typography may be no more
than 'a minor technicality of civilised life', as Stanley Morison
remarked, but it deserves the best we can give it.

For the history and development of type designs the following titles have frequently
been consulted in the course of this work:

The following is a work of particular interest. It is composed in twenty-one different

Books and Printing: a treasury for typophiles, ed. Paul A. Bennett (New York, 1951)

Some of the following works have been useful on several occasions, but they are listed
only under the title of the chapter for which they were chiefly consulted.

i: THE VOCABULARY OF TYPE

Morison, Stanley, A Tally of Types: with additions by several hands (Cambridge, 1973)

5: THE MAKING OF TYPE

Bigelow, Charles, 'Technology and the Aesthetics of Type', The Seybold Report (24