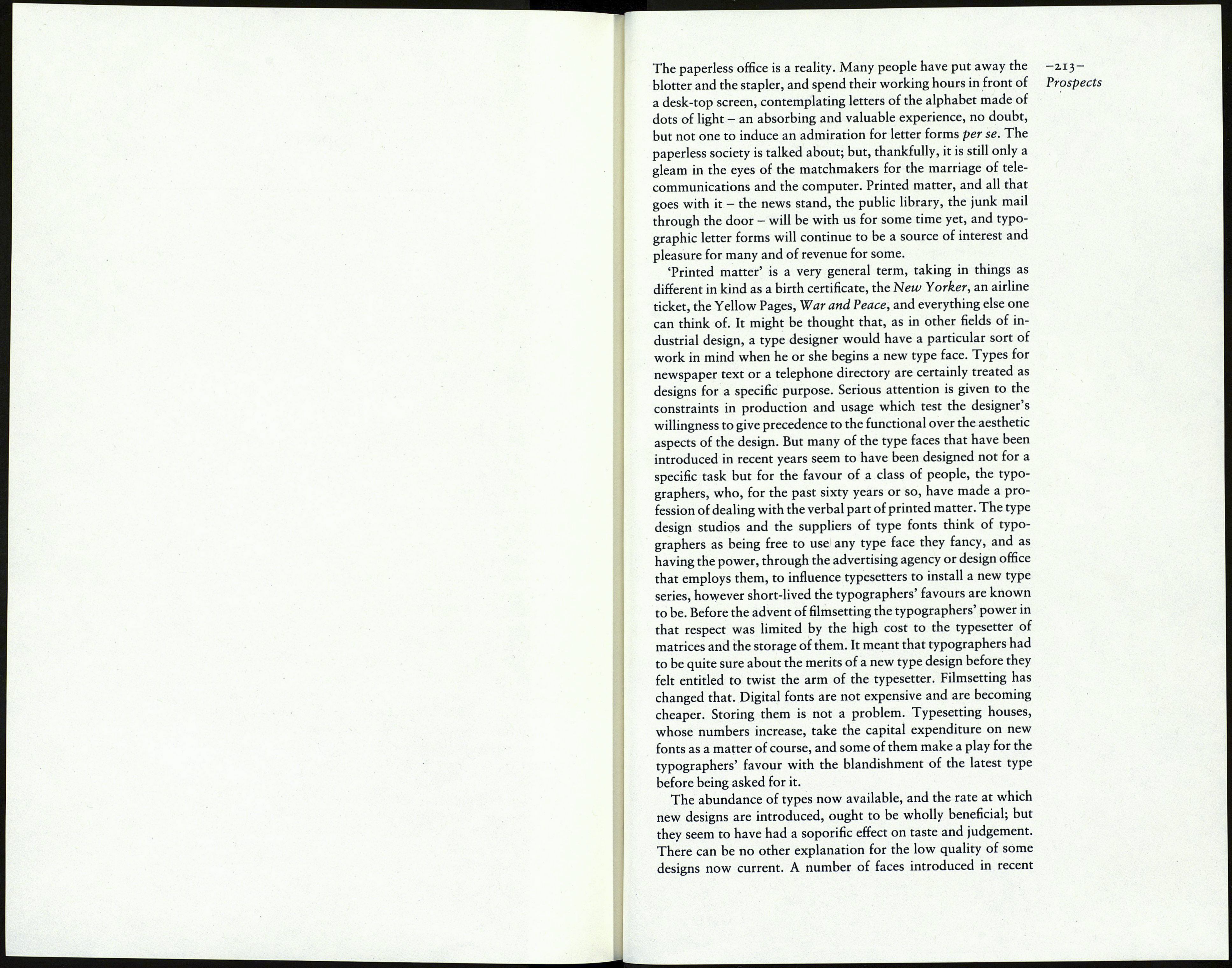 -2ІО- and therefore has sloping head serifs in the lowercase. If it had
Some designers and been modelled on, say, Bodoni Bold Italic it might have har-
their types monised better with the bold roman.

To express a personal view, I think the task that Morison insti¬
gated and directed in 1931 was the remodelling of an existing
type, the Plantin no, to an extent that fully justified him in calling
the outcome 'new'. In a letter to Updike in 1937 he wrote, 'It has
the merit ofnotlookingasifithad been designed by somebody in
particular . . .' This was not only a dig at Goudy but an ex¬
pression of his dislike of any sign of egoism - and no one will
disagree with him in that. But in saying that the type showed no
evidence of being designed by someone Morison indicated what I
regard as the cause of its chief defect. After all, a type of its kind is
not just an artefact; it is a design, the result of a sustained creative
act. It ought to have enough of a persona to make it more than
merely recognisable. It should have a character. To be sure, it
should not be a demonstration of a designer's conceit; but neither
should it be faceless. To my eye Times Roman lacks the insignia
of true creation; it is too much the reworking of something else,
the Plantin type - which was itself, as we know, a regulated
version of an earlier design. Its letter forms are well-bred but dull,
without subtlety of shape or engaging characteristic. (Francis
Meynell devised a way of providing its precursor with an attract-
See page 50. ive persona, in the type called 'Nonesuch Plantin'; perhaps Times
Roman would respond to similar treatment.) This absence of
character is obvious, and a little depressing, in display sizes; it is
less so in text sizes. Paradoxically, this dullness, which for me
denies the type a place in the first rank of distinction, becomes a
sort of virtue in that broad variety of work we might call 'plain
printing' - reference books, official printing and much else - but
not, to my mind, web-offset printing, where the serifs often de-
materialise so that the roman looks lifeless and the bold disagree¬
ably strident.

To make that criticism is not to diminish the magnitude of
Morison's efforts in the typographic transformation of The
Times; it was a remarkable achievement. After all, his one and
only venture in type designing was not the outcome of leisurely
contemplation and experiment, but of expediency; a set of types
designed to serve in a particular area of printing (indeed, in a very
particular newspaper), an area which he had lately studied from
the historian's viewpoint but in which he had had no practical
experience. In such circumstances uncertainties of judgement are
more than likely, as I know to my cost. The creating of the type
faces must have taught him a great deal. If the course of his life
had been different and he had produced a second type it might
well have been a masterpiece.