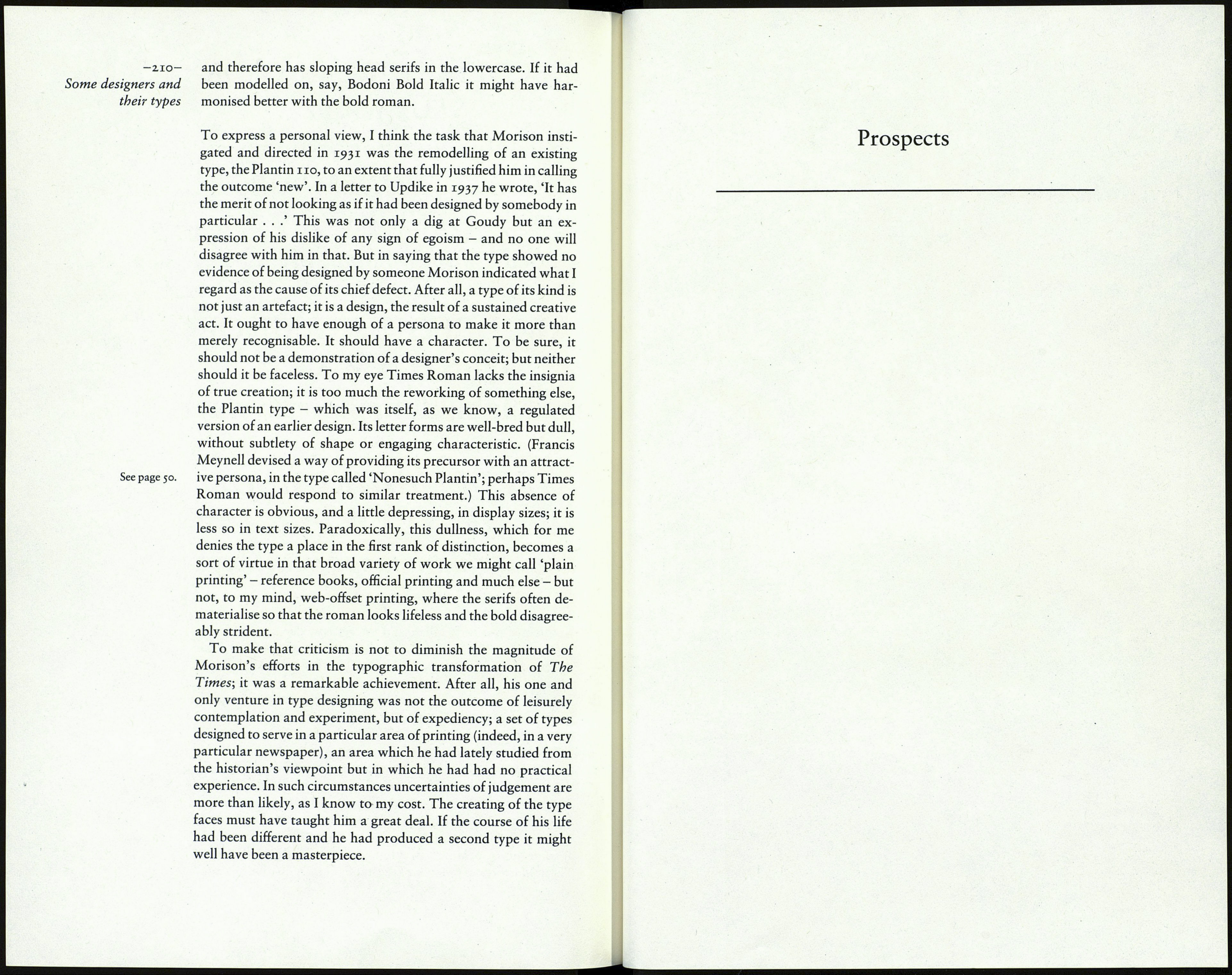 roman. The Extended Titling, always called simply '339' in the
paper's composing room, was quite the finest set of capitals in the
family. Allowing for the fact that the letters are by intention fairly
broad, it is instructive to compare them in detail with the capitals
of the familiar Times Bold, and to note how much better they are,
particularly the C, E, F and G. The most original of the titlings
was the Hever, Series 355, which was used in the paper's arts
columns. Its design owes nothing to the basic roman, but some¬
thing, no doubt, to Poliphilus, at least in the C, G, S and W.

Incidentally, all the titlings were unusual in not filling the body
size. In fact, the capitals and numerals are smaller than those of
the ordinary roman and bold faces. There was a good practical
reason for making them carry a substantial amount of 'white'
below the baseline; it eliminated the need to insert spacing 'leads'
between the lines of a heading - and to be able to save say thirty
seconds per heading amounted to a welcome benefit in page
make-up in the hectic hour before press time.

There was another member of the family created at the outset,
the Times Roman Wide, which was thought to be the version of
the roman that would be preferred for book work. In the 10, 11
and 12 point the baseline is slightly lower than in Times Roman,

so the face is a little taller; and the set is wider, to enable the
characters to be expanded - a process that would have been
better avoided in the case of the italic. The type has never become
popular.

Times Semi-bold was created in 1936, in 7 point, for the com¬
position of a hand-held Bible. The person in charge of the design
must have been aware of the excessive height of v, w and other
letters in the original Times Roman, as mentioned earlier. In the
Semi-bold they are much improved. In the Monotype original
version the Semi-bold is excellent up to 12 point. At 14 point the
design becomes curiously narrow. Present-day film-set versions
make a better effect in display sizes than did the metal version.

Times Bold Italic is not one of the original set of faces. It
appeared in 1956, almost twenty-five years after the bold roman.
The design follows the style of the italic companion to the roman,