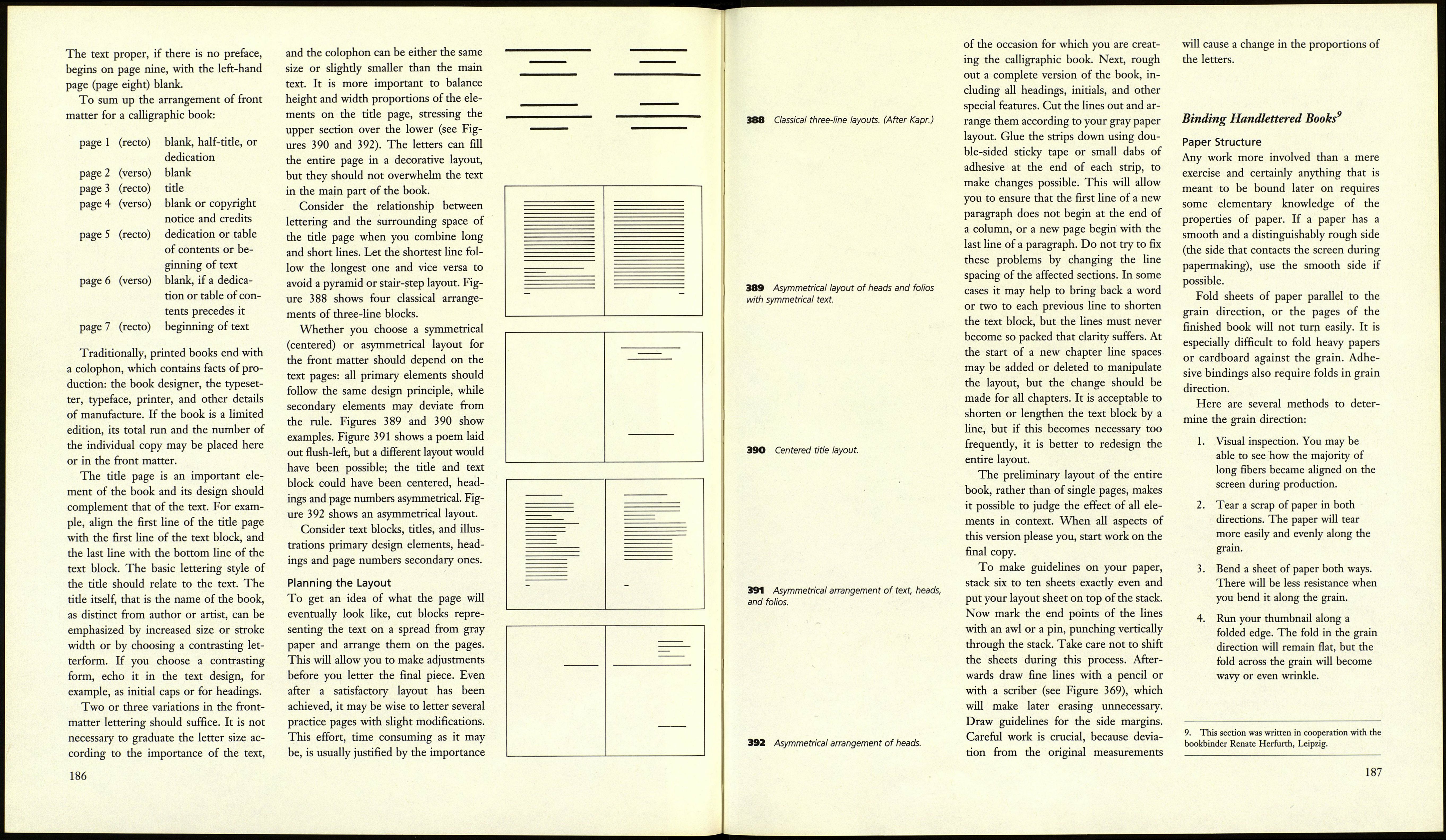 below the text block at the outer mar¬
gins or centered. Both symmetrical and
asymmetrical layouts can be numbered
this way, but the folios can also be
positioned at the left margin on both
sides of the double page. Do not place
both numbers in the inner margin unless
the entire spread is symmetrical. The
numbers can be emphasized by their po¬
sition or by color, but it is best not to
give them too much prominence.

Marginalia. Old documents frequendy
contain remarks that were added later in
a different hand in the margins. These
notes often grace the page and suggest
the possibility of including them inten¬
tionally in the design. Marginalia, also
called side bars, should be lettered in a
smaller hand and in a less formal style
than the main text. Use them for less im¬
portant features such as references to
other parts of the text, subheadings,
page numbers, or footnotes. Roman text
could be supplemented by italic margin¬
alia, black ink by marginalia in a con¬
trasting color such as red or blue. Start
the first line of the marginalia in the
same line as the text part that it refers to.
The following lines cannot be matched,
since the smaller size of the lettering re¬
quires smaller line spaces (Figure 387).
Consider the width of the margin and fit
the side bar to it: about half the width of
the margin is a good width for the side
bar. Letter all marginalia on separate
sheets of paper to determine the right
proportions before you add them to the
text.

Footnotes. Footnotes are text supple¬
ments. They tell the reader about source
material or other related facts, and are
placed at the foot of the page or at the
end of the chapter. (In a handlettered
book, the same information can be given
in the form of marginalia, as already

mentioned.) The need for footnotes will
not arise often in calligraphic books, but
some hints for their arrangement may be
helpful nevertheless. Mark the appropri¬
ate spot on the text with a small raised
numeral (the size that you would use to
write fractions) in a style that matches
your text alphabet. Put the numeral
right next to the word that needs further
explanation, or after the punctuation
mark at the end of the sentence, if the
footnote refers to the entire statement.
If a page contains no more than three
footnotes, you can use asterisks and
other traditional symbols such as the
dagger instead of numerals (Figure 386).
The space that the footnotes occupy has
to be integrated into the text block.
Shorten the column by the appropriate
number of lines and separate the text
from the footnotes by one line space. If
the resulting space seems too wide, fill it
optically with a line, drawn the full width
of the text, using the same pen that was
used for the text. Letter the footnotes
themselves considerably smaller than the
text and start each one with the appro¬
priate numeral or symbol. The number
should be the same size as the footnote
lettering, and written on the baseline,
followed by a period or a space. You may
start the footnote text flush left or in¬
dented. If the indents of the text itself
were three letters or Vz inch (1 centime¬
ter) deep, use the same measure for the
footnote indents. Start a new line for
each footnote.

Poetry. "The perfection in the language
of poetry has to be highlighted optically.
The typographic expression follows the
strict laws of the poem's meter or its free
rhythm," says Albert Kapr.8 This con¬
cept, though meant in relation to typog-

raphy, is even more relevant for the
handlettered book. Here, the graphic
artist has considerable more leeway than
the designer of a typeset book, but there
must never be a discrepancy between the
form and the original intention of the
author. Lines and stanzas have to be
carefully observed, sonnets and terza
rima must remain just that.

Since the lines of a poem can be of
quite different lengths, pick a medium
one as measure for the width of the text
block, and let longer lines protrude into
the margin space. Separate extremely
long lines into two parts and start the
second one after a deep indent in a new
line. If this should be necessary more
than once in a poem, all indents should
be the same size. Sometimes the ensuing
layout is less than pleasing, especially if
there are lines that contain only one
word as a result of the separation. In this
case it is better to write the word at the
end of the following line and separate it
with a vertical line, rather than isolate it.
Two or three words in a group are pre¬
ferable to single words, and repetitions
of these right-end additions to lines
should also be aligned with one another.

Tides are best arranged flush left with
the text. Allow one line space between
stanzas and at least that much between
the tide and the first line of the poem.

Front Matter and Colophons
Dating back to the invention of the
printing press, the front matter contains
all the publishing information about a
book. It comprises all the material be¬
fore the text begins. In older, handwrit¬
ten books the text started on a recto
(right-hand) page with an ornate initial,
or with the first words or lines high¬
lighted by a larger size or different color.
Some texts used both initial caps and
other ways of stressing the beginning.
The tide of the book could be written in

small letters at the beginning of the text,
while all other information appeared in
the colophon at the end of the book.

Tide pages of the sort that we know
from printed books are also found in
calligraphic ones because they are aes¬
thetically pleasing as well as informative
and provide a kind of overture for the
following text. The handlettered book,
however, offers a wider range of vari¬
ations than the printed book for the de¬
sign of the title page.

The traditional elements and se¬
quence of the front matter is as follows.
Page one, the first right-hand (recto)
page, is usually a half-tide page, contain¬
ing only the tide of the work. It may be
replaced by a dedication or left out al¬
together in the calligraphic book. Page
two, the first left-hand (verso) page, is
either blank, or contains a frontispiece
or a series title (if the book is one in a
series); in the calligraphic book it may be
blank, or it can be incorporated into the
design of page three, the tide page,
which contains the tide and the name of
the author. In the printed book the title
page carries the name of the publisher,
and sometimes the city and year of pub¬
lication. In our handlettered book this
page may give the name of the letterer
as well as the place and date executed. If
the book contains material taken from
another work, include the name of the
original work and its author (and trans¬
lator, if applicable), on the tide page.
Permission to use copyrighted material
must be obtained from the copyright
owner, and appropriate credit for it
should be given. Page four contains the
copyright notice, if copyright protection
is desired. A dedication may be placed
on page five. Page six is blank, if a dedi¬
cation precedes it. Handlettered books
rarely need a table of contents, but the
contents may be placed on page seven
or, if there is no dedication, on page five.