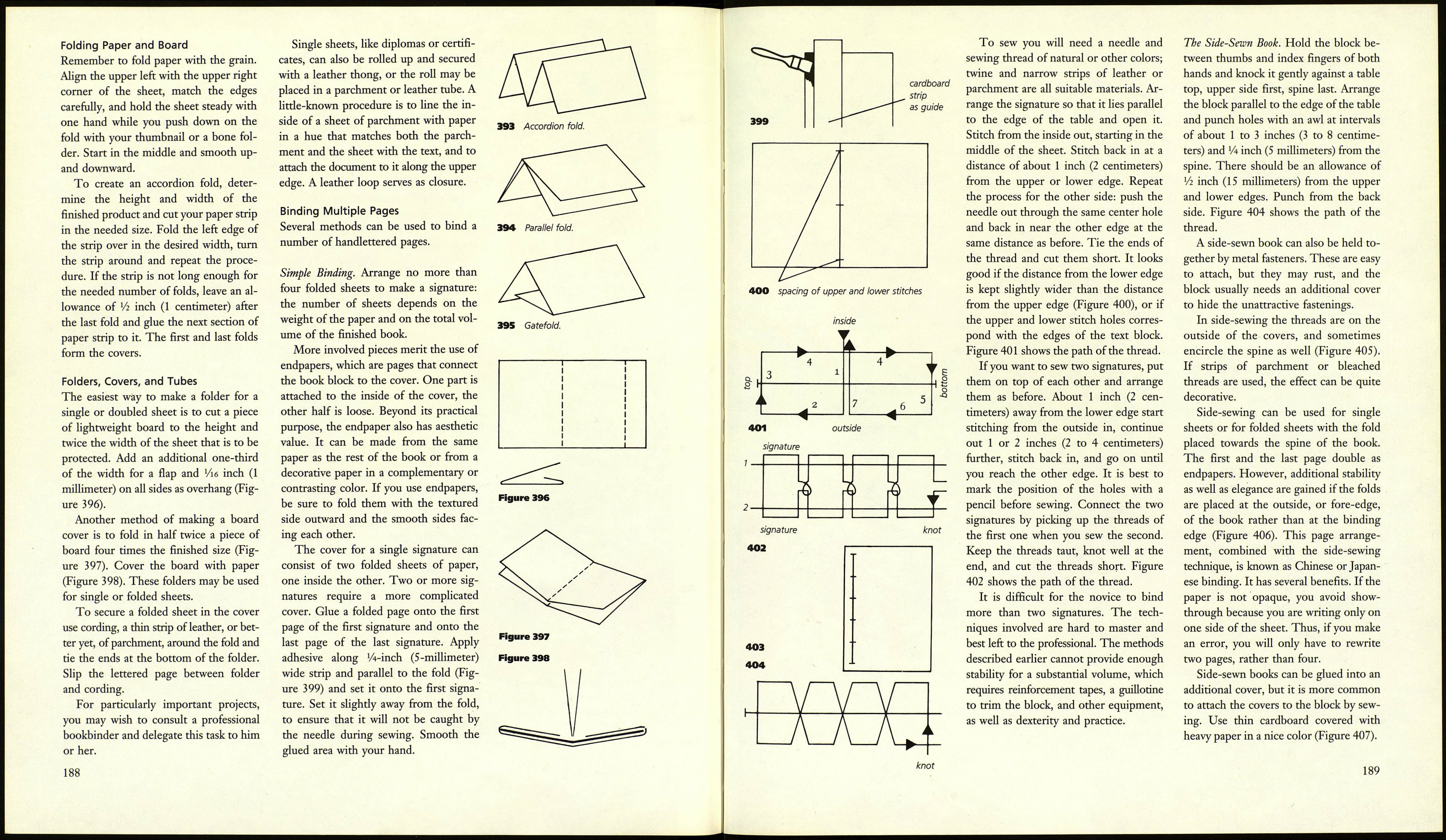 The text proper, if there is no preface,
begins on page nine, with the left-hand
page (page eight) blank.

To sum up the arrangement of front
matter for a calligraphic book:

Traditionally, printed books end with
a colophon, which contains facts of pro¬
duction: the book designer, the typeset¬
ter, typeface, printer, and other details
of manufacture. If the book is a limited
edition, its total run and the number of
the individual copy may be placed here
or in the front matter.

The tide page is an important ele¬
ment of the book and its design should
complement that of the text. For exam¬
ple, align the first line of the tide page
with the first line of the text block, and
the last line with the bottom line of the
text block. The basic lettering style of
the tide should relate to the text. The
tide itself, that is the name of the book,
as distinct from author or artist, can be
emphasized by increased size or stroke
width or by choosing a contrasting let¬
terform. If you choose a contrasting
form, echo it in the text design, for
example, as initial caps or for headings.

Two or three variations in the front-
matter lettering should suffice. It is not
necessary to graduate the letter size ac¬
cording to the importance of the text,

and the colophon can be either the same
size or slighdy smaller than the main
text. It is more important to balance
height and width proportions of the ele¬
ments on the tide page, stressing the
upper section over the lower (see Fig¬
ures 390 and 392). The letters can fill
the entire page in a decorative layout,
but they should not overwhelm the text
in the main part of the book.

Consider the relationship between
lettering and the surrounding space of
the tide page when you combine long
and short lines. Let the shortest line fol¬
low the longest one and vice versa to
avoid a pyramid or stair-step layout. Fig¬
ure 388 shows four classical arrange¬
ments of three-line blocks.

Whether you choose a symmetrical
(centered) or asymmetrical layout for
the front matter should depend on the
text pages: all primary elements should
follow the same design principle, while
secondary elements may deviate from
the rule. Figures 389 and 390 show
examples. Figure 391 shows a poem laid
out flush-left, but a different layout would
have been possible; the tide and text
block could have been centered, head¬
ings and page numbers asymmetrical. Fig¬
ure 392 shows an asymmetrical layout.

Planning the Layout
To get an idea of what the page will
eventually look like, cut blocks repre¬
senting the text on a spread from gray
paper and arrange them on the pages.
This will allow you to make adjustments
before you letter the final piece. Even
after a satisfactory layout has been
achieved, it may be wise to letter several
practice pages with slight modifications.
This effort, time consuming as it may
be, is usually justified by the importance

of the occasion for which you are creat¬
ing the calligraphic book. Next, rough
out a complete version of the book, in¬
cluding all headings, initials, and other
special features. Cut the lines out and ar¬
range them according to your gray paper
layout. Glue the strips down using dou¬
ble-sided sticky tape or small dabs of
adhesive at the end of each strip, to
make changes possible. This will allow
you to ensure that the first line of a new
paragraph does not begin at the end of
a column, or a new page begin with the
last line of a paragraph. Do not try to fix
these problems by changing the line
spacing of the affected sections. In some
cases it may help to bring back a word
or two to each previous line to shorten
the text block, but the lines must never
become so packed that clarity suffers. At
the start of a new chapter line spaces
may be added or deleted to manipulate
the layout, but the change should be
made for all chapters. It is acceptable to
shorten or lengthen the text block by a
line, but if this becomes necessary too
frequendy, it is better to redesign the
entire layout.

The preliminary layout of the entire
book, rather than of single pages, makes
it possible to judge the effect of all ele¬
ments in context. When all aspects of
this version please you, start work on the
final copy.

To make guidelines on your paper,
stack six to ten sheets exacdy even and
put your layout sheet on top of the stack.
Now mark the end points of the lines
with an awl or a pin, punching vertically
through the stack. Take care not to shift
the sheets during this process. After¬
wards draw fine lines with a pencil or
with a scriber (see Figure 369), which
will make later erasing unnecessary.
Draw guidelines for the side margins.
Careful work is crucial, because devia¬
tion from the original measurements

will cause a change in the proportions of
the letters.

Any work more involved than a mere
exercise and certainly anything that is
meant to be bound later on requires
some elementary knowledge of the
properties of paper. If a paper has a
smooth and a distinguishably rough side
(the side that contacts the screen during
papermaking), use the smooth side if
possible.

Fold sheets of paper parallel to the
grain direction, or the pages of the
finished book will not turn easily. It is
especially difficult to fold heavy papers
or cardboard against the grain. Adhe¬
sive bindings also require folds in grain
direction.

Here are several methods to deter¬
mine the grain direction:

1. Visual inspection. You may be
able to see how the majority of
long fibers became aligned on the
screen during production.

2. Tear a scrap of paper in both
directions. The paper will tear
more easily and evenly along the
grain.

3. Bend a sheet of paper both ways.
There will be less resistance when
you bend it along the grain.

4. Run your thumbnail along a
folded edge. The fold in the grain
direction will remain flat, but the
fold across the grain will become
wavy or even wrinkle.

9. This section was written in cooperation with the
bookbinder Renate Herfurth, Leipzig.