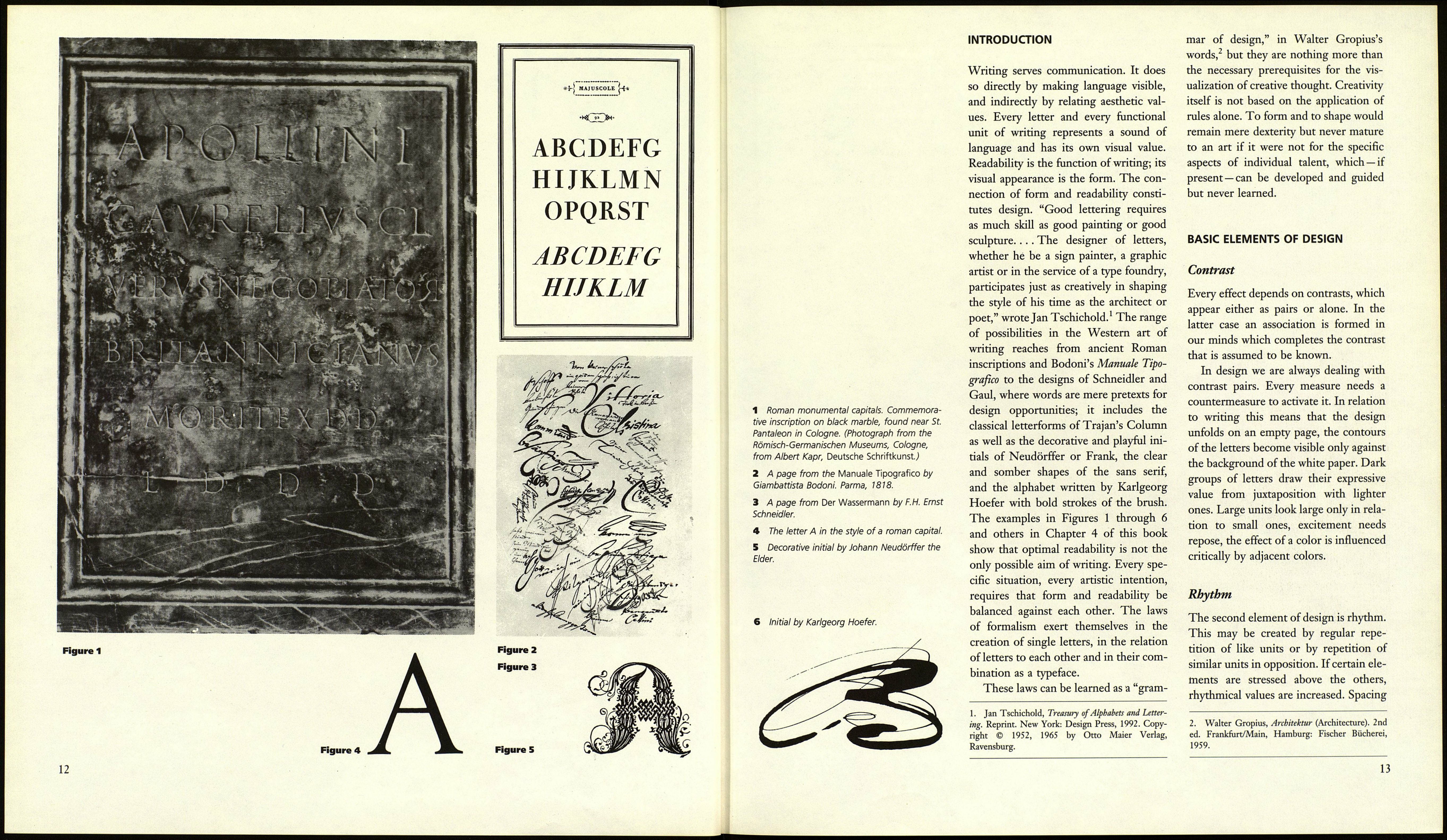 take different directions depending on
the learner's skill, talent, diligence,
temperament, and creativity. No book
can offer precisely programmed help on
questions such as text format, choice of
pens or techniques, or when to switch
from work on simple forms to more
complex problems.

Every student has to decide for him¬
self where his abilities lie. It is much bet¬
ter to aim for a satisfactory performance
on an "easy" project than to allow ambi¬
tion to dictate an unobtainable goal.

The illustrations in Chapter 1 were
chosen because they represent generally
accepted forms. The author does not in¬
tend to use this text to peddle her own
opinions, and the learner is warned
against conscious and labored efforts to
express his personality in his lettering
style. "To learn what can be learned is
not a hindrance to originality, but neces¬
sity and enrichment" (Hermann Hesse).
Writing is the most important means of
expression for human beings. It is more
than just the visualizing of language, and
precisely for that reason it is imperative
that its form correspond to the job at
hand. Craft, not far-fetched originality,
is needed.

Last but not least I want to point out
that this book does not teach what is
commonly known as calligraphy. Rather
it is intended to inspire an understand¬
ing of the forces of material forms and
surfaces as a basis for good lettering,
drawn or typographic.

The course for advanced students
(Chapter 3) comprises the development
of letters from Roman monumental cap¬
itals to the sans serifs of the nineteenth
century. Assuming the mastery of skills
taught in Chapter 2, I suggest that the
lettering styles be studied in the order of
their historic emergence, since each one
of them built its form materials on the
basis of earlier styles.

In Chapter 41 have tried to offer illus¬
trations that show as many different ap¬
plications and inspirations as possible.
Again, the beginner should be warned
not to give in to the temptation to take
on projects that are too advanced for his
or her abilities.

I developed the manuscript with the
help of the following texts: Writing and
Illuminating and Lettering by Edward
Johnston, Deutsche Schriftkunst by Albert
Kapr, Treasury of Alphabets and Lettering
by Jan Tschichold, and Die schöne Schrift
by Frantisek Muzika. I am also indebted
to the Schneidler writing school, and the
Leipzig calligraphy tradition. I have
utilized the skills and knowledge gained
during my years of studying and teach¬
ing at the Hochschule für Grafik und
Buchkunst in Leipzig.