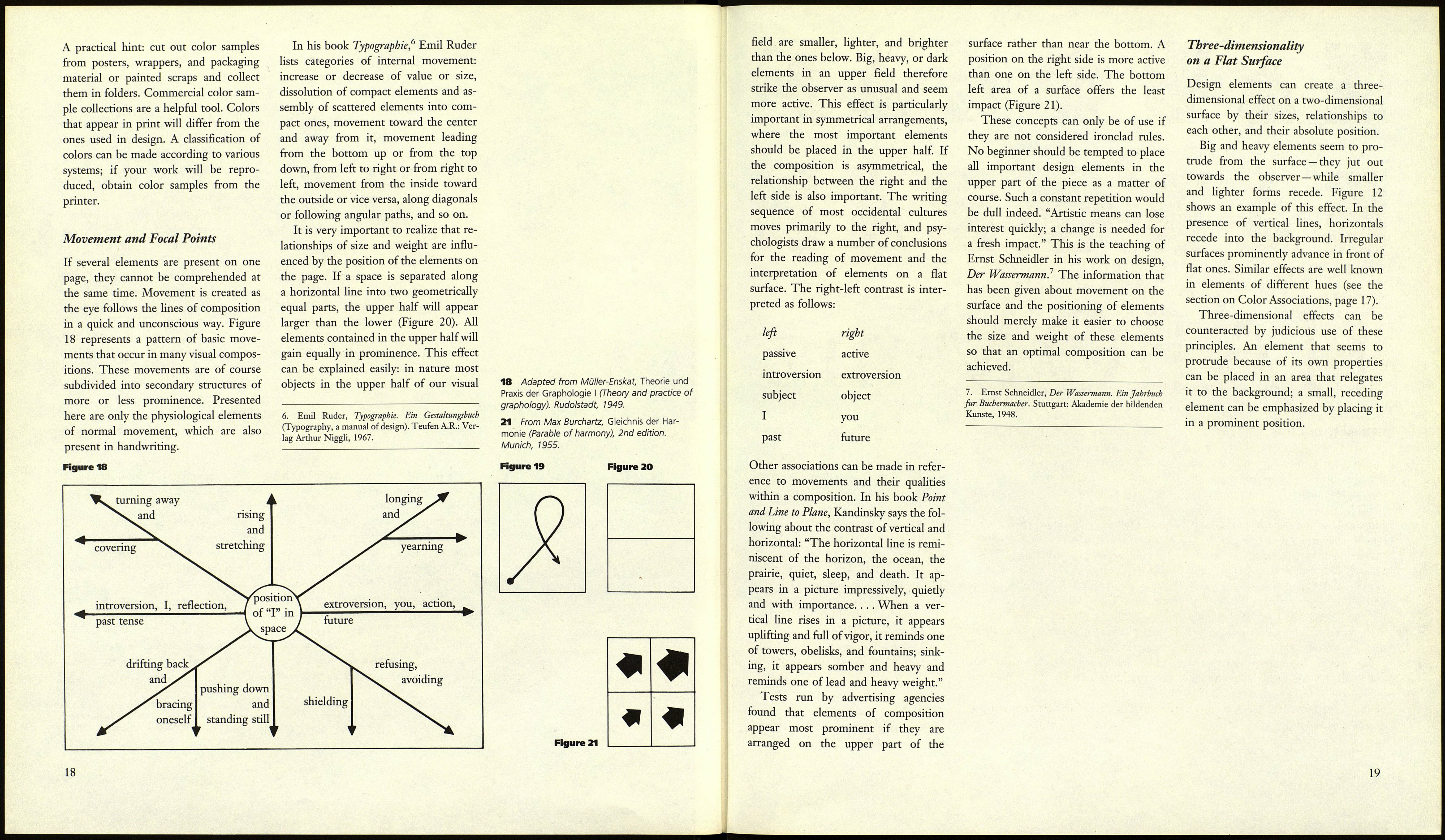 In lettering color only serves and sup¬
ports the aim of readability: it attracts
attention and creates associations. A
basic knowledge of color theory has to
be assumed. A good text on the topic is
recommended for further reference.

Light/Dark Contrast
Optical illusions have to be taken into
account in relating different sizes to each
other; a similar situation exists in color
design. The values perceived by our eyes
are rarely identical to the actual color
values. Adjacent colors and light condi¬
tions influence our perception. Disre¬
garding the strongest light/dark contrast
that exists, between black and white,
every hue of the color wheel has its own

lightness or value, the lightest for yel¬
low, the darkest for blue. Red and green
have equal values. In addition, every
color can be represented in lighter or
darker shades. As seen in Figure 17,
these gradations of value are of great
importance for the relationship of letter¬
ing and background, since the legibility
of the writing depends on them. The
greatest contrast can be seen in fields la
and 3e.

A pure white surface may be too
harsh for the design of books, since its
radiance causes the contours of the let¬
ters to appear fuzzy, and clarity is dimin¬
ished. It is common, therefore, to use
white paper with a slight warm tint for
commercial applications. To prepare a
wall for lettering, white paint should be

mixed with some ocher or brown. Black
can also be softened through the addi¬
tion of brown.

In comparing the fields lb, c, d and
3b, c, d in Figure 17, we can observe that
the white circles seem more detached
from the background than the black
ones. This happens because white is a
more active color than black and out¬
shines the other colors. Thus, on col¬
ored backgrounds of medium darkness
white lettering appears more clearly
than black lettering. In row 1 the circle
in field e seems even more prominent
than those in fields b, c, and d because
of its white contour. In row 2 it can be
observed that the same gray circle
appears darker on white, and lighter on
black. Similar effects result when gray

circles are put on intensely colored back¬
grounds. The gray will shift towards the
complementary color of the background
— that is, it appears greenish on red,
yellowish on blue. Another setup in¬
volves primary colors. If the gray circles
are replaced by red ones on blue and
yellow backgrounds, the red circle on
the yellow will appear darker than the
red circle on the blue, because it takes
on some of the complementary color of
yellow. This phenomenon is known as
simultaneous contrast. The exception
to it occurs when two complementary
colors of the color wheel in their full
strength are opposed. In this case both
colors would appear enhanced. For opti¬
mal readability and visibility over greater
distances the light/dark contrast of
lettering and background is of utmost
importance. A red and a green of equal
value can cancel each other out visually
and produce a flickering image.

Warm/Cool Contrast
No actual feelings of warmth and cold¬
ness are connected to colors. The words
"warm" and "cool" represent "an asso¬
ciation that the colors elicit in our
minds."4 The strongest warm/cool con¬
trast exists between a yellowish red and
a greenish blue. On the color wheel the
warm colors are located between yellow
and red, the cool ones between blue and
green. The colors between red and blue
are simultaneously warm and cool, the
ones between yellow and green are
neither warm nor cool. Warm colors
seem active, attract attention, and ad¬
vance from the surface; cool ones seem
passive and recede into the surface.

Pure and "Broken" Colors
Every color loses some of its brightness
when it is dulled or "broken" by the ad¬
dition of gray, or, more effectively, by
the addition of some of its complemen¬
tary color. Pure colors appear prominent
opposed to broken ones; the intensity of
a pure color can be heightened consider¬
ably by juxtaposition with broken colors.

Colors have psychological and symbolic
value, though associations vary depend¬
ing on culture or even point of view. For
example, the color green may conjure up
the image of immaturity or, alterna¬
tively, environmental concerns. In some
cultures white is associated with mourn¬
ing, whereas in the West we generally
think of it as pure, festive, cheerful,
and noble. During the Middle Ages in
Germany green, not red, was the color
of love. These are just a few examples of
different color associations. The associa¬
tions also depend on whether the colors
are light or dark, warm or cool, pure or
broken, and are heavily influenced by
what Albert Kapr calls "conditions of
landscape, nationality, history, religion,
and class."5 Tradition and custom per¬
petuate them.

Colors also depend on the light under
which they are seen. At dusk red appears
darker, blue lighter. Artificial light alters
almost all colors, and influences blue
and green most strongly.

There are no recipes for good color
combinations. Taste can be cultivated
through the study of works of classical
and modern painting or graphic art.
Abstract works are particularly useful.