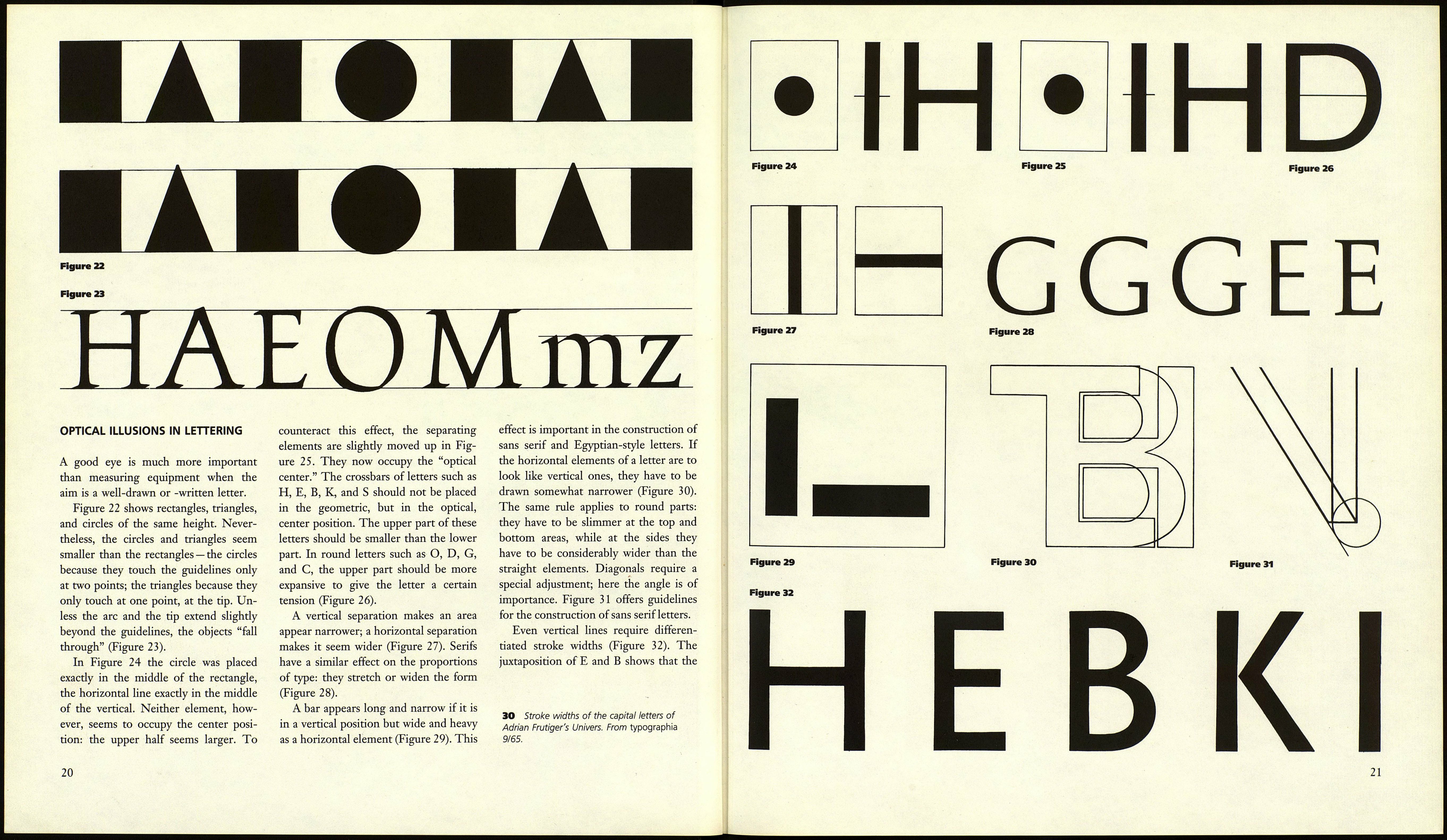 A practical hint: cut out color samples
from posters, wrappers, and packaging
material or painted scraps and collect
them in folders. Commercial color sam¬
ple collections are a helpful tool. Colors
that appear in print will differ from the
ones used in design. A classification of
colors can be made according to various
systems; if your work will be repro¬
duced, obtain color samples from the
printer.

If several elements are present on one
page, they cannot be comprehended at
the same time. Movement is created as
the eye follows the lines of composition
in a quick and unconscious way. Figure
18 represents a pattern of basic move¬
ments that occur in many visual compos¬
itions. These movements are of course
subdivided into secondary structures of
more or less prominence. Presented
here are only the physiological elements
of normal movement, which are also
present in handwriting.

In his book Typographie,6 Emil Ruder
lists categories of internal movement:
increase or decrease of value or size,
dissolution of compact elements and as¬
sembly of scattered elements into com¬
pact ones, movement toward the center
and away from it, movement leading
from the bottom up or from the top
down, from left to right or from right to
left, movement from the inside toward
the outside or vice versa, along diagonals
or following angular paths, and so on.

It is very important to realize that re¬
lationships of size and weight are influ¬
enced by the position of the elements on
the page. If a space is separated along
a horizontal line into two geometrically
equal parts, the upper half will appear
larger than the lower (Figure 20). All
elements contained in the upper half will
gain equally in prominence. This effect
can be explained easily: in nature most
objects in the upper half of our visual

field are smaller, lighter, and brighter
than the ones below. Big, heavy, or dark
elements in an upper field therefore
strike the observer as unusual and seem
more active. This effect is particularly
important in symmetrical arrangements,
where the most important elements
should be placed in the upper half. If
the composition is asymmetrical, the
relationship between the right and the
left side is also important. The writing
sequence of most occidental cultures
moves primarily to the right, and psy¬
chologists draw a number of conclusions
for the reading of movement and the
interpretation of elements on a flat
surface. The right-left contrast is inter¬
preted as follows:

Other associations can be made in refer¬
ence to movements and their qualities
within a composition. In his book Point
and Line to Plane, Kandinsky says the fol¬
lowing about the contrast of vertical and
horizontal: "The horizontal line is remi¬
niscent of the horizon, the ocean, the
prairie, quiet, sleep, and death. It ap¬
pears in a picture impressively, quietly
and with importance. . . . When a ver¬
tical line rises in a picture, it appears
uplifting and full of vigor, it reminds one
of towers, obelisks, and fountains; sink¬
ing, it appears somber and heavy and
reminds one of lead and heavy weight."
Tests run by advertising agencies
found that elements of composition
appear most prominent if they are
arranged on the upper part of the

surface rather than near the bottom. A
position on the right side is more active
than one on the left side. The bottom
left area of a surface offers the least
impact (Figure 21).

These concepts can only be of use if
they are not considered ironclad rules.
No beginner should be tempted to place
all important design elements in the
upper part of the piece as a matter of
course. Such a constant repetition would
be dull indeed. "Artistic means can lose
interest quickly; a change is needed for
a fresh impact." This is the teaching of
Ernst Schneidler in his work on design,
Der Wassermann.7 The information that
has been given about movement on the
surface and the positioning of elements
should merely make it easier to choose
the size and weight of these elements
so that an optimal composition can be
achieved.

Three-dimensionality
on a Flat Surface

Design elements can create a three-
dimensional effect on a two-dimensional
surface by their sizes, relationships to
each other, and their absolute position.

Big and heavy elements seem to pro¬
trude from the surface —they jut out
towards the observer — while smaller
and lighter forms recede. Figure 12
shows an example of this effect. In the
presence of vertical lines, horizontals
recede into the background. Irregular
surfaces prominently advance in front of
flat ones. Similar effects are well known
in elements of different hues (see the
section on Color Associations, page 17).

Three-dimensional effects can be
counteracted by judicious use of these
principles. An element that seems to
protrude because of its own properties
can be placed in an area that relegates
it to the background; a small, receding
element can be emphasized by placing it
in a prominent position.