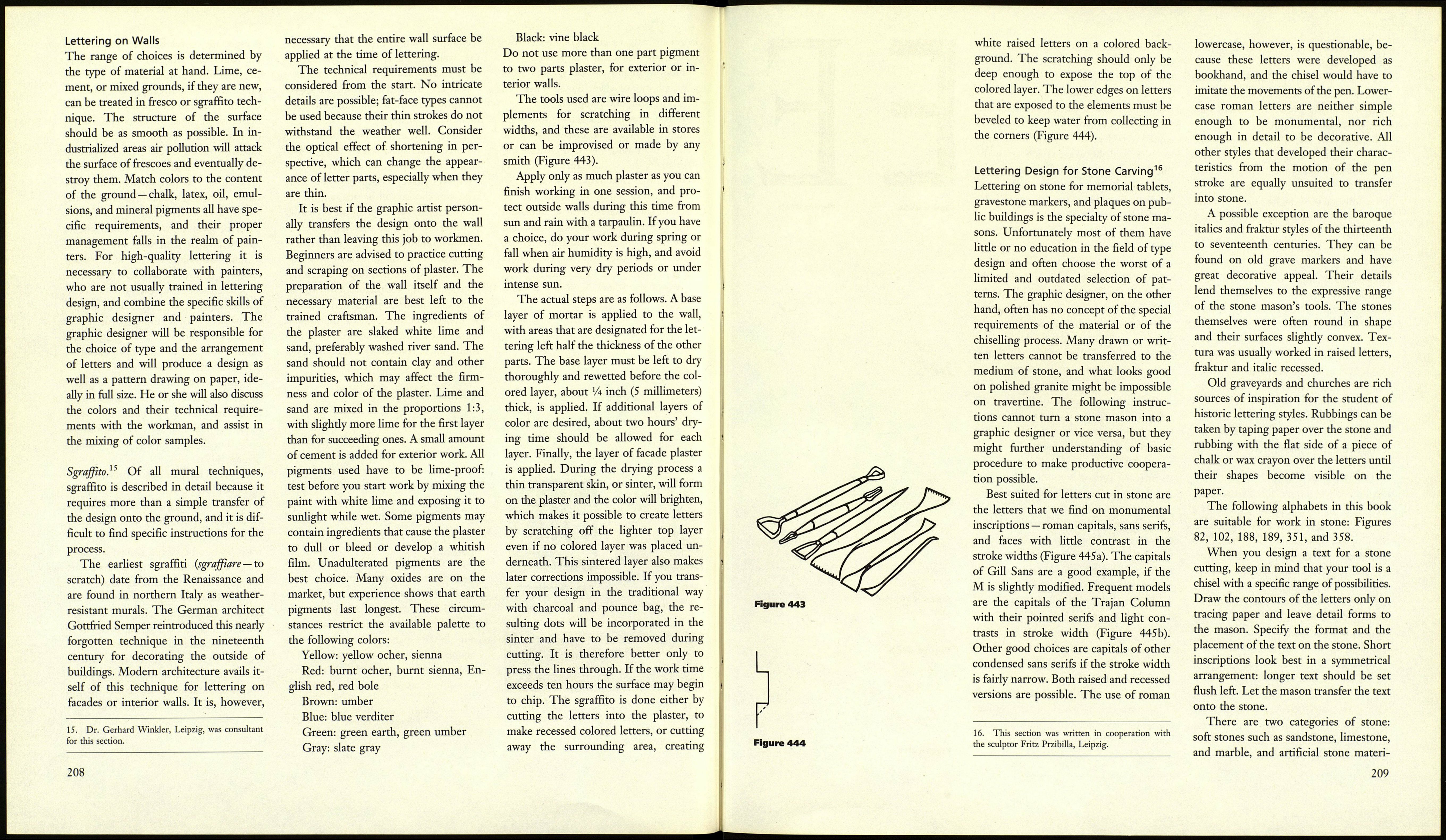 with the facade. Lettering should not
overpower architecture — it is usually
much too large.

In choosing materials and techniques,
take into consideration the lighting con¬
ditions both day and night, the way in
which the lettering will be secured on
the structure, requirements of durability,
and last but not least the colors and tex¬
tures of the background and the sur¬
rounding areas. When choosing a letter
style, remember that on modern struc¬
tures we often find a constructed sans
serif. The effect of this style of lettering
parallels a functional puritanism in mod¬
ern architectural design. Basic attitudes
in architecture have been changing, but
have not yet influenced lettering and its
application. But those style problems
aside, roman types such as Garamond,
Bodoni, or Walbaum and historical sans
serifs or Egyptians are often much better
suited to modern building styles because
they enliven the glass, aluminum, and
concrete surfaces in a most appealing
way.

It is more difficult to choose the right
lettering style for a historic building.
Proceed with great care. The letters
must be compatible with the era. Neon
signs have no place on architecture that
predates electricity. The eclectic styles
of the latter half of the nineteenth cen¬
tury pose special problems. Here, keep
neon signs small to avoid stylistic con¬
tradictions, and consider the variations
of classic typefaces that were developed
at the beginning of the nineteenth cen¬
tury and the beautiful and detailed rich
Egyptians and sans serifs from the same
period.

Whatever the style you select, it must
lend itself to the method and materials
that you want to use. Not every lettering
style can be adapted. Handwritten mod¬
els are particularly sensitive. Neon signs
could represent handwriting, as long as

the letters are mounted on a flat surface
and not on three-dimensional forms.
Three-dimensional lettering should not
be used if the viewers' vantage point will
be low, since the perspective may distort
the forms. Problems can arise if an al¬
ready existing logo has to be incorpo¬
rated into the design; that is why it is
best to plan such applications when you
design a logo.

A good relationship with the architect
and the workmen is essential for success
in a construction job. It is imperative to
obtain all relevant technical information
before the designing process can begin.

Make a sketch of all the characters in
the right proportions. Get a photograph
of the building you are working on, and
make a model in cardboard, if necessary.
Use the actual colors, if you can, and
check them on location. It might even
be possible to project a slide of your de¬
sign onto the appropriate area of the
building at night to get an impression of
the final effect.

Letters can be scratched in plastered
walls (sgraffito), painted, set in mosaic,
or constructed in various materials and
applied. Match backgrounds of ceramic
or natural or artificial stone with letters
of the same material. The lettering can
consist of single letters that are flat or
three-dimensional, or of completed signs
that are attached to the wall.

Material for single letters can be metal
that is treated in various ways (plated,
gilded, chromed, enameled). Letters
with serifs are usually cast or punched. If
every letter is produced individually, it
can be cut from sheet metal or from
metal rods, formed, mounted, and as¬
sembled. Welding is another possibility.
Plastic materials can be poured into
forms, reinforced with glass fibers for

larger formats, or cut. Wood letters can
be cut out with a saw and painted.

Hollow shapes can be created from
glass, plastic, or sheet metal. They can
be sawn, bent, and mounted.

If you attach single letters to a wall,
mount them at a slight distance from the
wall so that rain will not create dirty
streaks on the wall. Figure 436 shows
some profiles of relief letters.13

The backgrounds for signs can be
made of sheet metal (bronze, steel, and
other metals), glass, plastic, wood, and
stone. On metal you can paint letters,
punch or saw them out, or use a relief

442 This is an interesting idea, but unfortu¬
nately the details of the lowercase letterforms
cause light spots. Capital letters might have
made a better solution.

technique, such as bronze casting, etch¬
ing, welding, inlay, or even gluing. On
glass you can paint, engrave, or etch.

Concrete is a good medium for relief
or three-dimensional work—it is not used
nearly often enough in this capacity.

Always make certain that the letter
type you choose can be adapted for use
on your materials. Capitals are preferable
to lowercase because they are more sta¬
tic and monumental in their appearance.

The list of possibilities is by no means
complete, nor are the following descrip¬
tions of specific techniques. Only the as¬
pects that influence the design decisions
or that can be executed by the graphic
artist alone are discussed. Whatever
your choice, consult with specialists be¬
fore the work commences.

Neon lettering poses special problems
because it has to remain visible day and
night, and the character of the letters
should not change under different light
conditions, especially if a logo is in¬
volved. If the tubes are attached to raised
letters, their surface should not be too
striking. Consider the color and the in¬
tensity of the light as well as all design
elements in the immediate surround¬
ings. You can mount the tubes on three-
dimensional letters or directly on a col¬
ored background, but in the latter case
your letter spacing must be ample
enough to avoid blurring. Figure 437
shows possible arrangements of tubes on
three-dimensional letters.14 Variation 2

is especially useful, because the protrud¬
ing edges keep blurring to a minimum.
In variations 4 and 5 the surface of the
raised letter is indirectly illuminated, so
the letters appear as silhouettes. None of
these five versions looks its best during
daylight hours, because mounting the
tubes on raised letters creates a certain
restlessness. Aesthetically much more
pleasing are constructions where the
tubes are placed inside three-dimensional
letters and covered by a translucent
sheet of glass or acrylic. Good effects
can be created with side walls of con¬
trasting color. Since acrylic can be shaped
easily, it is possible to make the entire
structure except the base plate out of it.
Three-dimensional letters with diffuse
light effects can be mounted on a wall
or recessed into it totally or partially.
Figure 438 shows the most common
arrangements.

A third variation is to light the letters
indirectly. Here the three-dimensional
letters are open at the back and illumi¬
nated by tubes that are recessed into the
wall. The letters appear as silhouettes
(Figure 439).

A special form of either direct or indi¬
rect lighting consists of rectangular,
oval, or round shapes which totally en¬
close each transparent letter (Figures
440 and 441). Signs that are mounted on
roofs have to be visible against bright or
dark skies; the mounting hardware
should be as unobtrusive as possible.

Technical requirements for neon let¬
ters can be quite complex, and it is im¬
possible to comment on all of them in
detail. Problems with materials can stall
a project completely, so it is wise to
gather all relevant information from ap¬
propriate companies before any designs
are chosen.