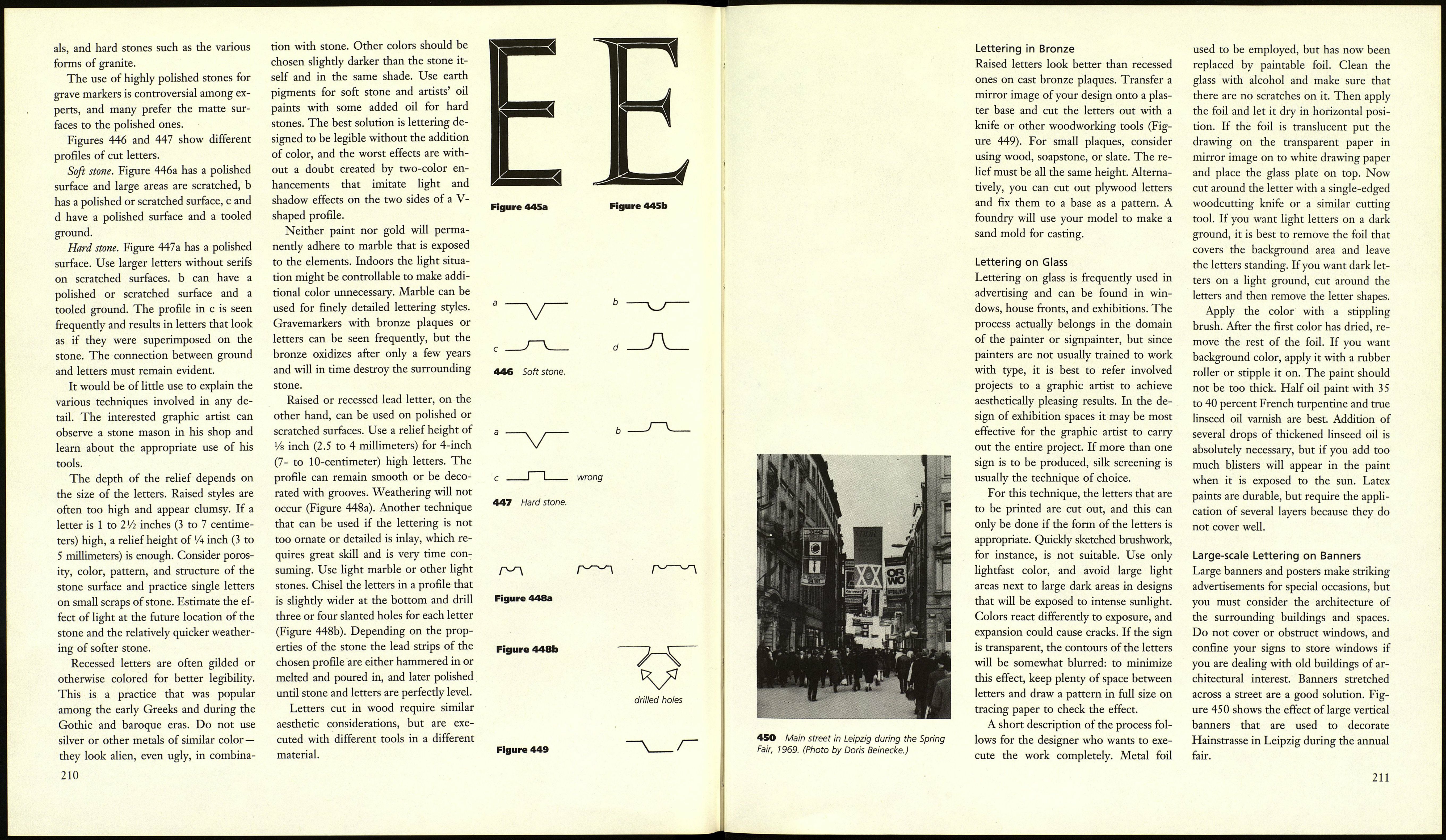 The range of choices is determined by
the type of material at hand. Lime, ce¬
ment, or mixed grounds, if they are new,
can be treated in fresco or sgraffito tech¬
nique. The structure of the surface
should be as smooth as possible. In in¬
dustrialized areas air pollution will attack
the surface of frescoes and eventually de¬
stroy them. Match colors to the content
of the ground — chalk, latex, oil, emul¬
sions, and mineral pigments all have spe¬
cific requirements, and their proper
management falls in the realm of pain¬
ters. For high-quality lettering it is
necessary to collaborate with painters,
who are not usually trained in lettering
design, and combine the specific skills of
graphic designer and painters. The
graphic designer will be responsible for
the choice of type and the arrangement
of letters and will produce a design as
well as a pattern drawing on paper, ide¬
ally in full size. He or she will also discuss
the colors and their technical require¬
ments with the workman, and assist in
the mixing of color samples.

Sgrafßto.15 Of all mural techniques,
sgraffito is described in detail because it
requires more than a simple transfer of
the design onto the ground, and it is dif¬
ficult to find specific instructions for the
process.

The earliest sgraffiti (sgraffiare — to
scratch) date from the Renaissance and
are found in northern Italy as weather-
resistant murals. The German architect
Gottfried Semper reintroduced this nearly
forgotten technique in the nineteenth
century for decorating the outside of
buildings. Modern architecture avails it¬
self of this technique for lettering on
facades or interior walls. It is, however,

15. Dr. Gerhard Winkler, Leipzig, was consultant
for this section.

necessary that the entire wall surface be
applied at the time of lettering.

The technical requirements must be
considered from the start. No intricate
details are possible; fat-face types cannot
be used because their thin strokes do not
withstand the weather well. Consider
the optical effect of shortening in per¬
spective, which can change the appear¬
ance of letter parts, especially when they
are thin.

It is best if the graphic artist person¬
ally transfers the design onto the wall
rather than leaving this job to workmen.
Beginners are advised to practice cutting
and scraping on sections of plaster. The
preparation of the wall itself and the
necessary material are best left to the
trained craftsman. The ingredients of
the plaster are slaked white lime and
sand, preferably washed river sand. The
sand should not contain clay and other
impurities, which may affect the firm¬
ness and color of the plaster. Lime and
sand are mixed in the proportions 1:3,
with slightly more lime for the first layer
than for succeeding ones. A small amount
of cement is added for exterior work. All
pigments used have to be lime-proof:
test before you start work by mixing the
paint with white lime and exposing it to
sunlight while wet. Some pigments may
contain ingredients that cause the plaster
to dull or bleed or develop a whitish
film. Unadulterated pigments are the
best choice. Many oxides are on the
market, but experience shows that earth
pigments last longest. These circum¬
stances restrict the available palette to
the following colors:

Black: vine black
Do not use more than one part pigment
to two parts plaster, for exterior or in¬
terior walls.

The tools used are wire loops and im¬
plements for scratching in different
widths, and these are available in stores
or can be improvised or made by any
smith (Figure 443).

Apply only as much plaster as you can
finish working in one session, and pro¬
tect outside walls during this time from
sun and rain with a tarpaulin. If you have
a choice, do your work during spring or
fall when air humidity is high, and avoid
work during very dry periods or under
intense sun.

The actual steps are as follows. A base
layer of mortar is applied to the wall,
with areas that are designated for the let¬
tering left half the thickness of the other
parts. The base layer must be left to dry
thoroughly and rewetted before the col¬
ored layer, about 'Л inch (5 millimeters)
thick, is applied. If additional layers of
color are desired, about two hours' dry¬
ing time should be allowed for each
layer. Finally, the layer of facade plaster
is applied. During the drying process a
thin transparent skin, or sinter, will form
on the plaster and the color will brighten,
which makes it possible to create letters
by scratching off the lighter top layer
even if no colored layer was placed un¬
derneath. This sintered layer also makes
later corrections impossible. If you trans¬
fer your design in the traditional way
with charcoal and pounce bag, the re¬
sulting dots will be incorporated in the
sinter and have to be removed during
cutting. It is therefore better only to
press the lines through. If the work time
exceeds ten hours the surface may begin
to chip. The sgraffito is done either by
cutting the letters into the plaster, to
make recessed colored letters, or cutting
away the surrounding area, creating

white raised letters on a colored back¬
ground. The scratching should only be
deep enough to expose the top of the
colored layer. The lower edges on letters
that are exposed to the elements must be
beveled to keep water from collecting in
the corners (Figure 444).

Lettering Design for Stone Carving16
Lettering on stone for memorial tablets,
gravestone markers, and plaques on pub¬
lic buildings is the specialty of stone ma¬
sons. Unfortunately most of them have
little or no education in the field of type
design and often choose the worst of a
limited and outdated selection of pat¬
terns. The graphic designer, on the other
hand, often has no concept of the special
requirements of the material or of the
chiselling process. Many drawn or writ¬
ten letters cannot be transferred to the
medium of stone, and what looks good
on polished granite might be impossible
on travertine. The following instruc¬
tions cannot turn a stone mason into a
graphic designer or vice versa, but they
might further understanding of basic
procedure to make productive coopera¬
tion possible.

Best suited for letters cut in stone are
the letters that we find on monumental
inscriptions — roman capitals, sans serifs,
and faces with little contrast in the
stroke widths (Figure 445a). The capitals
of Gill Sans are a good example, if the
M is slightly modified. Frequent models
are the capitals of the Trajan Column
with their pointed serifs and light con¬
trasts in stroke width (Figure 445b).
Other good choices are capitals of other
condensed sans serifs if the stroke width
is fairly narrow. Both raised and recessed
versions are possible. The use of roman

16. This section was written in cooperation with
the sculptor Fritz Przibilla, Leipzig.

lowercase, however, is questionable, be¬
cause these letters were developed as
bookhand, and the chisel would have to
imitate the movements of the pen. Lower¬
case roman letters are neither simple
enough to be monumental, nor rich
enough in detail to be decorative. All
other styles that developed their charac¬
teristics from the motion of the pen
stroke are equally unsuited to transfer
into stone.

A possible exception are the baroque
italics and fraktur styles of the thirteenth
to seventeenth centuries. They can be
found on old grave markers and have
great decorative appeal. Their details
lend themselves to the expressive range
of the stone mason's tools. The stones
themselves were often round in shape
and their surfaces slightly convex. Tex¬
tura was usually worked in raised letters,
fraktur and italic recessed.

Old graveyards and churches are rich
sources of inspiration for the student of
historic lettering styles. Rubbings can be
taken by taping paper over the stone and
rubbing with the flat side of a piece of
chalk or wax crayon over the letters until
their shapes become visible on the
paper.

When you design a text for a stone
cutting, keep in mind that your tool is a
chisel with a specific range of possibilities.
Draw the contours of the letters only on
tracing paper and leave detail forms to
the mason. Specify the format and the
placement of the text on the stone. Short
inscriptions look best in a symmetrical
arrangement: longer text should be set
flush left. Let the mason transfer the text
onto the stone.

There are two categories of stone:
soft stones such as sandstone, limestone,
and marble, and artificial stone materi-