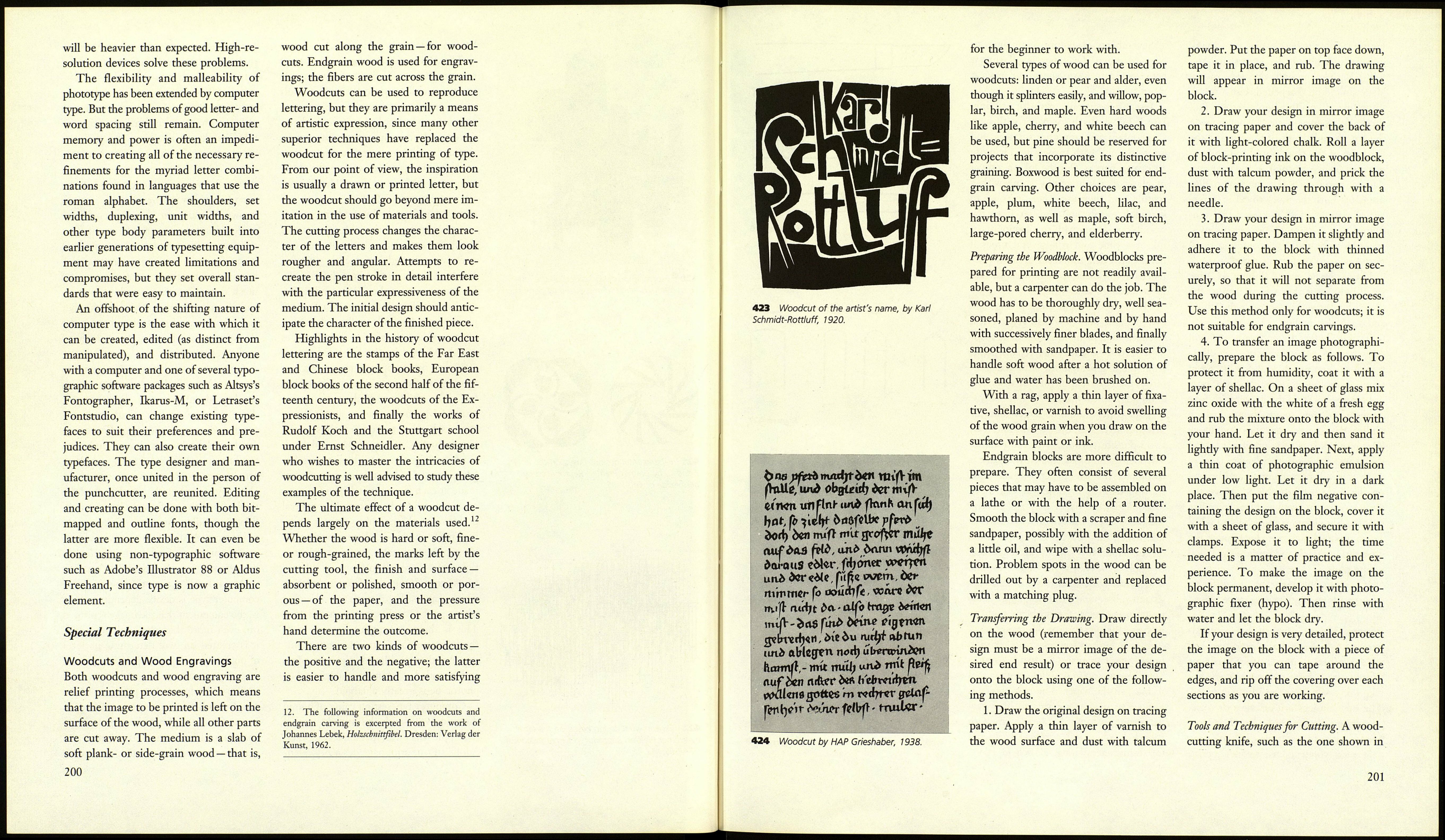 If you are dealing with final artwork
and your original is a photograph, do
not draw directly on it. The smooth sur¬
face makes lettering difficult, and the
pencil lines will leave marks on the
finish. Mistakes cannot be fixed with
opaque white, or, in the case of negative
letters, with black, without disappoint¬
ing results. Retouching errors could
only be corrected by washing the photo,
and it would be impossible to use it a
second time. It is a better procedure to
make a separate proof of the text and let
the printer superimpose it phototechni-
cally on the picture.

Developed in the 1950s, phototypeset¬
ting rapidly supplanted the various metal
typesetting methods over the following
twenty years. Phototype, produced from
one, or at most two, master pieces of art
(type) could be enlarged to any size and
in any configuration both quickly and
economically. The use of different lenses
in photo reproduction made it possible
to change the height and width propor¬
tions, slant letters (oblique) and distort
them.

The maturation of phototypesetting
in the early 1960s made it possible to
overcome many of the major limitations
of metal type, whether foundry or
machine. Phototypesetting removed the
physical aspect of type. No longer was
the type body immutable (or nearly so).
Letters could be set close to one another
— both horizontally and vertically — as
one wanted. They could even be over¬
lapped. The shoulder of metal type and
the set width of individual characters
could be violated. This meant that let-
terspacing and kerning could be more
easily perfected. We, Ту, Yo and other
troublesome letter combinations could

now be fixed without the use of saw or
file. Letters such as/or у could be prop¬
erly kerned or fitted together, allowing
designers to draw them without any
compromises created by body width or
duplexing (forcing italic letters to the
same width as accompanying roman).
Since phototype did away with metal let¬
ters, it also did away with metal spacing
material. Leading became an anach¬
ronistic term. Line spacing, or linefeed,
could be adjusted in fractional point in¬
crements. It could also be done "nega¬
tively," making the space between lines
less than what would have been achieved
if the type was set solid (with no lead¬
ing). This was especially useful where
descenders and ascenders were infrequent
or, as in much advertising, copy was
brief.

In freeing type of its physical con¬
straints phototypesetting inevitably made
it lighter and less burdensome. Instead
of storing enormously heavy cases of
foundry type, typesetters had film strips,
discs, or glass grids. The setting of large
type, especially above 96 points, was
now a simple matter of photographic en¬
largement. Weight was not an impedi¬
ment. Similarly, typefaces could be
created at any font size desired, not just
the traditional incremental sizes of 6
through 14 points, 16, 18, 24, 30, 36,
etc. Type could be made to fit a specific
layout rather than vice versa.

Phototypesetting made type malle¬
able. Individual characters could be
manipulated at will. They could be
stretched, expanded, condensed — even
distorted — all by using a variety of cam¬
era lenses. Often typefaces were slanted
to create companion "italic" faces where
none existed before. And type could be
slanted backwards as well as forwards.

Additionally, phototypesetting made
it possible to combine multiple typefaces
in a single line or word. A common

420 Experimental design based on the letter
0, by Werner Pfeiffer. Reproduced by permission
of GRAPHIS.

421 Experimental designs based on the letters
Z and C, by Werner Pfeiffer. Reproduced by
permission of GRAPHIS.

422 Experimental design based on the letter F,
by Werner Pfeiffer. Reproduced by permission of
GRAPHIS.

The 1960s witnessed an explosion of
new typefaces and a burst of typographic
creativity and experimentation as a result
of the change in technology. Since type
designers no longer had to concern them¬
selves with the limitations of punch-
cutting, engraving, and casting, they
could create typefaces with more flam¬
boyance and eccentricity. The camera
allowed any set of drawn letters to be¬
come a typeface. And it made it possible
to revive many of the older designs of
the past, especially those of the fre¬
quently maligned nineteenth century.
Much of the style of typography in the
United States in the 1960s and 1970s
can be attributed to the influence of
phototype. But like all technology,
phototypesetting has its disadvantages
and drawbacks. Its flexibility led, in the
1970s, to overly tight letterspacing, not
to mention frequent overlapping of let¬
ters. The ability to scale innumerable
sizes of type from one, or at most two,
masters has led to compromises in the
visual quality of type when enlarged.
Serifs and hairlines or thin strokes be¬
come ungainly. The minute adjustments
made at each size in metal type for opti¬
cal reasons have been lost. The general
problems of photography—proper focus¬
ing, fresh chemicals, dimensionally sta¬
ble paper or substrate, accurate exposure
time, etc.— are all present in photo¬
typesetting. One problem is halation
which causes light traps or clogging
where acute strokes meet in a letter.
This is the photographic equivalent of
the ink traps found in letterpress print¬
ing. Another problem is the soft edges
and rounded corners that occur when
phototype is greatly enlarged.

Computer typesetting came of age in
the mid-1980s with the introduction of
the Apple Macintosh personal computer,
Adobe's PostScript page description lan¬

guage, and imagesetters such as Mergen-
thaler's Linotronic 300. Computer type¬
setting creates letters either through bit-
mapping (also known as rasterization) or
outlining. Bitmapping places a grid over
a drawn character and tries to approxi¬
mate its shape. The finer the grid, the
more accurately the character is repro¬
duced. Outlines trace the edge of a
drawn character, frequently through the
use of complex mathematical equations
known as Bezier curves, and then fill the
enclosed space. The result is usually a
more accurate rendition than with bit-
mapping, but more computer power is
required. The fineness of the grid or
mesh determines how subtle a bitmap¬
ped character will be, while the number
and placement of control points for the
Bezier curves influences the quality of
outline characters.

Computer, or digital, typesetting, is
an extension of phototypesetting, with
similar advantages and disadvantages.
Type can be scaled, condensed, ex¬
panded, distorted, and slanted both for¬
wards and backwards; letters and lines
can be set as close or far apart as wished,
set along contours and curves, and so on.
When type is created by outline (and the
thickness of the outline can be adjusted),
filled in solidly or with an infinite variety
of patterns. And, of course, these effects
can be combined. Such tricks turn letters
into graphic images rather than type.

As with all typesetting technology,
computer type is device-dependent. That
is, the equipment that the image is printed
on, even more than the equipment that
it is created on, will determine its level
of quality. Type may be printed on a dot
matrix printer or a low-resolution laser
printer (300 dpi or dots per inch) or on
a high-resolution imagesetter (2540 dpi).
In the former instance the type will ap¬
pear jagged or coarse; the letter and
wordspacing will be erratic; and letters