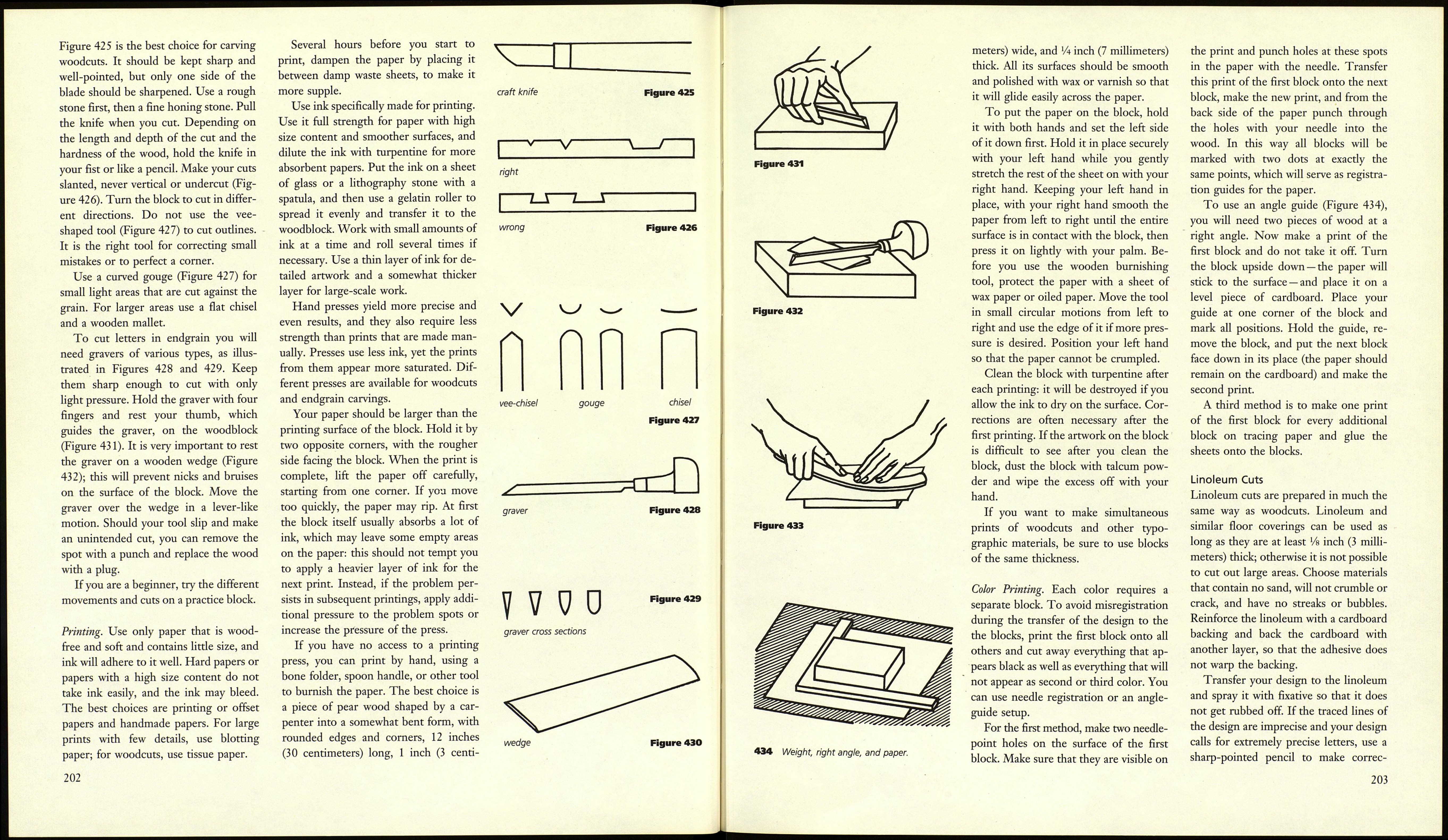 will be heavier than expected. High-re¬
solution devices solve these problems.

The flexibility and malleability of
phototype has been extended by computer
type. But the problems of good letter- and
word spacing still remain. Computer
memory and power is often an impedi¬
ment to creating all of the necessary re¬
finements for the myriad letter combi¬
nations found in languages that use the
roman alphabet. The shoulders, set
widths, duplexing, unit widths, and
other type body parameters built into
earlier generations of typesetting equip¬
ment may have created limitations and
compromises, but they set overall stan¬
dards that were easy to maintain.

An offshoot of the shifting nature of
computer type is the ease with which it
can be created, edited (as distinct from
manipulated), and distributed. Anyone
with a computer and one of several typo¬
graphic software packages such as Altsys's
Fontographer, Ikarus-M, or Letraset's
Fontstudio, can change existing type¬
faces to suit their preferences and pre¬
judices. They can also create their own
typefaces. The type designer and man¬
ufacturer, once united in the person of
the punchcutter, are reunited. Editing
and creating can be done with both bit¬
mapped and outline fonts, though the
latter are more flexible. It can even be
done using non-typographic software
such as Adobe's Illustrator 88 or Aldus
Freehand, since type is now a graphic
element.

Woodcuts and Wood Engravings
Both woodcuts and wood engraving are
relief printing processes, which means
that the image to be printed is left on the
surface of the wood, while all other parts
are cut away. The medium is a slab of
soft plank- or side-grain wood — that is,

wood cut along the grain —for wood¬
cuts. Endgrain wood is used for engrav¬
ings; the fibers are cut across the grain.

Woodcuts can be used to reproduce
lettering, but they are primarily a means
of artistic expression, since many other
superior techniques have replaced the
woodcut for the mere printing of type.
From our point of view, the inspiration
is usually a drawn or printed letter, but
the woodcut should go beyond mere im¬
itation in the use of materials and tools.
The cutting process changes the charac¬
ter of the letters and makes them look
rougher and angular. Attempts to re¬
create the pen stroke in detail interfere
with the particular expressiveness of the
medium. The initial design should antic¬
ipate the character of the finished piece.

Highlights in the history of woodcut
lettering are the stamps of the Far East
and Chinese block books, European
block books of the second half of the fif¬
teenth century, the woodcuts of the Ex¬
pressionists, and finally the works of
Rudolf Koch and the Stuttgart school
under Ernst Schneidler. Any designer
who wishes to master the intricacies of
woodcutting is well advised to study these
examples of the technique.

The ultimate effect of a woodcut de¬
pends largely on the materials used.12
Whether the wood is hard or soft, fine-
or rough-grained, the marks left by the
cutting tool, the finish and surface —
absorbent or polished, smooth or por¬
ous—of the paper, and the pressure
from the printing press or the artist's
hand determine the outcome.

There are two kinds of woodcuts —
the positive and the negative; the latter
is easier to handle and more satisfying

12. The following information on woodcuts and
endgrain carving is excerpted from the work of
Johannes Lebek, Holzscbnittfibel. Dresden: Verlag der
Kunst, 1962.

for the beginner to work with.

Several types of wood can be used for
woodcuts: linden or pear and alder, even
though it splinters easily, and willow, pop¬
lar, birch, and maple. Even hard woods
like apple, cherry, and white beech can
be used, but pine should be reserved for
projects that incorporate its distinctive
graining. Boxwood is best suited for end-
grain carving. Other choices are pear,
apple, plum, white beech, lilac, and
hawthorn, as well as maple, soft birch,
large-pored cherry, and elderberry.

Preparing the Woodblock. Woodblocks pre¬
pared for printing are not readily avail¬
able, but a carpenter can do the job. The
wood has to be thoroughly dry, well sea¬
soned, planed by machine and by hand
with successively finer blades, and finally
smoothed with sandpaper. It is easier to
handle soft wood after a hot solution of
glue and water has been brushed on.

With a rag, apply a thin layer of fixa¬
tive, shellac, or varnish to avoid swelling
of the wood grain when you draw on the
surface with paint or ink.

Endgrain blocks are more difficult to
prepare. They often consist of several
pieces that may have to be assembled on
a lathe or with the help of a router.
Smooth the block with a scraper and fine
sandpaper, possibly with the addition of
a little oil, and wipe with a shellac solu¬
tion. Problem spots in the wood can be
drilled out by a carpenter and replaced
with a matching plug.

Transferring the Drawing. Draw directly
on the wood (remember that your de¬
sign must be a mirror image of the de¬
sired end result) or trace your design
onto the block using one of the follow¬
ing methods.

1. Draw the original design on tracing
paper. Apply a thin layer of varnish to
the wood surface and dust with talcum

powder. Put the paper on top face down,
tape it in place, and rub. The drawing
will appear in mirror image on the
block.

2. Draw your design in mirror image
on tracing paper and cover the back of
it with light-colored chalk. Roll a layer
of block-printing ink on the woodblock,
dust with talcum powder, and prick the
lines of the drawing through with a
needle.

3. Draw your design in mirror image
on tracing paper. Dampen it slightly and
adhere it to the block with thinned
waterproof glue. Rub the paper on sec¬
urely, so that it will not separate from
the wood during the cutting process.
Use this method only for woodcuts; it is
not suitable for endgrain carvings.

4. To transfer an image photographi¬
cally, prepare the block as follows. To
protect it from humidity, coat it with a
layer of shellac. On a sheet of glass mix
zinc oxide with the white of a fresh egg
and rub the mixture onto the block with
your hand. Let it dry and then sand it
lightly with fine sandpaper. Next, apply
a thin coat of photographic emulsion
under low light. Let it dry in a dark
place. Then put the film negative con¬
taining the design on the block, cover it
with a sheet of glass, and secure it with
clamps. Expose it to light; the time
needed is a matter of practice and ex¬
perience. To make the image on the
block permanent, develop it with photo¬
graphic fixer (hypo). Then rinse with
water and let the block dry.

If your design is very detailed, protect
the image on the block with a piece of
paper that you can tape around the
edges, and rip off the covering over each
sections as you are working.

Tools and Techniques for Cutting. A wood¬
cutting knife, such as the one shown in