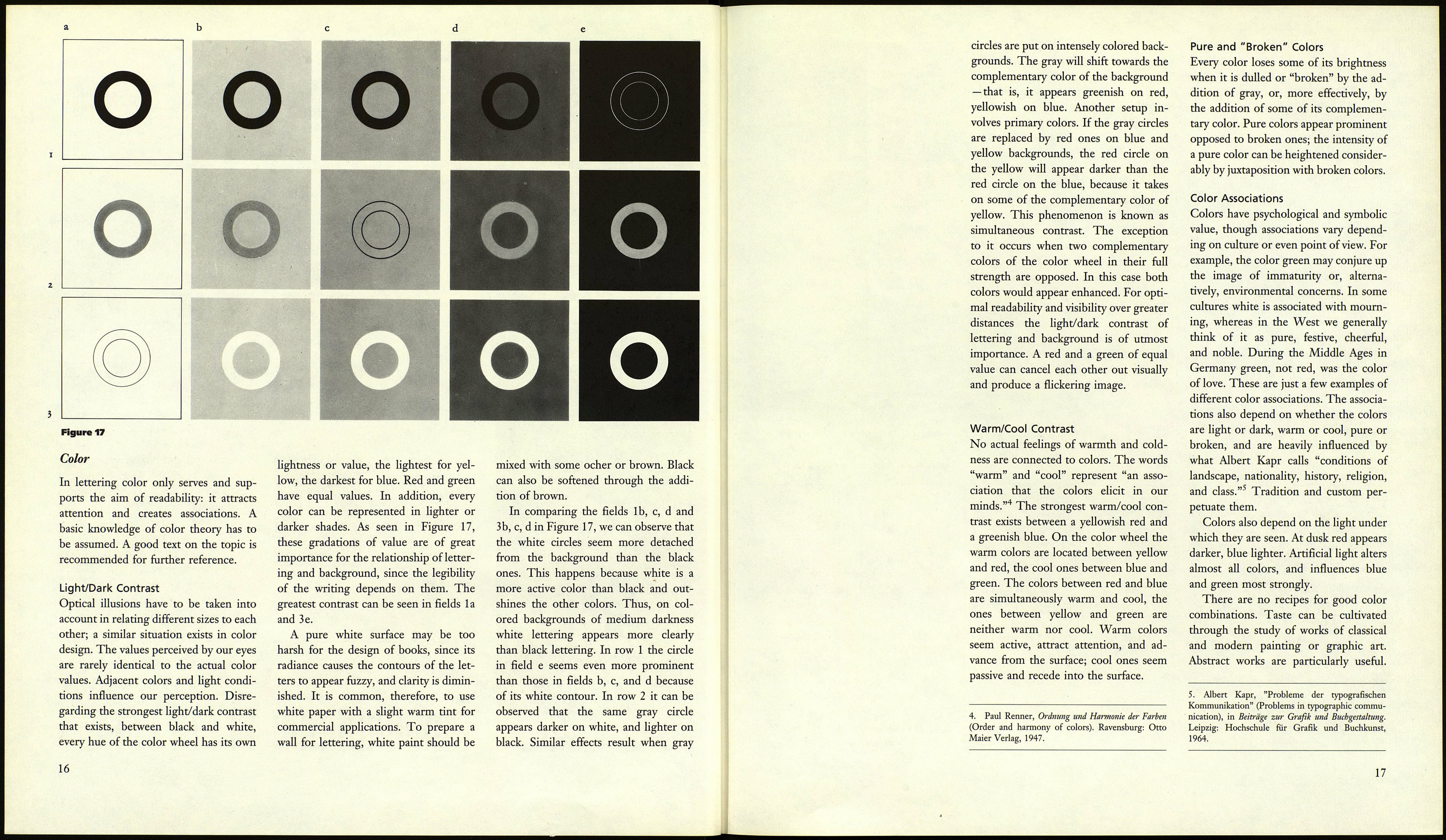 and proportion are of utmost impor¬
tance, because they create tension and
interest. If the units are similar to each
other, repetition is strengthened and the
rhythm is weakened. In extreme cases
the rhythm disappears entirely. Design
is therefore based on the rhythmical
arrangement of subunits. It is based
on tension, not on monotony. On a two-
dimensional surface rhythm is realized
through the repetition of graphic con¬
trasts, or, more precisely, through con¬
trast pairs. This can be accomplished in
one of the following ways:

1. In the sequence of movements that
are used to define the letterform
— the elements of the rhythm and
their relationship may be vertical,
horizontal, diagonal, and circular.

2. Within the letterforms themselves
there may be round or pointed,
thick or thin, large or small parts.
The interior and exterior of the
forms may also contrast.

3. Through rhythmical structure
created by such factors as the
position of a form on the page
and its relationship to the center
axis; forms and interior forms of
words, and the entire page layout
itself; the structure of the text
through paragraphing, sizes and
weights of type; colors; the re¬
lationship of groups of words to
empty space; the boundaries of
the page and its height and width;
empty space.

All these factors are interdependent.
The rhythm of movement helps create
the form. The rhythmical elements of
separate shapes structure the page.
Rhythm unites movement, form, and
surface in an organic whole, and the
same rules apply to small sections and
to the entire work.

We know from experience that the mea¬
surements that we perceive through
our eyes are unreliable. Optical illusions
have to be taken into account seriously.
As Emil Ruder says, "The optical and
aesthetic image in the mind is superior
to the true geometrical construction;
therefore black and white has to be ba¬
lanced according to this mental image."3

Figures 7 through 16 illustrate some
of the illusions we must deal with.

Figure 7 shows a geometrically cor¬
rect square. It seems to be wider than
it is high. Similarly, a true circle will
appear to squat.

Figure 8 shows two rectangles of
exacdy the same size. The upright one
appears to be narrower than the other
one.

The two areas in Figure 9 are bor¬
dered by two horizontal and two vertical
lines respectively. The former appears
wider, the latter taller.

When horizontal lines are combined
into a block as on a written page, the
image seems taller (Figure 10).

The squares in Figure 11 are identi¬
cal, but the one on the larger format
seems smaller than the square on the
smaller format.

Not only the immediate surrounding
of a particular form or group of shapes
is important, but also the sizes of neigh¬
boring forms. The middle squares in
Figures 12 and 13 are again identical,
but large surrounding shapes make one
appear smaller than another.

Figure 14 shows that light-colored
sections or letters of a negative type ap¬
pear larger than darker spaces or letters
of the same size. White or light colors
radiate beyond their boundaries.

Figure 15 shows that a line with fewer
segments will seem shorter than one of
the same length with many segments.
For this reason the lines of a wide or
large typeface appear shorter than those
of a smaller or narrower type.