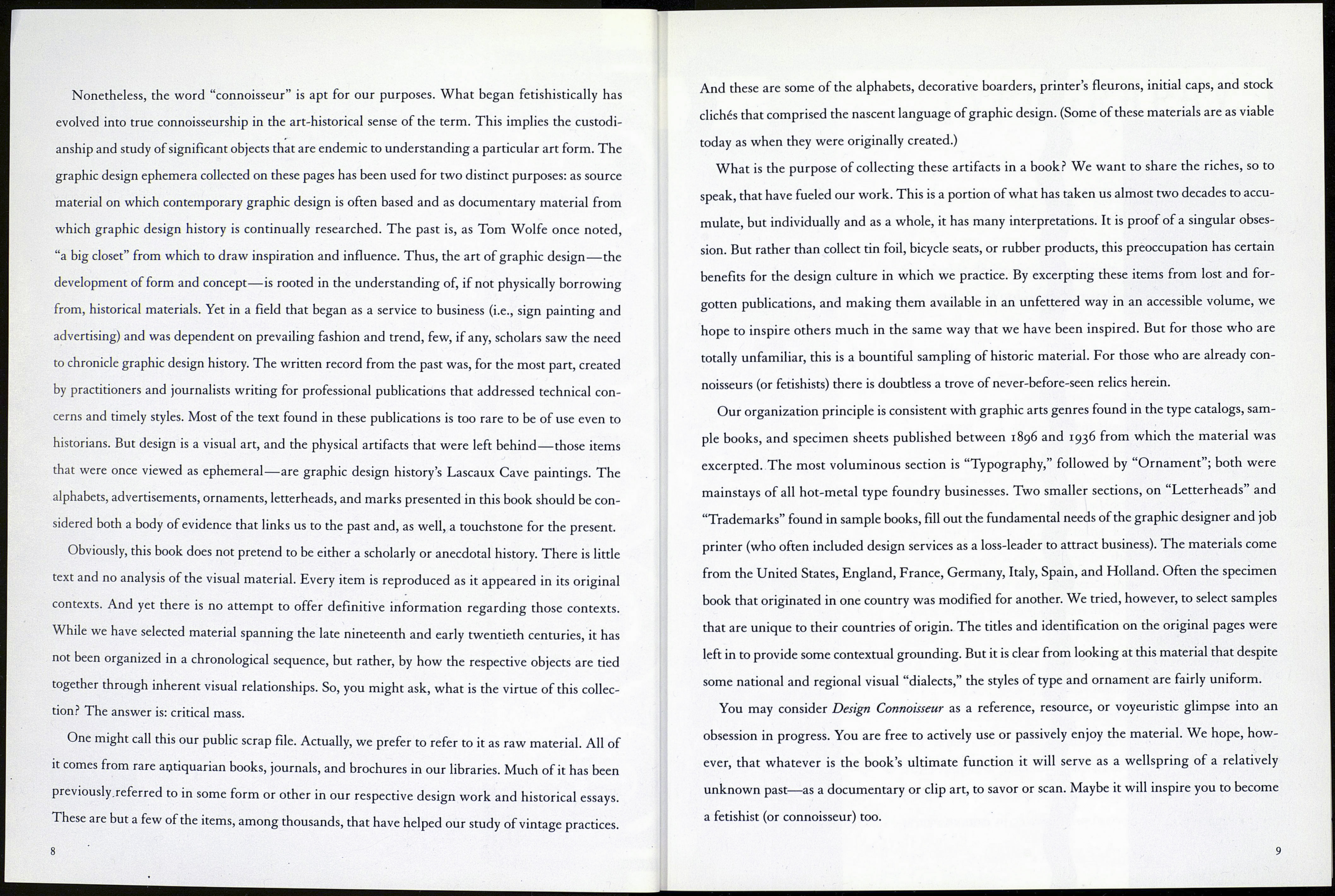 Nonetheless, the word “connoisseur” is apt for our purposes. What began fetishistically has
evolved into true connoisseurship in the art-historical sense of the term. This implies the custodi¬
anship and study of significant objects that are endemic to understanding a particular art form. The
graphic design ephemera collected on these pages has been used for two distinct purposes: as source
material on which contemporary graphic design is often based and as documentary material from
which graphic design history is continually researched. The past is, as Tom Wolfe once noted,
“a big closet” from which to draw inspiration and influence. Thus, the art of graphic design—the
development of form and concept—is rooted in the understanding of, if not physically borrowing
from, historical materials. Yet in a field that began as a service to business (i.e., sign painting and
advertising) and was dependent on prevailing fashion and trend, few, if any, scholars saw the need
to chronicle graphic design history. The written record from the past was, for the most part, created
by practitioners and journalists writing for professional publications that addressed technical con¬
cerns and timely styles. Most of the text found in these publications is too rare to be of use even to
historians. But design is a visual art, and the physical artifacts that were left behind—those items
that were once viewed as ephemeral—are graphic design history’s Lascaux Cave paintings. The
alphabets, advertisements, ornaments, letterheads, and marks presented in this book should be con¬
sidered both a body of evidence that links us to the past and, as well, a touchstone for the present.

Obviously, this book does not pretend to be either a scholarly or anecdotal history. There is little
text and no analysis of the visual material. Every item is reproduced as it appeared in its original
contexts. And yet there is no attempt to offer definitive information regarding those contexts.
While we have selected material spanning the late nineteenth and early twentieth centuries, it has
not been organized in a chronological sequence, but rather, by how the respective objects are tied
together through inherent visual relationships. So, you might ask, what is the virtue of this collec¬
tion? The answer is: critical mass.

One might call this our public scrap file. Actually, we prefer to refer to it as raw material. All of
it comes from rare antiquarian books, journals, and brochures in our libraries. Much of it has been
previously.referred to in some form or other in our respective design work and historical essays.
These are but a few of the items, among thousands, that have helped our study of vintage practices.

And these are some of the alphabets, decorative boarders, printer’s fleurons, initial caps, and stock
clichés that comprised the nascent language of graphic design. (Some of these materials are as viable
today as when they were originally created.)

What is the purpose of collecting these artifacts in a book? We want to share the riches, so to
speak, that have fueled our work. This is a portion of what has taken us almost two decades to accu¬
mulate, but individually and as a whole, it has many interpretations. It is proof of a singular obses¬
sion. But rather than collect tin foil, bicycle seats, or rubber products, this preoccupation has certain
benefits for the design culture in which we practice. By excerpting these items from lost and for¬
gotten publications, and making them available in an unfettered way in an accessible volume, we
hope to inspire others much in the same way that we have been inspired. But for those who are
totally unfamiliar, this is a bountiful sampling of historic material. For those who are already con¬
noisseurs (or fetishists) there is doubtless a trove of never-before-seen relics herein.

Our organization principle is consistent with graphic arts genres found in the type catalogs, sam¬
ple books, and specimen sheets published between 1896 and 1936 from which the material was
excerpted. The most voluminous section is “Typography,” followed by “Ornament ; both were
mainstays of all hot-metal type foundry businesses. Two smaller sections, on “Letterheads” and
“Trademarks” found in sample books, fill out the fundamental needs of the graphic designer and job
printer (who often included design services as a loss-leader to attract business). The materials come
from the United States, England, France, Germany, Italy, Spain, and Holland. Often the specimen
book that originated in one country was modified for another. We tried, however, to select samples
that are unique to their countries of origin. The titles and identification on the original pages were
left in to provide some contextual grounding. But it is clear from looking at this material that despite
some national and regional visual “dialects,” the styles of type and ornament are fairly uniform.

You may consider Design Connoisseur as a reference, resource, or voyeuristic glimpse into an
obsession in progress. You are free to actively use or passively enjoy the material. We hope, how¬
ever, that whatever is the book’s ultimate function it will serve as a wellspring of a relatively
unknown past—as a documentary or clip art, to savor or scan. Maybe it will inspire you to become
a fetishist (or connoisseur) too.