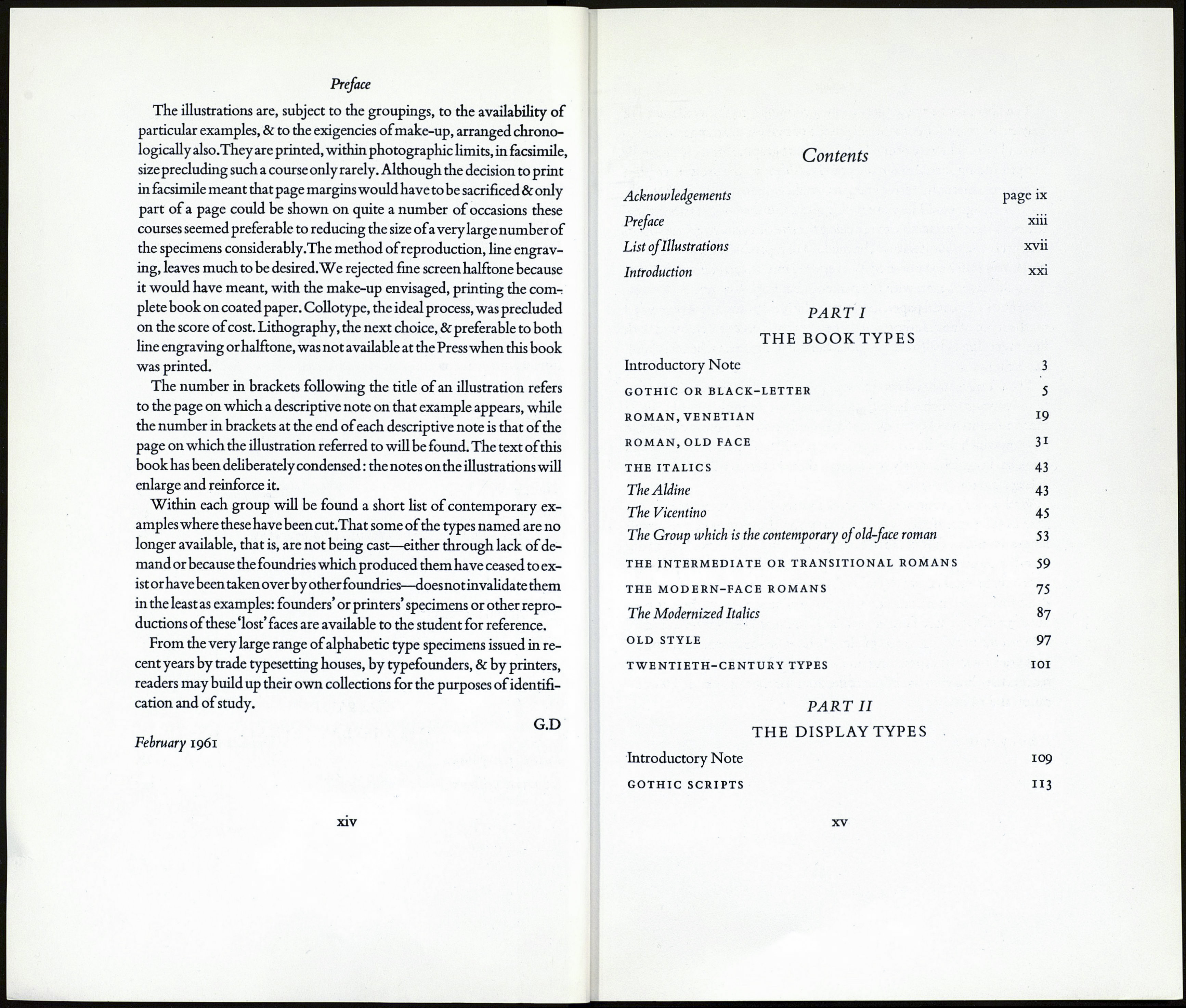 The next step in the study of type is to learn
to recognize the various forms or 'tribes' of type
and the subtle differentiations between varieties
of the same general form of type-face.These
differences are very slight; often to the casual
observer no differences appear. There is no way
to learn to recognize them except by training

Printing Types, Their History, Forms, and Use, 1937

Of every class of type there are many forms, but
one or two forms only that are the best.We can
learn what these best forms are by knowing what
early handwriting and early type was, and what early
printers meant to do. Only when we understand
their problem can we justly judge how well they
solved it.To see what the manuscripts were that
they tried to reproduce in type is a step to this
knowledge ; to see how forms produced by a pen
were changed when rendered in metal is another.
A third step is the realization of the influence of
history, nationality, scholarship, and custom upon
type-forms. We must also have a comprehension of
the evolution of economic problems—how cheaper
books were demanded, how that want was met,
and what its effect was on types and their use.The
ability to recognize all this can be arrived at only
by that historical perspective and that training of
the eye which is gained by study and observation.

But any one may arrive at sound conclusions as
to types, if he knows thoroughly the history of
type-forms, has an eye sensitive to their variations,
and has familiarized himself with the ways in which
they have been employed by masters of typography.

This book is intended simply as an introduction to a subject which has
already been well documented byD.B.Updike, A. F.Johnson, Stanley
Morison, Paul Beaujon, Harry Carter, James Wardrop and others. It
has been written to help those students who have not as yet had an op¬
portunity to study the work of these authors with any thoroughness,
if indeed at all: or, having both opportunity and inclination, yet feel
dismayed at the immensity of the subject—covering as it does so many
countries and compassing a period of over five hundred years. From
that point it may only be a short step to questioning the need to delve
into the history of printing types at all : to regard it as a field remote from
present day needs & the task of earning a living, in fact, one best left to
scholars—to the historians of printed books and ephemera—some of
whom they realize may already have devoted a lifetime to such research.

Yet without some knowledge of the history of type faces—of the his¬
torical, personal, economic, industrial, & other factors which determin¬
ed the development of types in certain ways at certain times—& without
some familiarity with the ways in which the great printer-publishers
of the past have used those types, we cannot hope to be able to identify
type faces, to choose them intelligently, to mix them with assurance, or
to produce with them work having that quality of inevitability which
the late Mr Bruce Rogers said always marked successful typography.

In this Introduction types have been grouped and the groups appear in
chronological order. Each group of faces is prefaced with a brief histor¬
ical note, the material for which in most instances I am entirely indebted
to the historians cited above. Following these historical notes, and con¬
fined to the book faces, are notes on the characteristics of the types in
the particular groups, written in the hope that they will help to facili¬
tate the identification of individual specimens. For these analyses I am
especially indebted to Mr A. F.Johnson of the Department of Printed
Books, British Museum,and also to Mr W.Turner Berry, until recently
Librarian of the St Bride Foundation Printing Library.