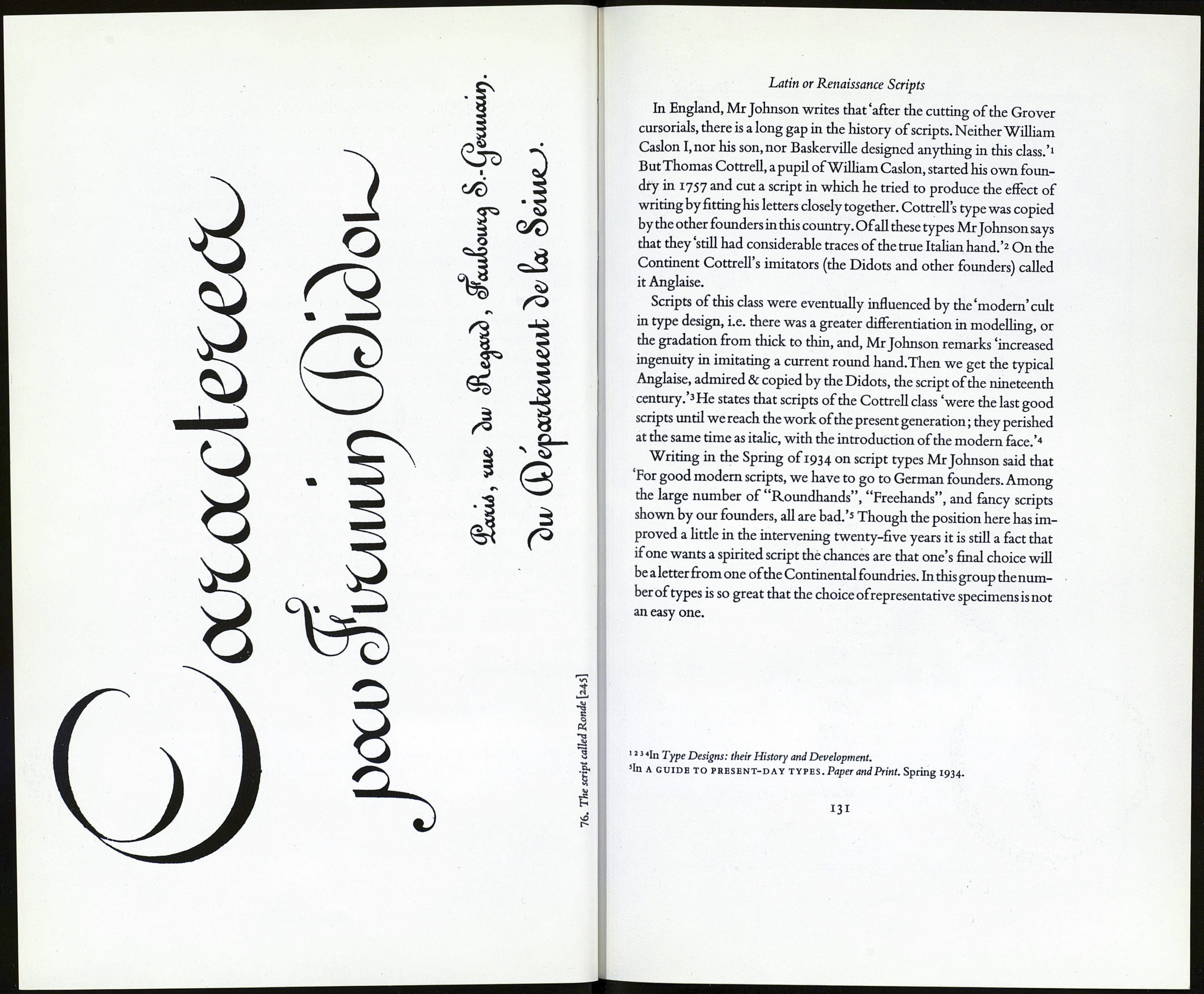 eighteenth century.'i Mr Johnson records only those of Pierre Moreau,
a professional calligrapher who lived in Paris, and one English script
type, in the previous century. Moreau first produced books printed
from engraved plates and then experimented with script types, which
like the earlier gothic scripts, he designed for book work, i.e. as types for
continuous reading. Altogether, in six years (1643-1648) Moreau print¬
ed about a dozen books in his bâtarde italienne. See the example, p. 13 5.
His types, after passing through several hands, were finally bought by
the Imprimerie Royale in 1787 and one oftheir last uses was in the print¬
ing of paper money.

Latin scripts in England in the seventeenth century were a rarity.
Mr Morison shows specimens of the first Latin script that he had been
able to discover in use in England as illustrations to his article on script
types.* He remarks of it that it 'is a very fine one, so fine that one im¬
mediately suspects it of foreign manufacture.^ See illustration, p. 13 8.

The next English scripts to be considered are the Cursorials issued
by the Grover foundry about 1700. These Cursorials were described
by Mores in his Dissertation :'The Cursorial is a flimsey type imitating
a pseudo Italian handwriting, and fitted for ladies and beaux'* Five of
the six sizes originally belonging to the Grover's Foundry (the largest
English foundry in the seventeenth century) are still in the possession of
Stephenson Blake of Sheffield, coming into their hands through those
of three other founders. See the illustration, page 139. It is thought that
the first cursorials were cut to imitate the MS news sheets circulated in
the coffee houses of the day. All these cursorials were of poor design.

On the Continent from this time onwards Latin scripts appeared in
great numbers. Even Germany, the home of gothic, succumbed, and
German typecutters produced specimens of Latin scripts. In Italy G.B.
Bodoni cut dozens of scripts, and, knowing little of the history of hand¬
writing, gave them bewilderingly confusing titles.