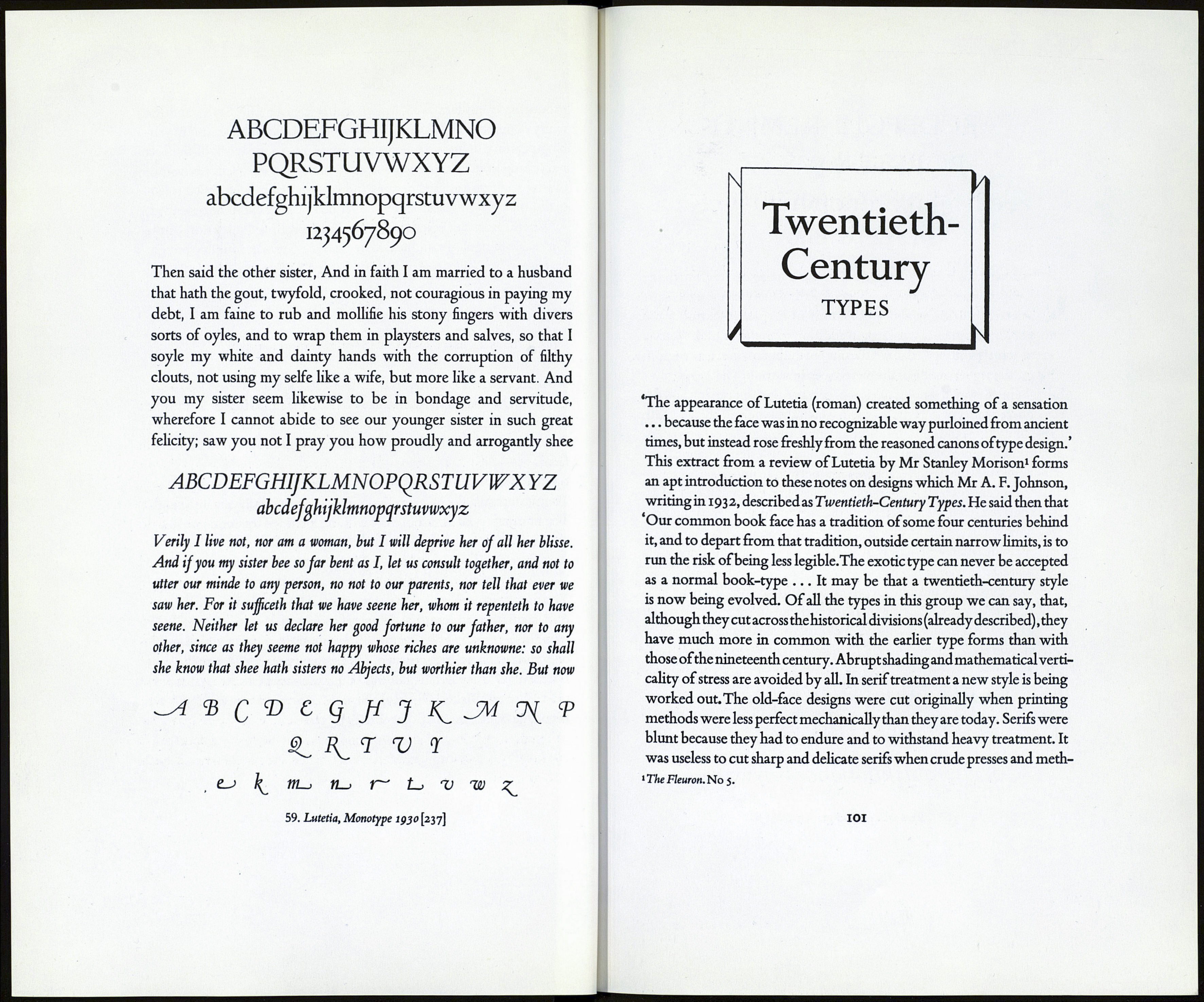 petent hands of Pickering and of Whittingham—was regarded by Mr
Updike as'the chief typographic event of the mid-nineteenth century.'1
Since that day Caslon Old Face has suffered no further eclipse but has
gained steadily, if at times slowly, in popularity.

In 1860 Alexander Phemister cut for Miller & Richard a face which
was first shown by those founders in a specimen issued in that year. It
was called Old Style and the following note accompanied the speci¬
men: 'Type of the old style of face (they meant, of course old-face de¬
signs such as Caslon Old Face) is now frequently used—more especi¬
ally for the finer class of book-work ; as however the faces which were
cut in the early part of the last century are now unpleasing both to the
eye of the critic and to the general reader, on account of the inequality
of size and consequent irregularity of ranging, the subscribers have
been induced to produce this series in which they have endeavoured
to avoid the objectionable peculiarities whilst retaining the distinctive
characteristics of the medieval2 (sic) letter.' Below are shown 24 point
roman and italic alphabets of the i860 design.

"In Printing Types, Their History, Forms, and Use. Vol II.
2For medieval letter read old face.

producing a modern face. Miller and Richard's Old Styles and the
many copies thereof have enjoyed wide use both in book and in job¬
bing printing up to the present day, but now, in the work of the best
publishing houses have been ousted by the many excellent revivals of
old-face and transitional designs and by what have been called twen¬
tieth century type face designs, the group of faces next to be described.
When Phemister settled in America he produced a version of the
Old Style design—Franklin Old Style. One German foundry bought
matrices from Miller & Richard and named the face English Mediaeval !

Gradual, though this is not so in all versions of Old Style.

Bracketed and inclined, lighter and more sharply cut than in the old
faces.

There is a regularity and certain sharpness of cut which are 'modern'.
The uniformity of width in the capitals is a relic of the modern face.

The foundry responsible for the original Old Style design, Miller
& Richard, no longer exists. Much of its material (matrices, etc) is
now the property of Stephenson Blake but the purchases included
only the punches and matrices of the 14 point size of Miller and
Richard's Old Style. This size was bought to complete the range
of Stephenson Blake's Old Style N02. Monotype, Linotype and
Intertype offer versions of the Old Style face.